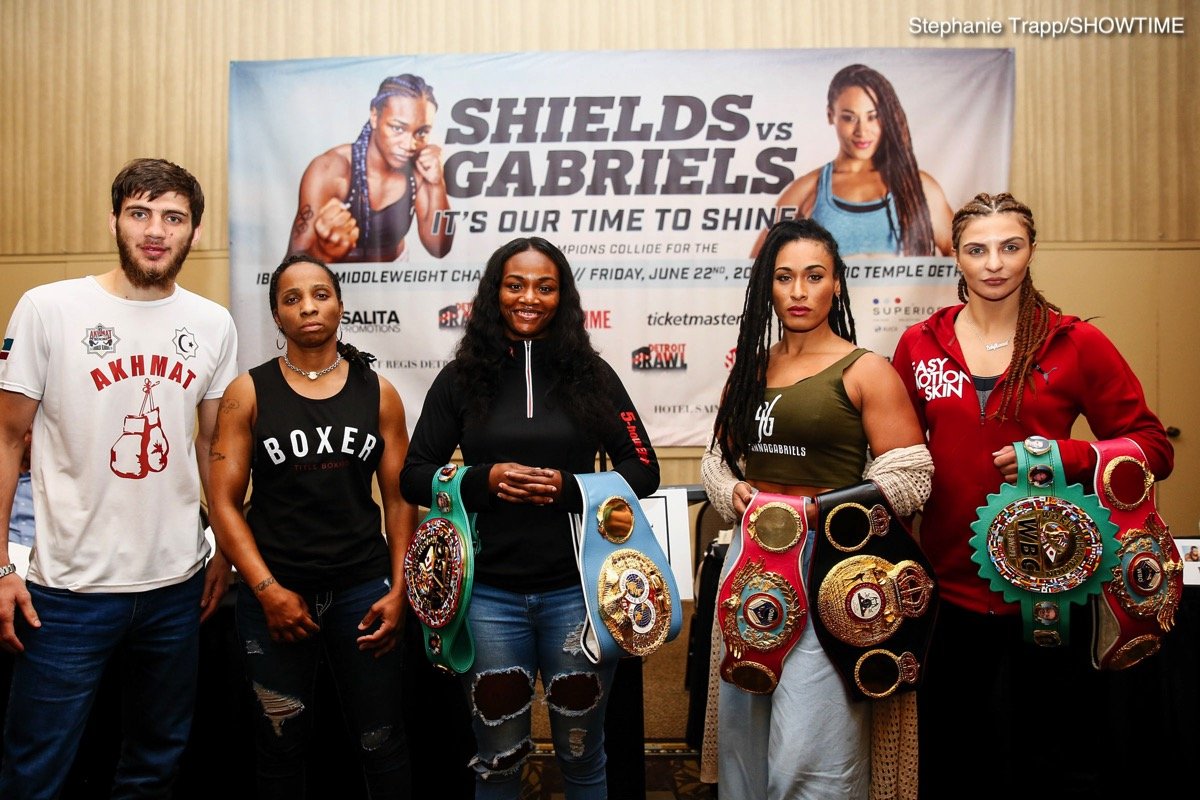 The SHOWTIME BOXING: SPECIAL EDITION telecast features the No. 1 fighter at 168 pounds facing the No. 1 fighter at 154 pounds as they both attempt to become champions for the first time in the middleweight division. In the telecast co-feature unified women’s middleweight champion Christina Hammer defends her WBC and WBO titles in her U.S. debut against former world champion Tori Nelson. Also, light heavyweight prospects Umar Salamov and Brian Howard will meet in a 10-round matchup that will open the tripleheader from Masonic Temple in Detroit.

Here is what the principals had to say on Wednesday at the St. Regis Hotel in Detroit. Howard was not able to attend because of weather-related travel issues.

“We have a women’s main event. We have another women’s fight for world titles as the co-main event and then, we have a male fight opening up the show. I’ve never seen anything like that before.

“After my second fight, I told Mark [Taffet] what my dreams were. My goal was to fight Christina Hammer my seventh fight to take all of her belts. That was the way that I saw it going but my professional career took off very fast and that’s why I’m the greatest female fighter of all time. I say that because where I’m from in Flint, Michigan, people have dreams all the time but we’re not given that opportunity. I was in a dark place from the age of five until I was 17.

“For someone to take away my accomplishments and say that I’m not the greatest of all time, you have to show me. When I’m in the gym training two times a day, I think about what I went through and what my family goes through and I push myself. When somebody says that they’re going to beat me, it angers me. I get mad and I punch the bag until it falls. When you tell me that I’m not the greatest woman of all time, I really hope Hanna has trained hard because it’s not going to be an easy task. I really hope that Christina Hammer has trained hard because in the future it’s not going to be an easy task either. To beat me, you’re going to have to kill me. I’m not going to go down.

“I’m the fastest woman to win a world title. I did it in my fourth fight. I was 21 years old and I was coming off winning two Olympic Gold Medals. I whipped this body into shape. In the Olympics, you fight four two-minute rounds. June 22, we’re fighting 10 two-minute rounds. I’ve been pro for a year and a half so you can’t tell me I haven’t worked hard to get to where I am. When I say that I am the greatest woman of all time, I’ve proved it. I have the belts. I have the gold medals. There’s more footage of me boxing out there than any other woman. Every fight, I improve. Just because somebody has been professional more than me, it’s not going to make it any easier for you. You have to come in there and you have to show me. I’m fighting the best and if anybody ever stands up to me, man or woman, I’ll never lose. I can’t wait until Friday night.”

“I think Claressa is a great fighter. I think she has accomplished a lot. I wish that I got the chance to go to the Olympics but when I started women’s boxing wasn’t an Olympic sport. I didn’t have that chance and I’m just happy that so many women are now able to dream about that and accomplish that.

“I only have one amateur fight and people laugh at me for that. I didn’t have the same opportunities coming up in Costa Rica. I didn’t have that privilege and it’s very difficult. I didn’t have the opportunity to fight anybody so I turned professional and here we are. My path has been difficult and unexpected. Many people thought I was too old by the time I got started. It’s been an amazing journey and I came prepared for this fight. When you are a true competitor and you like to push yourself to the fullest, then you like great competition. I am glad that Claressa and I will be facing each other on Friday. I hope everybody enjoys the fight.”

“I’m ready for this. I’m ready for you Tori. You want these two belts? You have to pass through me first. It’s time for me to shine and I’m ready.

“It was disappointing for me not to fight in January. I had some visa issues but now I have everything in order for me to make my debut. I’m so excited to finally step into the ring in the U.S.

“Right now, I’m only focused on my next fight and Tori is my target. Whatever Claressa does, I’m not focused on that. After the fight, I’m looking forward to fighting her but at the moment it’s only Hammer and Nelson.

“I feel that I’m in the best shape of my life right now. I prepared very well and I have my weight already. I ate very disciplined and clean. I spent a week in Ft. Lauderdale and now I’m in Detroit so I feel ready to go and looking forward to the fight.

“I think Shields is looking forward to fighting me and is not so focused on Gabriels like she should be. I am focused only on Nelson and that’s who I prepared to beat. After this fight, we can talk about Hanna or Shields.”

“I must say that I was very hurt to get my first loss but to have it against Claressa, I’m honored. She carries herself as a champion and in order to find out if you are the best, you have to fight the best. That’s what I did. I went up a weight class and I fought the best. She showed me she was.

“Styles make fights and it’s going to be interesting but we’re going to take this win home.”

“This is a tough, exciting fight for me but I’m ready for the top light heavyweights in the world and I’m going to prove that on Friday night. I know I’m a strong, heavy puncher and I’m going to show that and give my best.

‘I will bring a high-level and lots of energy. I’m going to show that I belong in the championship picture. It feels incredible and I’m honored to be fighting on SHOWTIME.”

“It’s a pleasure to work with Claressa. She beats most of the men that I train. She comes to fight. This Friday night, she’s going to showcase her talents once again. Since day one, she’s been a pleasure to work with. Whatever I’ve asked her to do, she tries. She’s perfecting her craft. This fight should be a wonderful event. She’s bringing boxing back in two ways. One, for the female fighters but also for the boxing community. She’s refreshing. When the bell rings, somebody’s getting hurt. Her whole intention is to be undisputed champion in multiple divisions, not just one. She’s definitely on the right path for that.”

“It’s been some road getting here. It’s been hard. Female boxing doesn’t get the attention or the money that they deserve. We have amazing warriors over here. During this two-month period, all I’ve heard is, ‘The greatest woman of all time.’ How can you call yourself the greatest woman of all time when you have five professional fights? That’s disrespectful to the fighters such as Christina Hammer and Hanna Gabriels. There are so many great champions in the past as well. I just think it’s disrespectful.

“Hanna Gabriels is a three-time world champion and a great human being. Everybody is going to have to pay attention to her after this fight and what’s coming next.”

“They say that lightning doesn’t strike twice in one spot but we were fortunate enough to get a second opportunity on SHOWTIME. There’s no shame in losing to probably the best female fighter there’s ever been. Mad respect for Claressa. We like our chances against Christina Hammer, who we have a lot of respect for. Styles make fights. In this one, it’s kind of like Ali vs. Frazier. You have the tall, long Christina with the great jab and you have Tori at her best fighting weight. It’s going to be a really good contrast of styles and a great fight to watch.”

“This reminds me of when I was a kid and championship boxing was in Detroit in full stride. We have exciting boxing with the top female boxers in the world here performing in Detroit. Female boxing is on the rise and it’s become more entertaining than men’s boxing in a lot of ways. I’ve always thought that Claressa Shields was the big star in boxing to bring women’s boxing back to the forefront.

“There’s been a lot of good boxing here in Detroit. We have brought over a lot of fighters from Russia, one of them being Umar Salamov. I’ve been very impressed with his performances in the short amount of time that he’s been training with me. He learns very fast. He has a lot of talent, good footwork, good punching power and he likes to have fun. He has a tough fight on Friday against Brian Howard, but if you want to build a champion you have to put him in tough fights at the right time.”

“SHOWTIME Sports continues to lead the boxing industry by delivering the largest slate of live events. This year alone, we featured 22 world title bouts and our ShoBox: The New Generation series continues to develop prospects, turning them into contenders. Most recently, we had our 76th fighter in Maurice Hooker win a title. We are very proud of this developmental series as it has helped the sport of boxing.

“SHOWTIME has a long history of women in combat sports. Our MMA platforms have seen the likes of Gina Carano, Cris Cyborg and Ronda Rousey and our boxing is headlined by Laila Ali, Christy Martin and most recently, Claressa Shields, Amanda Serrano and Katie Taylor. This will be SHOWTIME’s eighth telecast since 2016 presenting women’s boxing. Male or female, we are delivering the best fighters in their best fights and Friday will be no different.”

“We have a full card stacked from top to bottom on Friday night. There are a million ways to say no, but only one way to say yes, and Hanna Gabriels said yes. She’s on many pound-for-pound lists and is a superstar in her own right, especially in Costa Rica where she’s fought in front of 10, 15, 20,000 people. She’s a trend-setter and record breaker in women’s boxing in her home country.

“Claressa Shields has the ability to become a Joe Louis, Jackie Robinson, Pele, Michael Jordan – someone very special and someone who can take the sport to the next level and she has already done that by becoming the first women to fight in the main event on a premium sports channel.”

“I promise you that we’ll look back some day and June 22, 2018 will be the day that people will point to and they will say, that’s the day that the glass ceiling was broken.

“You don’t get champions with the talent and level of commitment these women have, inside and outside of the ring, that often. And we have them all in one night, in one card. It is the best night of women’s boxing to date.” 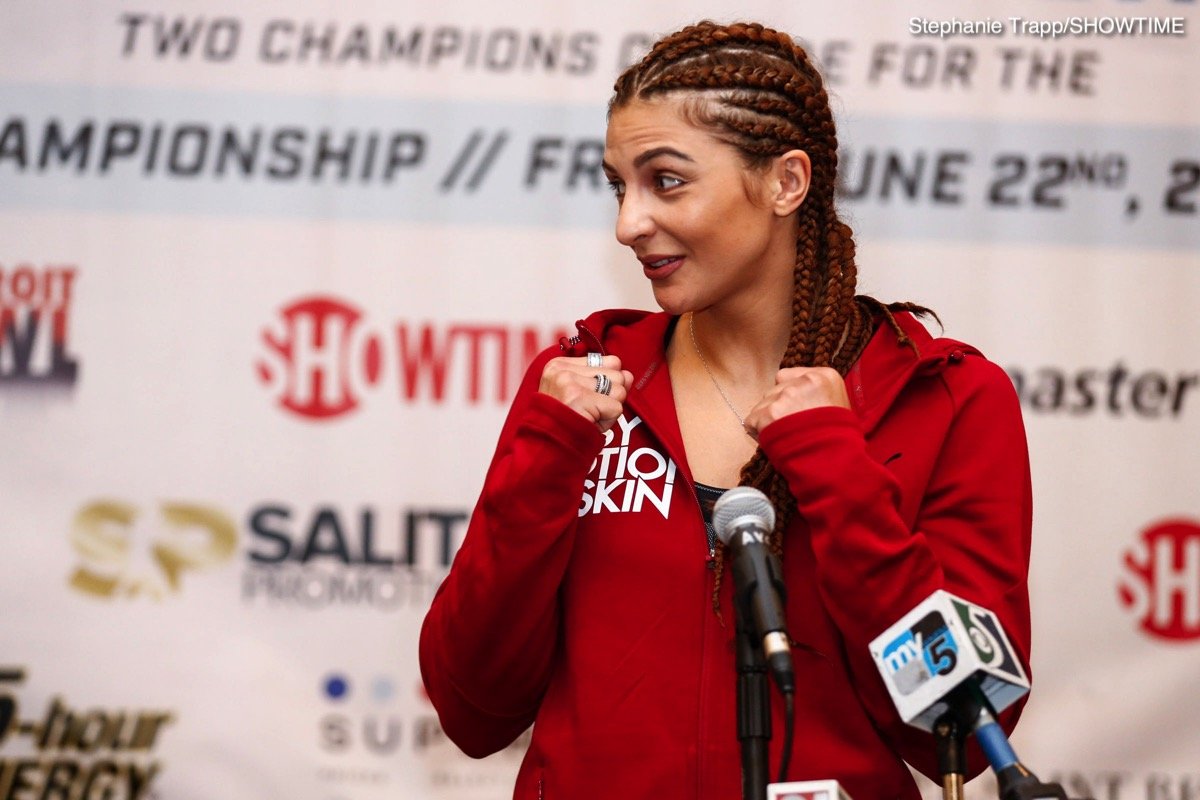 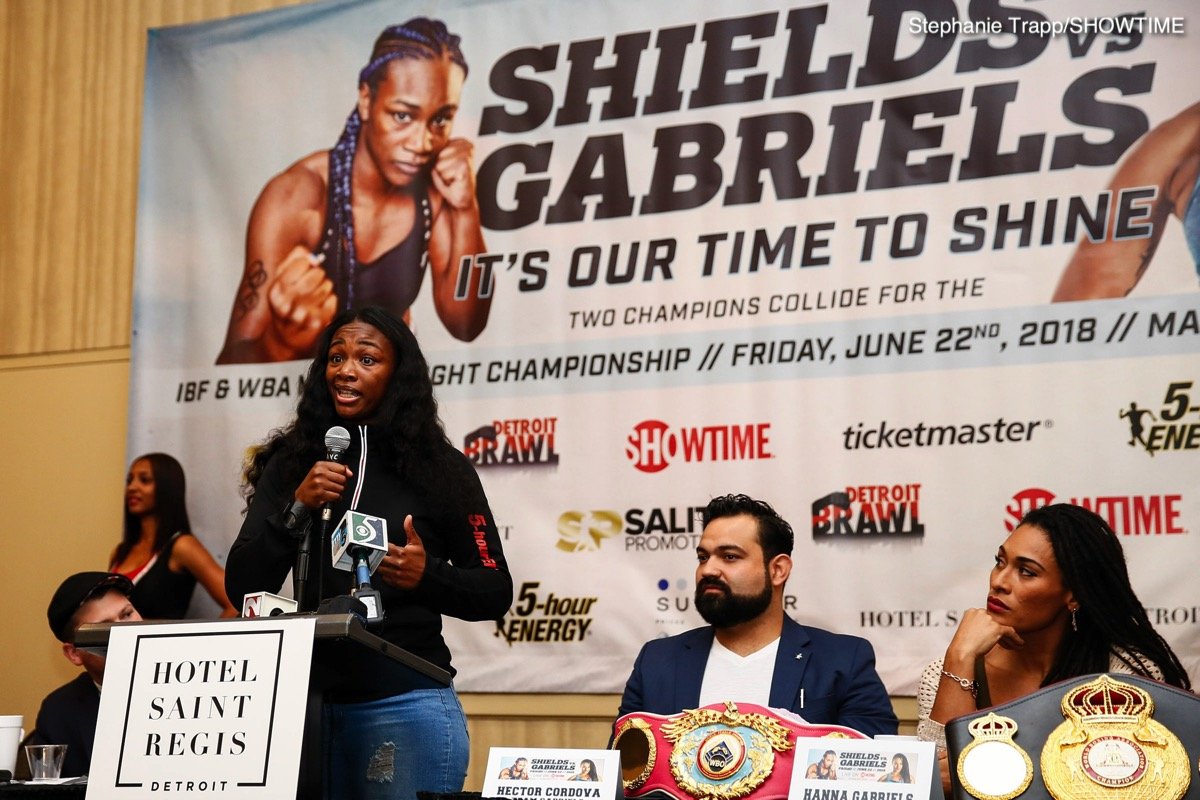 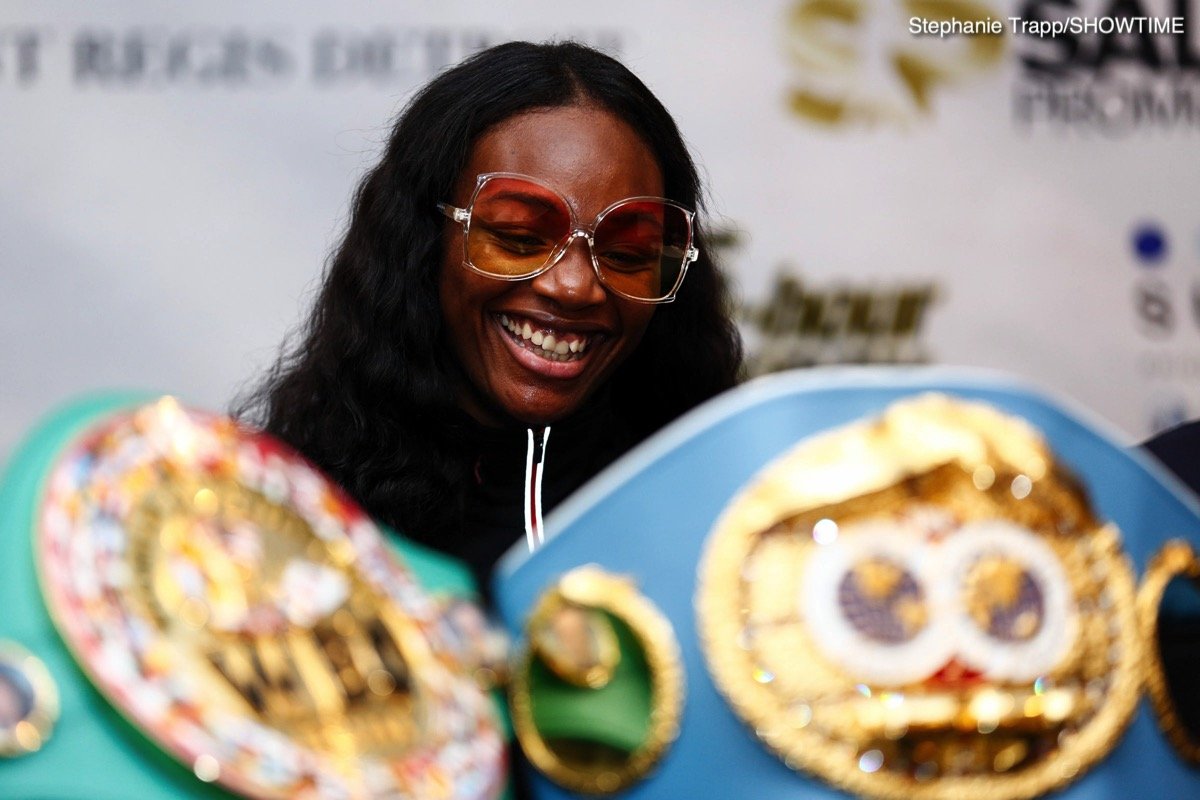 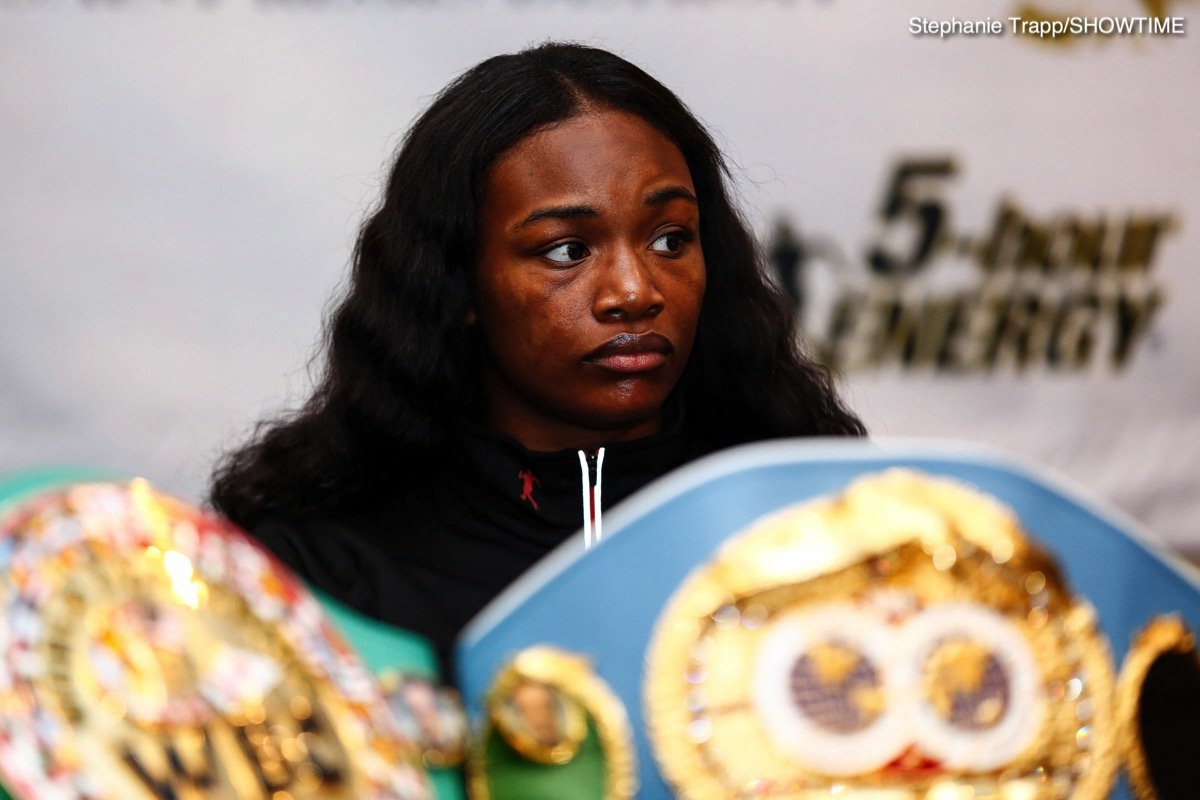 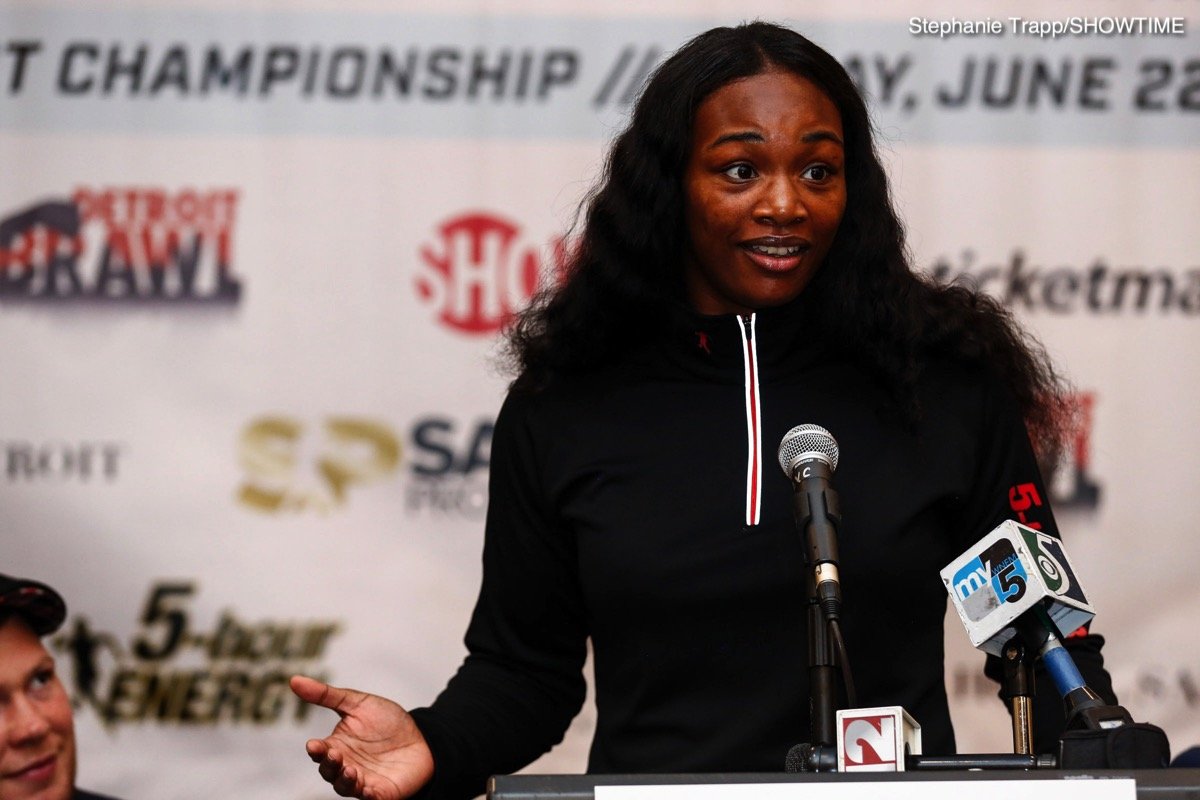 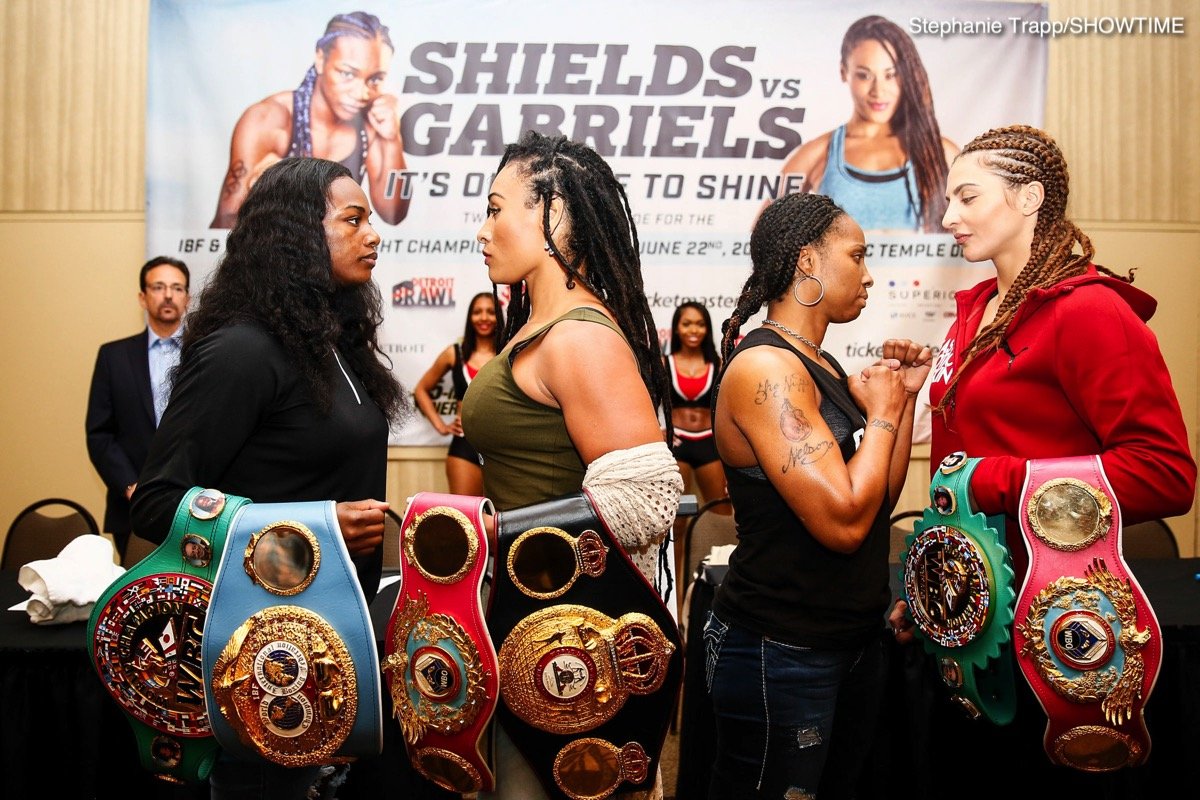 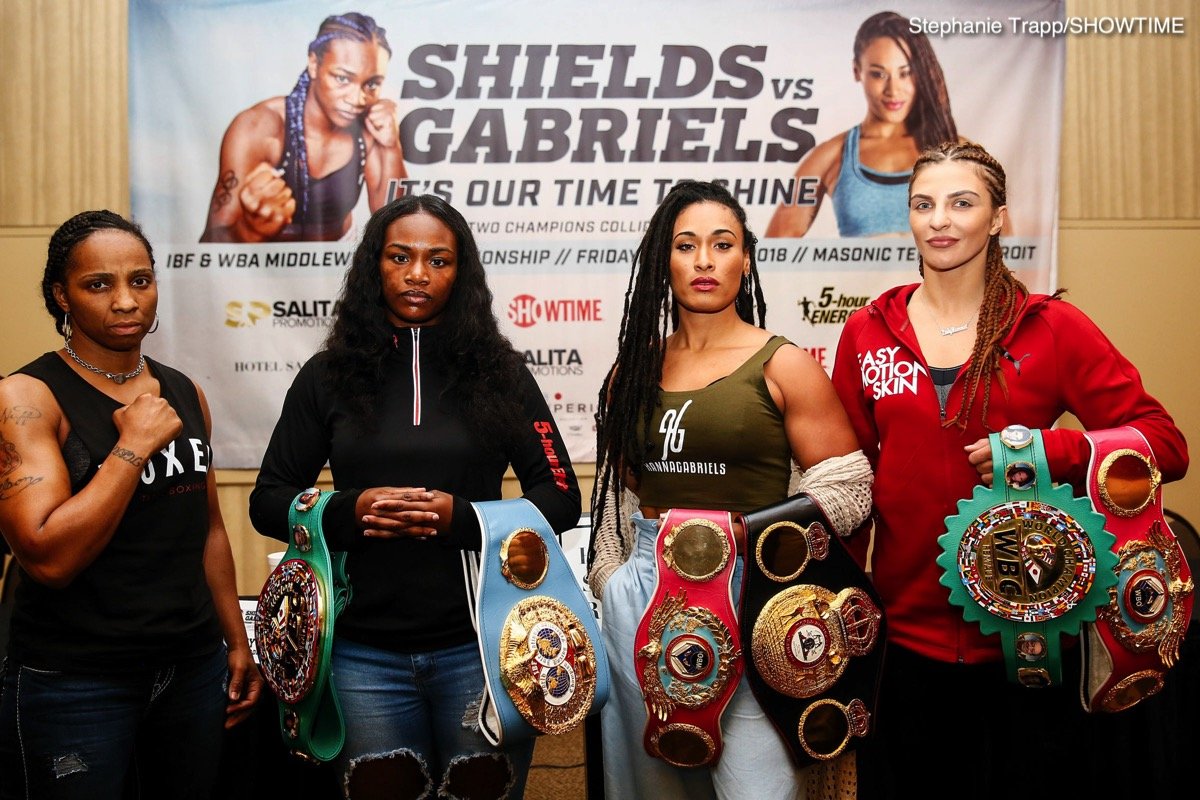 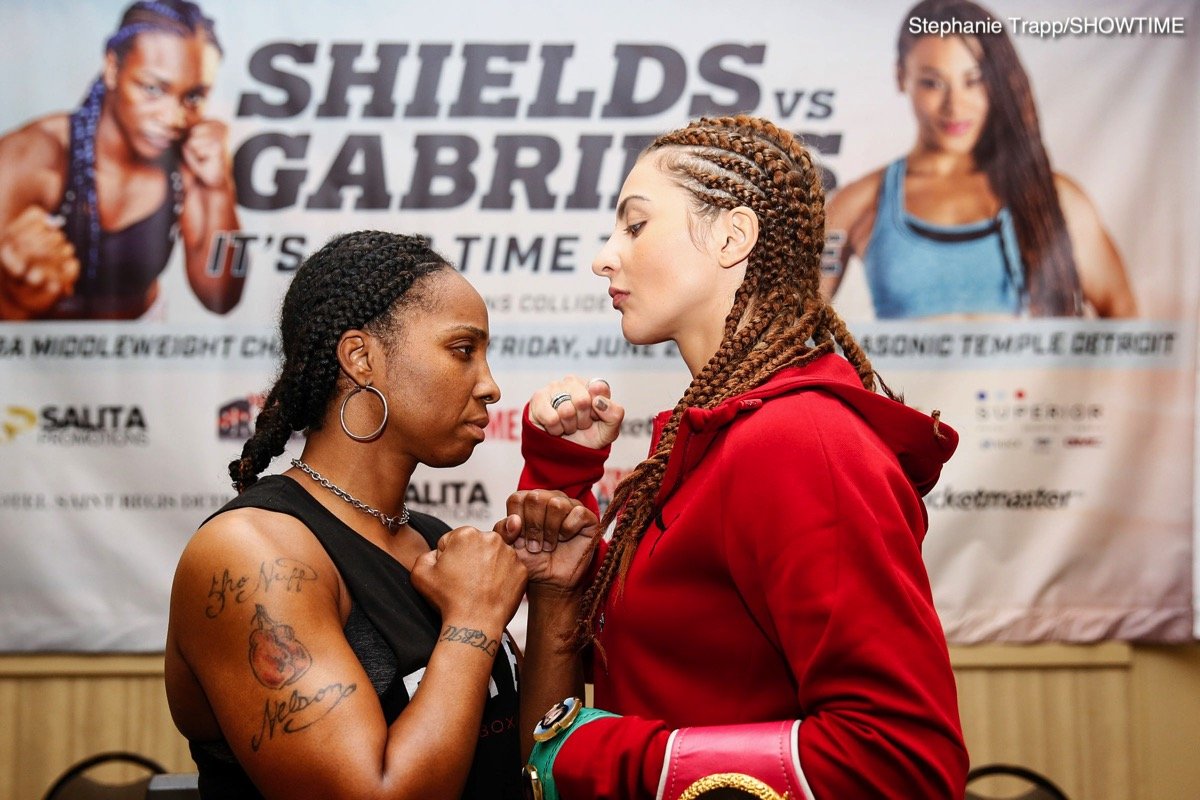 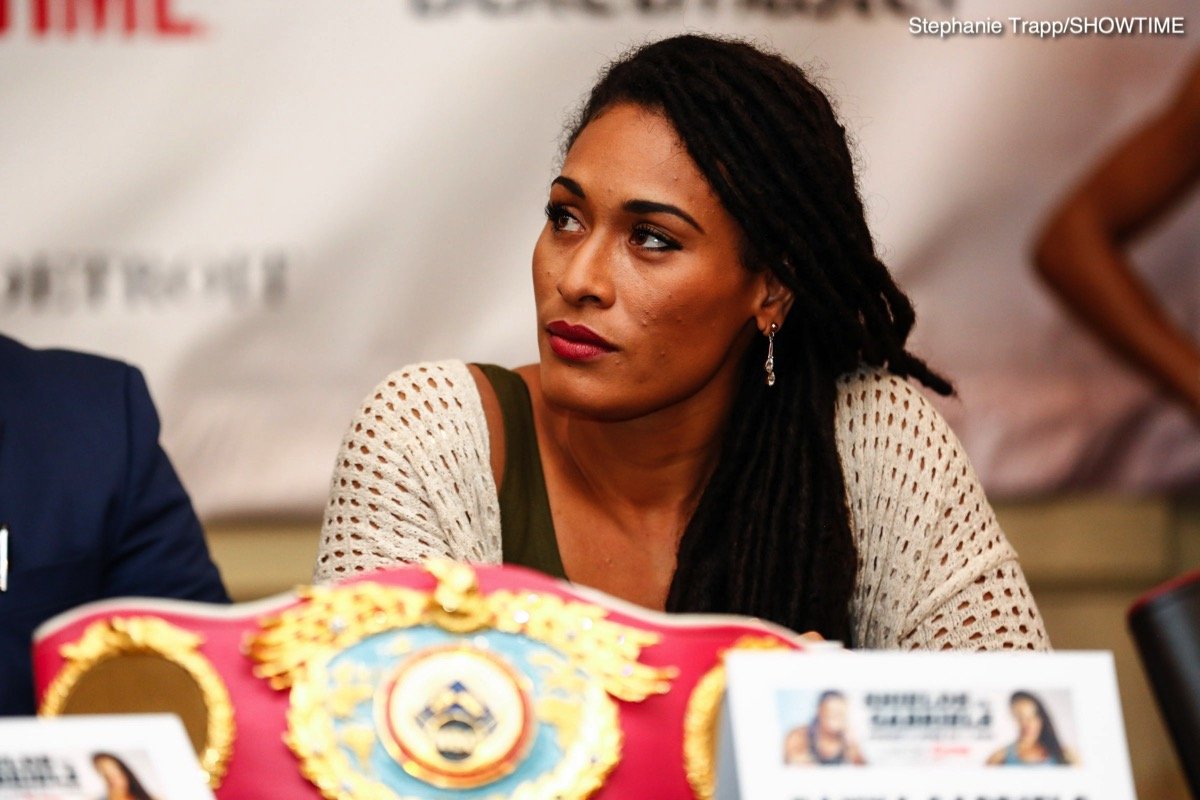 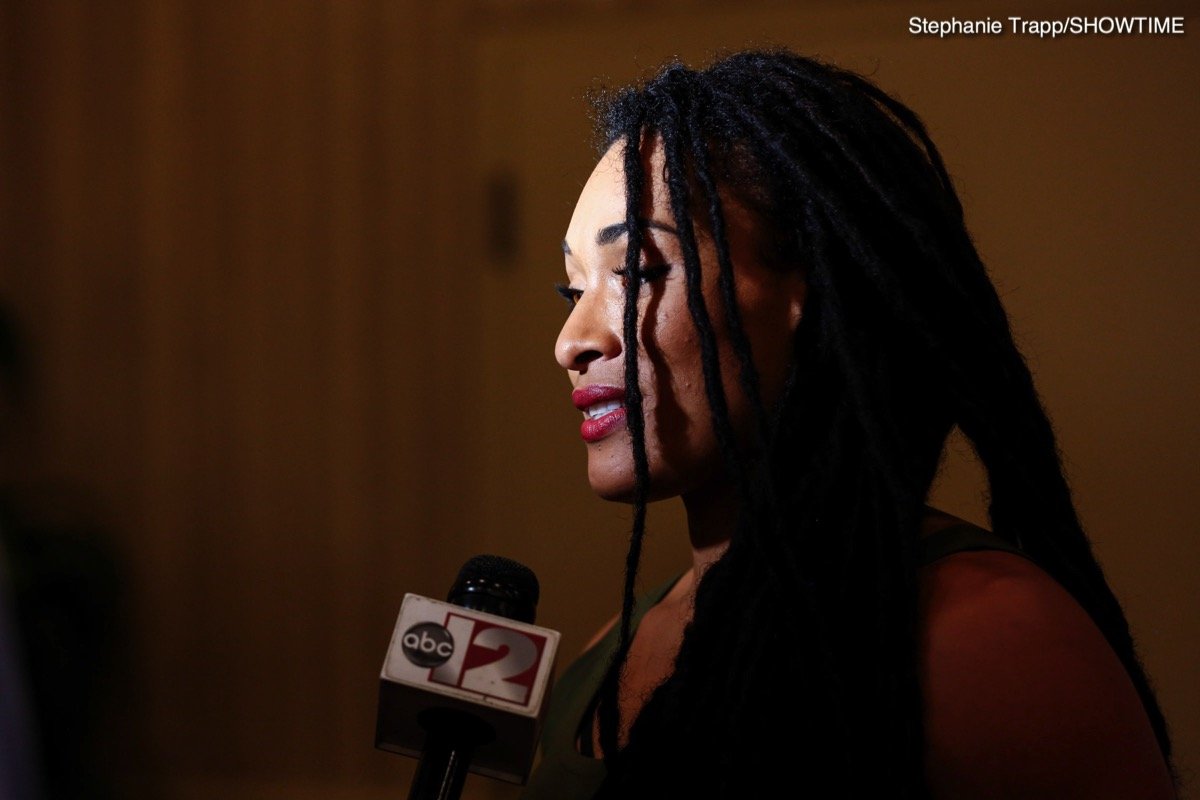 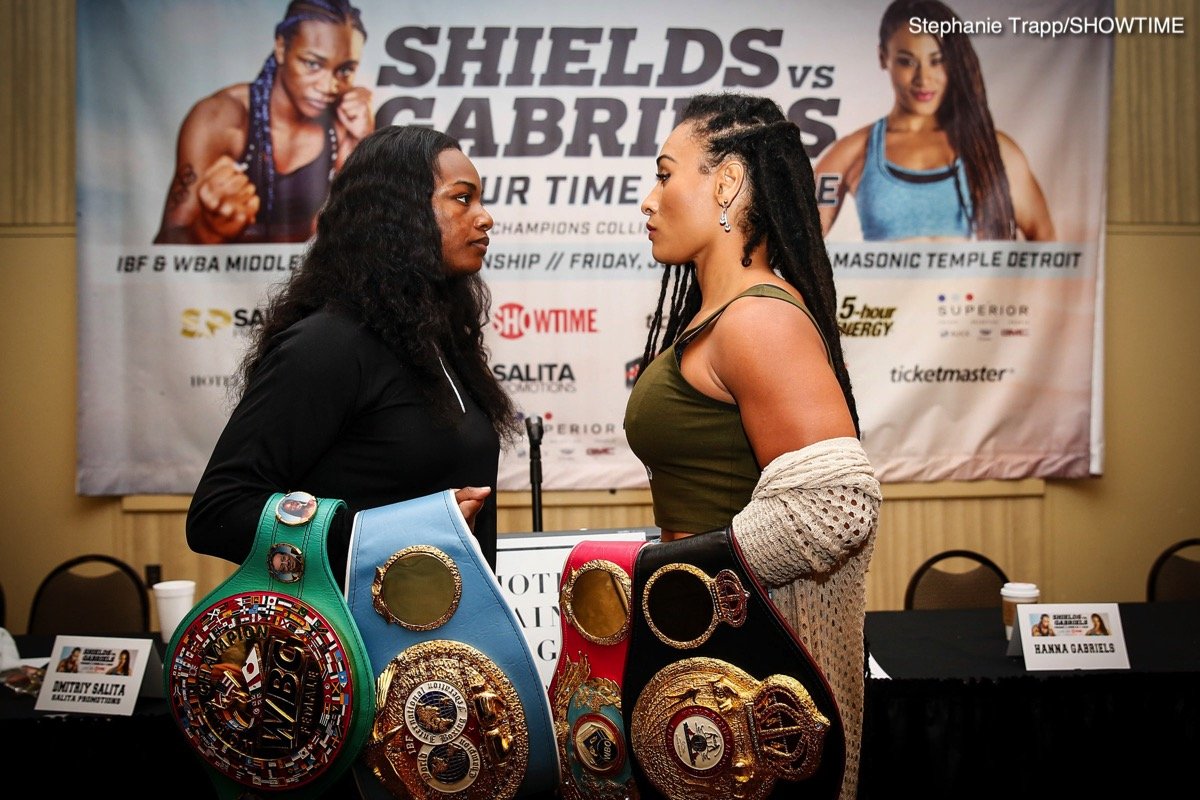 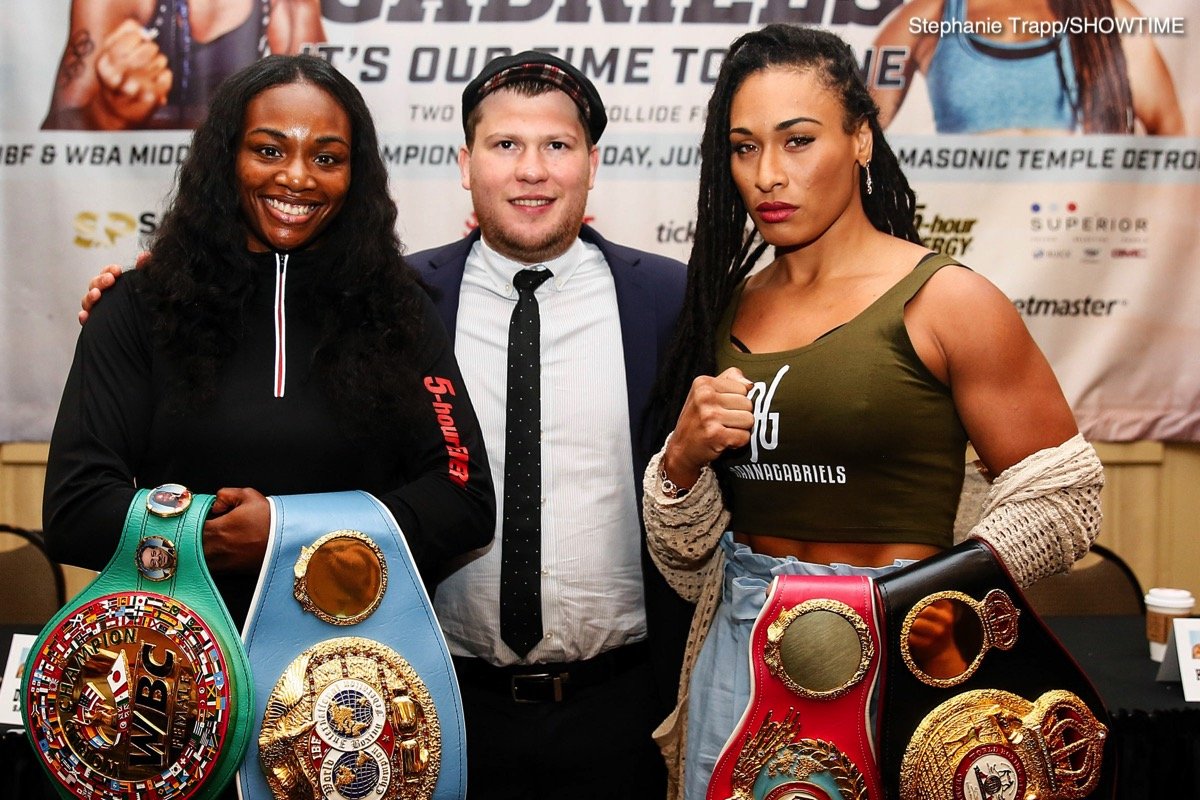