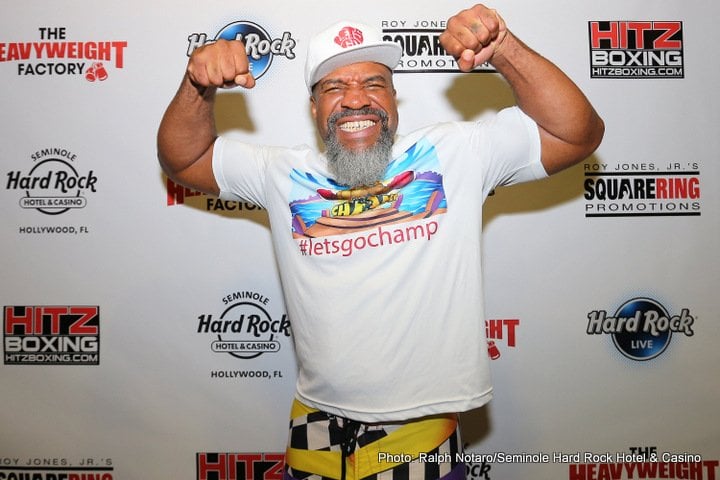 Former two-time heavyweight champ Shannon Briggs was unable to get into the official weigh-in for the Anthony Joshua-Alexander Povetkin fight on Friday, but “The Cannon” managed to “sneak in” to the fight itself last night. And Briggs, who spoke briefly with IFLTV, said that he will be fighting here in the UK in December. No opponent was mentioned and it remains to be seen if this actually happens, but as Briggs said last night, “I’m everywhere. They can’t stop me.”

Briggs, who was mightily impressed by Joshua’s stoppage win over Povetkin, said he would like to see AJ fight “Big Baby” Miller next, before tackling Deontay Wilder after that. But who could Briggs fight if he does box again, in the UK, in December? Still a big name, still popular (as evidenced by the fan attention Briggs received this whole past weekend) and still trying to do something before his career finally comes to and end, Briggs is as deserving as the next guy when it comes to earning a living.

There could be some good, fun match-ups involving Briggs, too. If Dereck Chisora cannot get the rematch he so badly wants with Dillian Whyte (and Eddie Hearn has said that if Whyte gets the April 13 shot at AJ, in a rematch Whyte so badly wants, he will not risk this by tackling Chisora again on December 22; that he will instead have a “tick-over in America” so as to keep sharp), maybe he could fight Briggs. At The O2 with a solid under-card, this one would possibly sell.

There has also been talk of Briggs fighting British heavyweight David Allen, and maybe this will be the fight Briggs gets in December. Briggs will never become world champion again, or even get a title shot, but he can still win himself a couple of decent pay days. Briggs should get the chance to do so, too.

He’s still here, he’s still making noise, and he’s still fun to be around. Let’s see if Briggs can add a few additional KO’s to the 53 he has already scored.