Sergio Mora believes that Billy Joe Saunders won’t be able to come back from his devastating right-eye injury from his loss to Canelo Alvarez on May 8th.

Mora says the extent of quadrapod fracture that former two-division world champion Saunders (30-1, 14 KOs) suffered in his eighth-round stoppage defeat against WBA/WBC super middleweight champion Canelo (56-1-2, 38 KOs) would put him at risk of losing his eyesight if he gets hit.

Further, Mora says Saunders will have pins in the right orbital area of his skull now from the surgery, and he questions how he would be able to take getting hit in that area in future fights.

Even if Saunders, 31, did come back, he would have no opportunities for him to win an easy world title like before. When Saunders picked up the vacant WBO super middleweight title in May 2019, he beat Shefat Isufi.

There won’t likely be another title that Saunders can pick up quite so easily as he did with the WBO strap.

If Canelo chooses to vacate any of his belts if he’s successful in becoming the undisputed champion at super middleweight in September, it’s most likely that the contenders will go after that belt will be guys like David Benavidez and Carlos Gongora.

Those are guys that could do damage to Saunders. Even before Saunders suffered the eye injury, he would be at the mercy of those contender’s big punches if he’d had the bad luck of fighting them.

You hate to say it, but Saunders has been little more than a belt-holder/weakest link since he picked up his WBO super middleweight title in 2019.

“Chances are he won’t be a world champion again,” Mora said to’JABS’ at DAZN about Billy Joe Saunders.

“The chances are slim. And also those injuries, if those reported of the pins in his skull, how do you take a punch like that? A fighter only has so many fights back in him,” said Mora.

The problem is, Saunders will likely lose to all of those fighters, and who knows what will happen with his eye. If Saunders gets beaten soundly, his chances for big paydays will drop off to nothing if he’s incapable of beating quality opposition.

“It’s dangerous; he could lose his sight,” said Mora about Saunders. “I don’t think he can come back from that. He cashed out, he went to the biggest stage, and he had a career-ending injury against the best in the world.”

You can argue that Saunders’ entire career has been set up to where he was matched in a way for him to cash out eventually. He never fought any of the talented contenders or champions that would beat him.

If Saunders had fought dangerous opposition years ago, he would have never gotten the opportunity to cash out against Canelo. You can argue that Saunders has been this era’s version of Sven Ottke.

The German super middleweight held world titles at 168 from 1998 to 2004 and basically fought no one risky that could potentially beat him.

Ottke retired just as the 168-lb division suddenly came alive with talent in 2004. Saunders is similar in that he fought no one until his cash-out fight with Canelo.

“The whole side of his face was fragmented, and with that comes the ego and confidence,” said Mora in talking Saunder’s eye.

“Once he gets hit on that side of the face, I don’t see it happening, man,” said Mora. 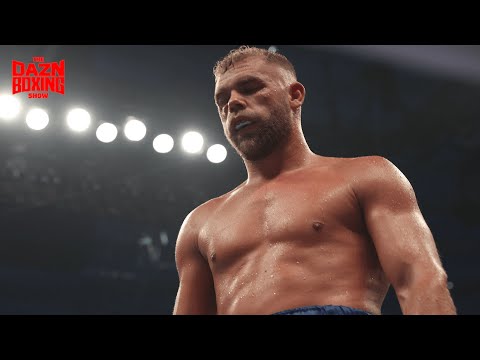