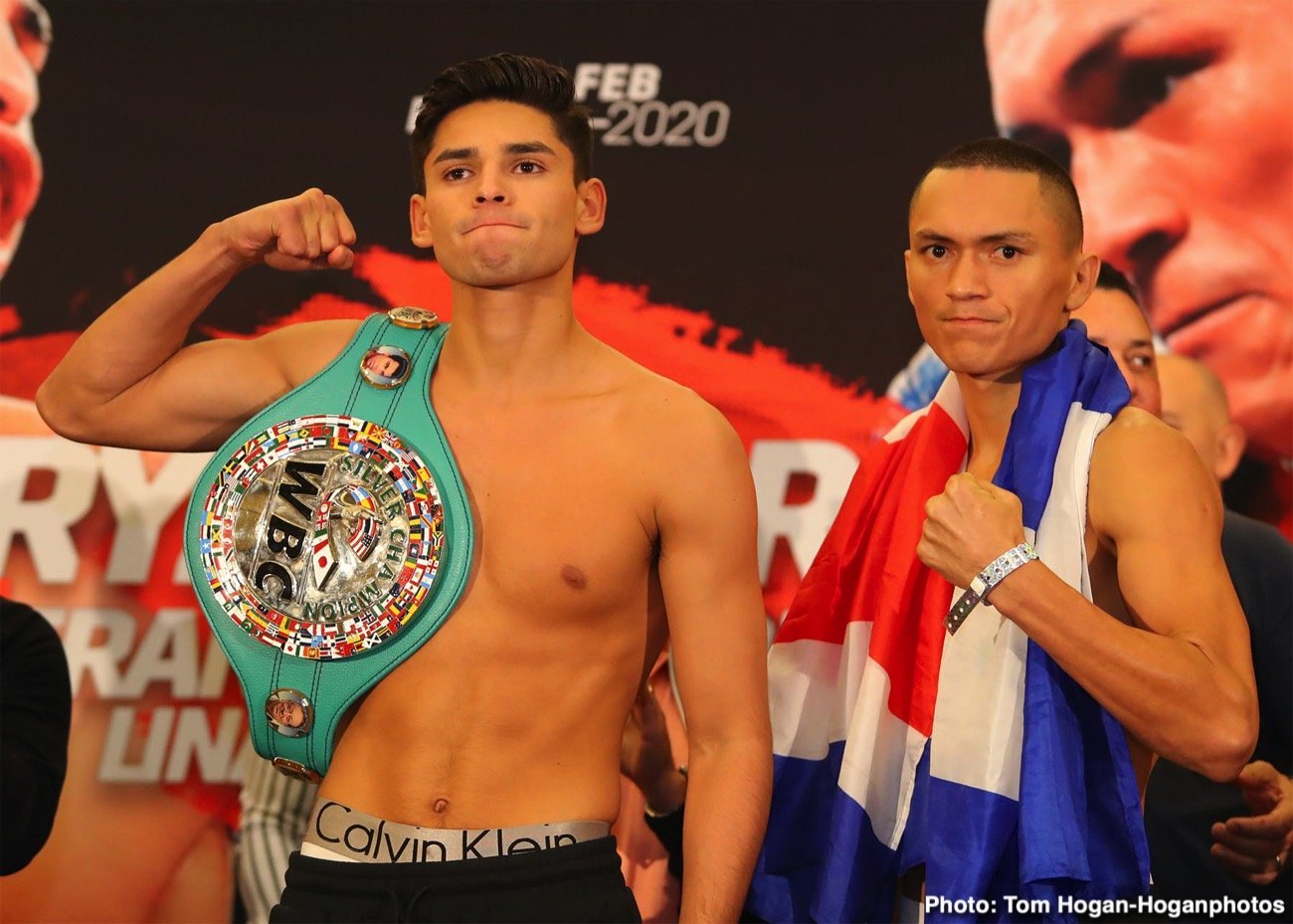 With 4,8 million followers on Instagram the 21-year old unbeaten boxer Ryan Garcia can make plenty of money without even throwing a punch.  But if he wants to climb to great heights in the boxing world this Friday night is a great place to start the ascend to the top or as close as possible. His opponent is a sturdy veteran fighter named Francisco Fonseca and with only two losses it would seem to be a perfect opportunity for Ryan to take an important next step in his career. A possible summer fight could involve Jorge Linares if he’s able to get by a Carlos Morales on the undercard. The card is promoted by Golden Boy Promotions and will be streamed live on DAZN.

Valentine’s Day seems to be a good fit promotional wise for Ryan Garcia given the fact he has millions of female admirers on social media. It’s not like he’s going to demand enough attention at the gate to take over fellow stable mate Canelo Alvarez’s May and September Mexican themed weekends so it would be thinking out the box if Garcia could make this a yearly tradition. Regardless of the date night evening which would be awesome for a guy if his gal did actually want to attend a fight, it’s time for Ryan to show his worth.

If you pay attention to Garcia’s twitter and interviews, he’s made it clear he wants a title shot by year’s end. In fact Fonseca, Jorge Linares, and Gervonta Davis are the order of foes he wants to line up. You have to at least respect this kid’s energy & potential to reach the mainstream someday. For now he must be 100% fully focused on Francisco Fonseca. Ryan does have some skills and power at 135 which should continue to improve as he gets his man strength over the next few years.

Just looking at one highlight video of Garcia it’s clears as day he’s got ultra quick hands and for a lightweight, impressive reach of 70 inches standing 5’10. Now that this boxing podcaster has hit you over the head with him looking the part of a future superstar, none of that is possible if the kid can’t fight on the top level of the sport of boxing.

One of the many positives for Garcia is him switching trainers to the respectable Eddie Reynoso, the same man that has developed the most popular fighter in the sport Canelo Alvarez. Over the last chunk of years Canelo has shown a wide range of elements to his fighting game. A quality trainer is important of course but it won’t turn a fighter from shit to sugar.

In 2019 the powers that be at GBP made sure they moved Garcia laterally instead of stepping him due to back to back problematic outing in 2018. Jayson Valez and Carlos Morales pushed Ryan to the brink to the point that some folks on boxing twitter thought he may have deserved to lose to Morales. The Valez fight was a good grooming opponent because it was the first guy to make it to the final bell. The third fight of that year presented some real problems in the late rounds with Morales. Morales cracked Garcia in the 7th round and it looked as if Ryan’s legs were gone. In the eighth Morales continued to apply pressure and it was clear to see Ryan was hurt and gassed but to his credit he did survive the closing rounds walking away with a razor-close majority-decision.

In walks a good tester for Garcia in Fonseca a game guy who will come to fight and won’t back down. Fonseca’s two losses are respectable coming from Gervonta Davis and Tevin Farmer. Fonseca will bring some heat for Garcia to attempt to defuse with a crisp jab and flush lefts hooks and hard right hands. Fonseca keeps a fairly tight defense but it’s a bit of a high-guard so he leaves his body open for punishment. This boxing degenerate noticed he is responsible to an extent on offense but can’t be too hesitant when he’s up close in punching range. Uppers cuts and lefts hooks should be there not long after the bell rings for Garcia and a jab to the pit of the stomach will be just what the doctor order for victory.

Fonseca will need to punch when Garcia punches which he has shown to do well in spots. If he can’t time Garcia he has to make sure to keep him honest by making him pay with shots in return when Garcia is pulling out. A take that with you approach after Garcia lands his punches. Fonseca must close the gap so he’s not on the end of Garcia’s power punches and make it a rough fight on the inside is his only path to victory beyond a home run hitter. Leaning on Garcia and roughing him up in a suffocating style is necessary for Fonseca.

At the end of the day if ‘Kingry’ is who some folks think he is this should be a clean win on the scorecards or late TKO stoppage. I do think there is a good chance Garcia could face some form of adversity but not enough to knock him off the lightweight ladder.

My Official Prediction is Ryan Garcia by Unanimous Decision.

Side note: Caleb Plant returns on FOX in his hometown of Nashville, Tennessee versus mandatory challenger Vincent Feigenbutz of Germany. Local fighter and 1-loss prospect Austin Dulay vs Diego Magdaleno is the opener. But the most equally matched bout will be the co-feature between Abel Ramos and Bryant Perrella in a crossroads welterweight scrap.