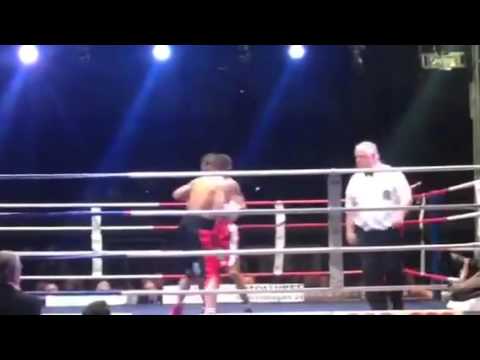 Ryan Farrag, 14-1 (3KO’s), made good on his long standing promise that the better the opponent the better Farrag you will see, stopping seasoned multiple World title challenger Stephane Jamoye in 9 rounds, 28-7 (16KO’s), in Belgium to claim the EBU (European) Bantamweight title.

In doing so, he confirmed an unwavering belief within his inner circle that Farrag has everything it takes to move seamlessly through the levels and achieve something special within the 118lbs division.

Out of the ring for over 10 months and relieved of the UK television coverage that should accompany such an occasion Farrag was exceptional.

The 27-year old broke down his more experienced opponent in every department, before sending him to the canvas for the final time, with a perfectly timed right hand that forced the referee to wave the contest off.

It was the comfort shown at the higher level that was most telling as Farrag claimed the prestigious title formerly held by sparring partner Zhanat Zhakiyanov, Jamie McDonnell, Lee Haskins and Prince Naseem Hamed. A composure, which in the aftermath the ecstatic scouser claimed, surprised even himself.

“I was a bit shocked at how much I was enjoying being in there.” Said Farrag. “As I’ve said before, my style is better suited to a higher level of opponent and I proved it on Friday. Everything I do is so much more effective against fighters who come to win.

“I knew my brain would win me the fight. The better fighters go for things that survivors won’t, rather than cover up, they’ll try and counter my work. I used that to my advantage and set Jamoye up and punished him.” Explained Farrag.

It’s hard to argue with a fighter whose 3 knockouts came in his most challenging fights over a traditional distance, his only defeat a 3 round decision coming in the Prizefighter tournament to now interim IBF World Bantamweight champion Lee Haskins as a 5 fight novice.

Like Haskins and the sensational WBA World Bantamweight champion Jamie McDonnell, Farrag looks ready to lift the shadow that is seemingly cast over the British 118lbs division.

“I feel I hadn’t had the chance to show what I was capable of at the higher level.” Said Farrag. “But, what I did to Jamoye showed what I’m about and hopefully people want to see more.”

Farrag will travel to Dublin to meet with his new management – MGM Marbella – this weekend to discuss the next step. In a division that is buzzing with two British World champions a vacant British title and a number of growing rivalries there to be exploited, that step should be an exciting one.