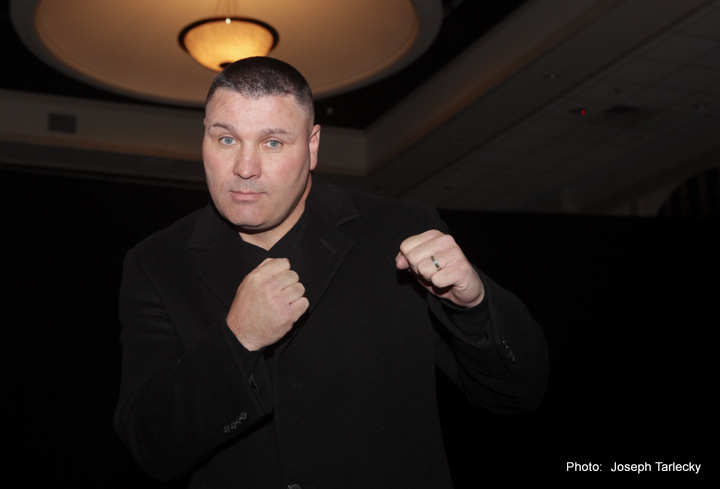 As their showdown nears to determine the WBF cruiserweight title, Bobby Gunn boldly offered Roy Jones Jr. via twitter the opportunity to make their fight a winner take all bout.

Gunn wrote yesterday, “Happy Birthday Roy. Fair play to you. God bless you, look forward to seeing you on February 17. Do you fancy winner take all?”

Former IBA title holder Gunn was contacted shortly after the buzz over the tweet spread throughout the boxing world.

“This was not a publicity move, I am going into this fight with one purpose, and that is to put Roy on his back,” said Gunn. “Roy has said his intentions are the same, so if he has the confidence to back it up, let’s put our total purse on the line to the victor.”

In weeks leading up to the fight Gunn has expressed that this has been one of the best training camps of his career, and February 17 he is adamant about adding the WBF world cruiserweight belt to his hardware collection.

Last week undefeated world heavyweight champion Tyson Fury put up a video that went viral in which he predicts his good friend Bobby Gunn not only is victorious over Jones Jr. but knocks him out.

The buzz for this matchup has been growing for nearly a decade, and despite it falling through on two occasions, both pugilists are preparing for an epic showdown that will leave boxing fans around the world on the edge of their seat.

“Bobby is a heavy hitter who is going to come at me and look for the knockout,” said Jones. “I am training for this fight like I did for my first championship fight. He’s a former world champion too and bare knuckle boxing champion so he knows how to win, so I know I have to train and do what I’ve done in the past to get the W.”

Gunn vs. Jones Jr. features an action packed undercard leading up to two former world champions throwing hands to determine who the better man is.

The event is being held February 17 at the Chase Center in Wilmington, Delaware and will be televised. For tickets visit www.firststatefights.com.

In a recent video sent to his good friend Bobby Gunn, undefeated world heavyweight champion Tyson Fury shared that not only will he be sitting ringside as Gunn wages war against Roy Jones Jr. for the WBF Cruiserweight world title, but he confidently predicted that Gunn knocks Roy out to capture the title.

“I can’t wait til February 17 to watch my pal Bobby Gunn knock out Roy Jones Jr.,” said Fury. “Roy used to be the best pound for pound fighter in the world. It’s going to be an honor to come over and watch my pal Bobby share the ring with a living legend. February 17 is yours Bobby, and I’ll be there to support you.”

Fury shocked the boxing world in 2015 and made his presence known in the heavyweight division when he defeated Wladimir Klitschko, handing the former champion his first loss since 2004. close friend of former IBA world title holder Bobby Gunn, Fury is adamant that Roy’s time is up and he will feel the canvas February 17.

“I know I have a war ahead of me,” said Gunn. “Roy is coming to win, and he is going to come hard. I’ve had one of the best training camps of my career, thanks to Ossie Duran, Dominic Scibetta, Billy Briscoe and more. I’m surrounded by world class trainers and sparring partners, and I’m blessed to have such a strong team in my corner.”

Bobby Gunn and Roy Jones Jr. will meet February 17 at the Chase Center in Wilmington, Delaware, and the fight will be televised throughout the world.

Gary Stretch is no stranger to the fight game. He is the former undefeated British & WBC light Middleweight Champion and World Middleweight Title challenger.

Since retiring from the boxing world Stretch has made a successful transition into the film industry, working with some of Hollywood’s A list film makers such as Sean Penn, Oliver Stone, Mickey Rourke, Anthony Hopkins and Angelina Jolie to name a few.

However his attention of late has returned to the squared circle to support his longtime friend, bare knuckle legend Bobby Gunn.

Gunn will take on all-time great Roy Jones Jnr on Feb 17th in a match labelled SKILL vs WILL.

Stretch who is currently directing his first feature film “THROUGH MY FATHER”S EYES” the Ronda Rousey story will stop production to help and support Gunn on his mammoth task.

Stretch said recently, “I’m really excited about this fight, I know it’s a challenge Bobby has wanted for a long time.”

What I love about Bobby is his heart, will and fearless approach to take on the greatest conquests. I personally am a huge Roy Jones fan however on this one my heart and support will be for my great friend Bobby Gunn.”

Stretch continued to say, “I’ve heard a lot of people writing Bobby off, giving him no chance at all to win this fight, however we may surprise a few people. Bobby’s boxing skills are far underrated and i assure you his punching power will take out an elephant.”

Stretch will be flying in to join Bobby’s camp for some technical advice and will be there to walk his gypsy brother out to the main event on the 17th.