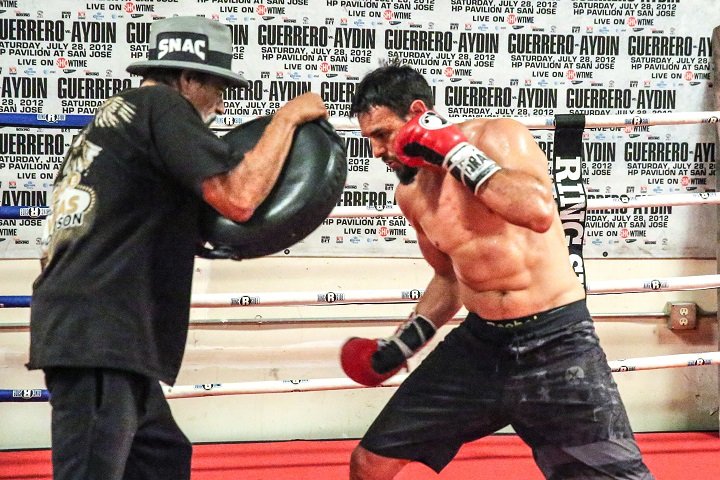 Tickets for the live event, which is promoted by DiBella Entertainment, start at $50 (not including applicable fees) and are on sale now. Tickets can be purchased online by visiting www.ticketmaster.com, www.nycblive.com, or by calling 1-800-745-3000. Tickets are also available at the Ticketmaster Box Office at NYCB LIVE. Group discounts are available by calling 516-231-4848.

See below for what Guerrero had to say about training camp, his July 15 showdown and more:

On his recent training camp:
“I feel great going into this fight. Me and my dad have been working really hard on all aspects of my game. I hired a new CrossFit coach, Greg Amundson, and he’s gotten me in great shape. Everyone will see an improvement in my all-around game. With my back against the wall going into this fight, I did everything possible in camp to be ready for Figueroa.”

On facing another undefeated fighter in Omar Figueroa:
“I’m always looking to battle the best possible fighters out there and Omar Figueroa is no different. He’s undefeated and looking to take his career to the next level but I have other plans. Figueroa has a come forward style that I’ll be prepared for. Stylistically, we both like to go for it so fans should expect to see a lot of hard shots being thrown in this fight. It’s going to be a war.”

On fighting in front of a national TV audience on FOX & FOX Deportes:
“Fighting on FOX and FOX Deportes again is going to be incredible and I can’t wait to let my hands go and give the fans the entertainment they deserve. This fight is going to be one those fights where everyone will be on the edge of their seat. The fans deserve to see non-stop action from the opening bell, and this is going to be that type of battle. Everyone tuning in will witness a great action-packed fight.”

On traveling to New York to fight in front of the east coast fans:
“This will be my second time fighting on the east coast. The fans out there love boxing so I’m expecting a rowdy crowd. I love that we are fighting on neutral territory. I just want to put on a great show and come out victorious with my hands raised.”