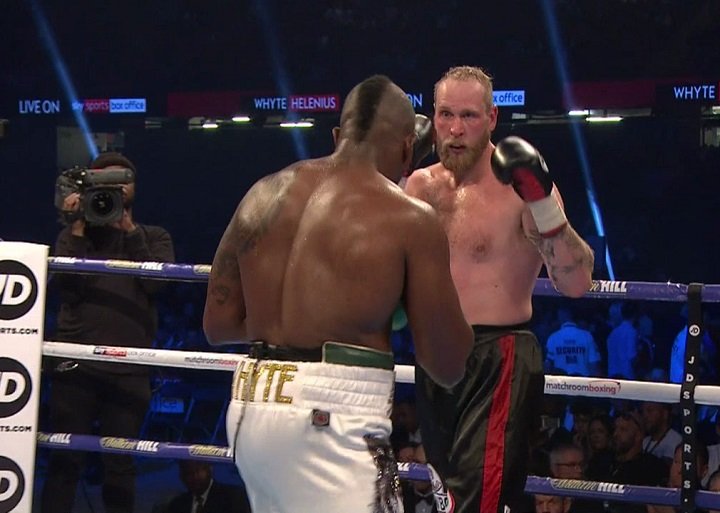 Dillian “The Body Snatcher” Whyte (22-1, 16 KOs) labored to a 12 round unanimous decision over Robert Helenius (25-2, 16 KOs) to win the vacant WBC Silver heavyweight title on Saturday night at the Principality Stadium in Cardiff, Wales.

This was supposed to be a showcase fight for the 29-year-old Whyte. Instead, it turned out to be showcase of how technically flawed Whyte still is at this point in his career. Helenius, 33, highlighted the fact that Whyte cannot cut off the ring against an opponent that uses movement. Whyte also showed that he was unable to put his punches together in a sustained combination form.

Helenius was there to be knocked out, but not by Whyte. He didn’t have the ability. After the fight, Whyte criticized Helenius by saying that he’s “no Viking” due to him using feet and his jab to box.

Whyte wanted Helenius to stand and slug with him. Whyte found out the hard way that not everyone is going to make it easy for him by standing with their feet immobilized so that he can land his ponderous punches.

The fight was very boring, and not just because of Helenius. Whyte made it boring as well with his one-paced fighting style, and his inability to throw effective punches. Helenius would have very likely been poleaxed by WBC heavyweight champion Deontay Wilder if it had been him fighting him.

Helenius had his moments in the fight. He hurt Whyte in round 2 after catching him with a solid right hand when he was coming forward. Luckily for Whyte, it came at the end of the 2nd round rather than at the start. Helenius might have finished Whyte off if he’d nailed him earlier in the round.

Now that Whyte has beaten Helenius, Whyte feels that he’ll be fighting Wilder next. Whyte will probably be pushed up in the World Boxing Council ratings to No.1.

“I should be the No 1 now, so that was the main thing about tonight,” said Whyte to skysports.com. “I hope Wilder gets through Stiverne, but you never know with him. He is a big, strong guy, he’s 38-0 and it’s not easy to get there, it’s still hard. But he is the one I want.”

Whyte looks like he’s not ready for Wilder. It would be better for Whyte to take a few more learning fights before he tangles with Wilder, because he looks like a bigger version of Dereck Chisora right now. Wilder will handle Whyte without any problems from the way I see it. A good opponent for Whyte would be Chisora or Luis Ortiz.