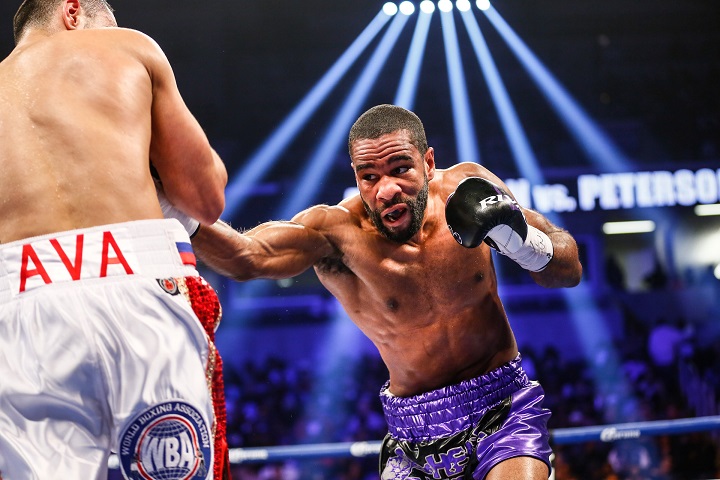 Lamont Peterson (35-3-1, 18 KOs) emerged victorious on Saturday night in handing WBA ‘regular’ welterweight champion David Avanesyan (22-2-1, 11 KOs) a clear 12 round unanimous decision at the Cintas Center, Cincinnati, Ohio. It was a good performance from Peterson, who came into the fight having been out of the ring since 2015.

Peterson didn’t look rust at all in winning the fight by the scores 115-113, 116-112, 116-112. Boxing 247 scored the fight 116-112. There were a lot of close rounds early on in the first half of the fight, but Peterson pulled away in the last half of the contest to get the win.
The two fighters traded on the inside through most of the fight, but Peterson showed that he was the more skilled guy in close. Avanesyan, 28, wore down from the body shots that Peterson was hitting him with.

Avanesyan made some mistakes in the fight that caost him a chance of keeping his WBA title. The major mistake that Avanesyan made was letting Peterson crowd him to work on the inside. Avaneysan should have watched Peterson’s past fights to learn that it wouldn’t be a good idea for him to fight him in close.

The victory for Peterson puts him in position to fight the winner of next month’s unification fight between WBC welterweight champion Danny Garcia and WBA Super World 147lb champion Keith Thurman. It’s nice how Peterson is on the verge of a nice payday opportunity against the Garcia-Thurman winner. Peterson’s record in his last two fights coming into the Avanesyan bout was 1-1. Peterson was beaten by Danny Garcia by a 12 round majority decision in April of 2015. Peterson came back from that loss to beat Felix Diaz by a somewhat controversial 12 round majority decision in October 2015.

It was learned later that Williams Jr. suffered a jaw injury during the fight. It’s unclear at what point the injury occurred. Williams Jr. was whispering to his corner before the start of the 6th round. It appeared that he might have been telling his trainer about the injury that time. After Browne knocked Williams down with a right hand in round 6, Williams Jr. motioned to his jaw and stayed down for the full 10 count. He clearly didn’t want to continue fighting.

Browne knocked Williams down in round 2, but lost a point after he hit him while he was on the canvas. The knockdown came from a nice jab from Browne. But instead of backing off and letting Williams Jr. get up off the canvas, Browne unloaded on him with a left hand in the back of his head. It was a strange move by Browne, because Williams down on the canvas for a long time. For Browne to not see that Williams was down is odd. But even if he didn’t see him down, the question is why he hit him in the back of the head. The referee could have disqualified Browne for that foul, but he instead just a point away from him.

After the fight Browne, ranked WBC #11, WBO #11, IBF# 13, called out WBC light heavyweight champion Adonis Stevenson. Browne said that he wouldn’t hit Stevenson if he’s on the canvas. I hope Browne doesn’t hold his breath waiting for Stevenson to give him the chance to fight him. I don’t think Browne is going to get a title shot against Stevenson until he’s ranked No.1 and has earned the right to fight him as a mandatory challenger.