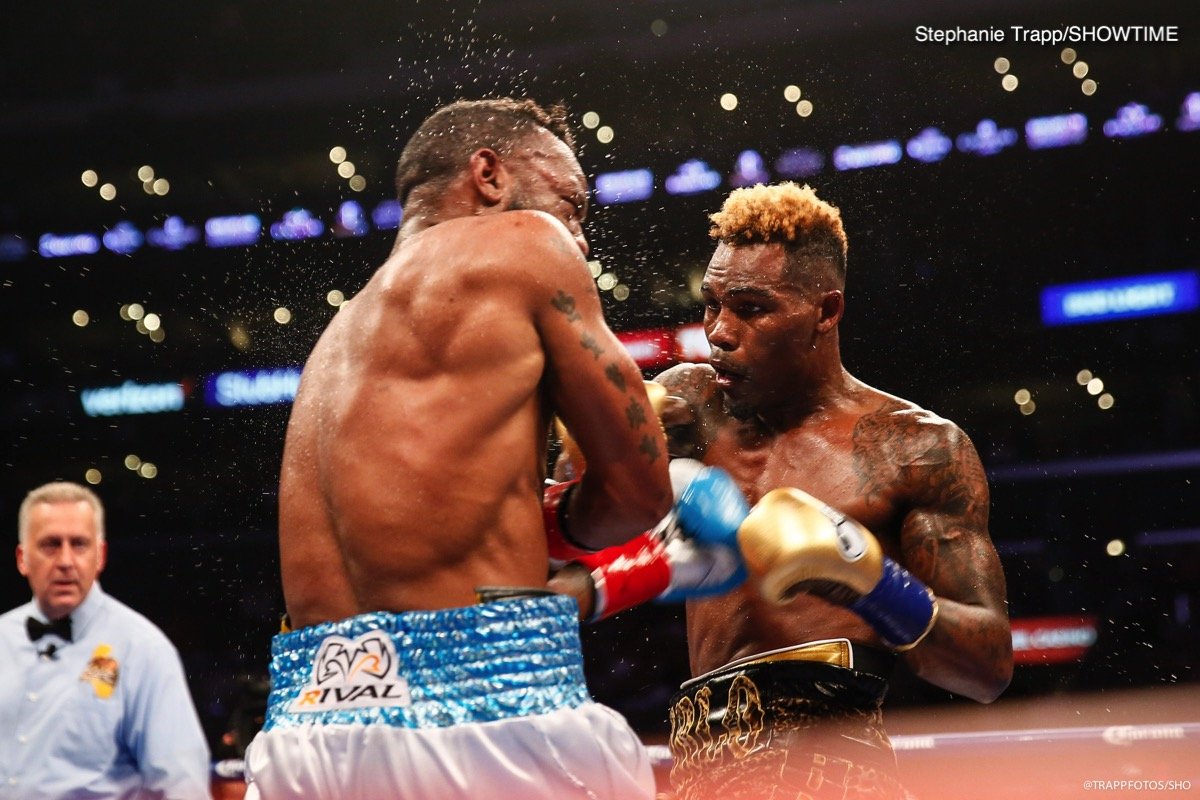 WBC junior middleweight champion Jermell Charlo (31-0, 15 KOs) took the fight to Austin ‘No Doubt’ Trout in knocking him down twice en route to beating him by a 12 round majority decision on Saturday night at the Staples Center in Los Angeles, California.

With knockdowns in rounds 3 and 9, Charlo was able to get the better of the 32-year-old Trout on the scorecards in winning by the scores 113-113, 118-108 and 115-111. Even though Charlo knocked Trout down twice in the fight, the bout was close enough to be scored a draw.

Trout was the better fighter in seven of the twelve rounds. When Charlo was landing hard shots, he was hurting Trout. Unfortunately for Charlo, Trout was hurting him back with his own hard punches, and outworking him during the crucial championship rounds. When Charlo should have been looking to finish strong in the last three rounds, he let off the gas and allowed Trout to take the championship rounds.

Trout looked to be on in a hopeless situation after being knocked down in the 9th but he came storming back in rounds 10, 11 and 12 to make the fight appear to be even on the judges’ scorecards who seemed to have a better grasp of was taking place inside the ring. The judge that had it 113-113 scored the fight as it played out inside the ring.

Charlo, 28, showed good punching power in hurting Trout numerous times in the fight, but he didn’t show much in the way of ring IQ. Trout was the smarter fighter at all times in the fight. Charlo was just the bigger puncher, but also the one who was making crucial errors by no putting enough pressure on Trout each time he had him hurt. It looked to some like Charlo was purposefully backing off when he had Trout hurt instead of looking to go for the Coupe de Grace to finish him off.

In watching Charlo back off when he had Trout hurt, all I could think is that he lacked the killer instinct and only was able to thrive when his opponent was taking the fight to him. Charlo is a fighter who seems to fight better when he’s angry and annoyed than when he’s expected to take the lead. Charlo is more of a counter puncher than someone that initiates the action.

Charlo came into the fight with four consecutive knockouts, but that streak ended against the wily Trout, who fought better than him down the stretch. Charlo had the punching power and speed advantage, but he wasn’t able to use his ability the way he needed to due to his shaky decision making.

Charlo was complaining before the fight that he deserved to be a top 10 pound for pound fighter, but his performance against Trout didn’t increase his chances. He didn’t look good enough tonight to rate being put in the pound for pound list.

Charlo showed tonight that he’s NOT in the same league as IBF/WBA junior middleweight champion Jarrett Hurd. Charlo will lose to Hurd and lose badly in my opinion.