The simply shattering one-punch KO that is the subject of this article doesn’t fall into either of the above three categories, yet it isn’t really an obvious pick for a best-ever knockout.

But the painful job the somewhat underrated Ray Mercer inflicted on Francesco Damiani, also an underrated fighter in some ways, does rank as one of this writer’s fave KO’s. You may recall the KO, and why it has been described here as “shattering.” It was, literally.

Mercer was unbeaten at 16-0, but in a couple of his fights the 29-year-old had looked less frightening than his nickname would suggest; his split decision win over Ossie Ocasio, for example. Mercer, though, was coming off a thrilling win over a determined Bert Cooper, the 12 round slugfest a modern-day classic.

Damiani was also unbeaten, the 32-year-old sporting a 27-0 record. Yet Damiani’s biggest wins – his WBO title win over Johnny du Plooy, along with his first defense against Daniel Eduardo Neto and an earlier revenge win over Tyrell Biggs – had taken place in Italy.

Plenty of fans in the Trump Taj Mahal knew little about Damiani that night in January of 1991 when he defended his WBO strap against Mercer. 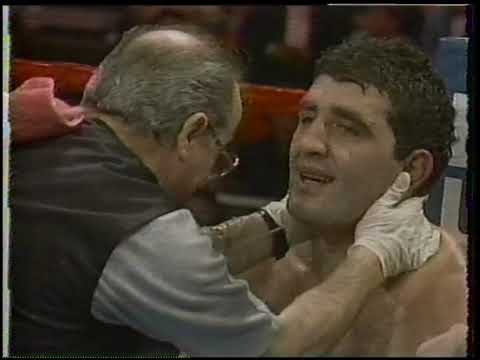 Like Mercer, Damiani had represented his country at the Olympics, this in 1984, Damiani winning a silver medal (losing to eventual gold winner Biggs). And against Mercer, Damiani was putting on a boxing clinic. Mercer was made to look somewhat clumsy as Damiani used his fast hands, his fine boxing brain, and his effective game plan to pile up the points, round after round. Mercer might never have grown discouraged, yet he did look it at times. Damiani was enjoying his ‘coming out party.’

But Mercer, one helluva tough fighting man, pulled off a stunning comeback KO in the ninth round. In the gym, Mercer had been practicing his left hook/left uppercut, and against Damiani the shot worked a treat. Mercer uncorked his hybrid shot and the tip of Damiani’s nose took the full force of it. The Italian went down in a heap, both gloves cupping his face, his blood splashed across the canvas. It turned out the punch had shattered Damiani’s nose. Just stop and let it sink in for a while; how excruciating the pain must have been.

Mercer had turned things around, in so doing keeping himself in line for some bigger fights down the road. At the time of the nose-splintering KO Mercer was behind on all three judges’ cards. “Merciless,” a hardened former army sergeant, showed his fellow fighters how to keep going, how to never give up.

Later that year, in his only other fight of 1991, Mercer scored an even more brutal and savage knockout – this one over an unbeaten Tommy Morrison. Mercer began 1991 with a bang. He ended it with a vicious explosion.

Again, Mercer is, in my opinion, underrated by some fans and experts. Ray may not have ever become a “legit” world champion, having to make do with the then still quite newly minted WBO belt, but he really did light up the heavyweight division in the 1990s. And Mercer really did carry vicious, savage punching power. Just ask Francesco Damiani!