One of the fighters I really wish I’d seen Mike Tyson fight, along with David Tua, is Ray Mercer. Both fights could have happened, yet for whatever reason or reasons, they didn’t take place. Tyson was a special fighter, we all know that, yet if he couldn’t scare a foe, if he couldn’t bully him, “Iron Mike” was often in trouble, dragged into a hard fight, even beaten (see Buster Douglas in 1990, and Evander Holyfield, in 1996 and again in ’97).

Tua would not have been intimidated by Tyson, not a bit of it, and had these two met, some time in the late 1990’s, we might have seen a special fight. Or we might have seen a more mentally prepared Tua smash the former champ. Again, it’s a Dream Fight and nothing more.

But as far as Mercer is concerned, the Tyson fight was close to reality. And no one is more heartbroken that the fight didn’t get over the line, even all these years later, than Mercer himself. Always accommodating to boxing writers as well as to his fans, the Olympic gold medal winner and former WBO heavyweight champ tells it like it is in interviews. In one such interview with East Side Boxing, “Merciless” spoke about the time he signed to fight Tyson, how he began training for the fight, but how he was ultimately left deflated when Tyson “pulled out.”

“I’m friends with Mike and see him quite a lot,” Mercer told this writer a while back. “I really do regret not having fought him. I actually signed a contract to fight him in 1989 and started training for the fight. But he pulled out – he did that a lot when he knew he’d be facing a guy who was in shape and wasn’t scared of him. I actually cried when Buster Douglas beat him. I’d have done that to Tyson.”

Had Tyson, still unbeaten, met Mercer in 1989 or 1990, it seems likely Tyson would have had far too much seasoning for the still advancing Mercer; who only went pro in 1989. Mercer was just 12-0 by the end of ’89, and he was 13-0 when Buster shocked the world in Tokyo. So it would surely have been too quick for him to face Tyson then. Still, other fighters have won a world title after having had a lesser number of fights. But Mercer got better as a fighter as he got older, his prime years arguably being 1995 and ’96, when he was warring with Holyfield, Lennox Lewis and Tim Witherspoon. That version of Mercer would likely have given Tyson hell, even the peak version. With his granite chin, overall toughness, power, good engine, and refusal to quit, a hungry Ray Mercer would have been all kinds of wrong for the 1995 or 1996 version of Tyson.

Things would have been so different, for both heavyweights, had Tyson and Mercer fought. Imagine the 23-3-1 Mercer who came desperately close to beating Lewis (Ray says Lennox himself told him to his face he won that fight), in there with the 43-1 Tyson who fought Frank Bruno the second time. That’s a Dream Fight with enough depth to it to give a fight fan palpitations, and maybe even a few sleepless nights. Who wouldn’t have paid good money to see that one?

Ray Mercer instead has to make do with the good memories that are his fine wins over Tommy Morrison (“that was me at my most brutal,” he says), Francesco Damiani, Witherspoon, and Bert Cooper; along with his near-misses against Lewis and Holyfield. Mercer had some career, but a win over Tyson would have elevated him into another stratosphere. 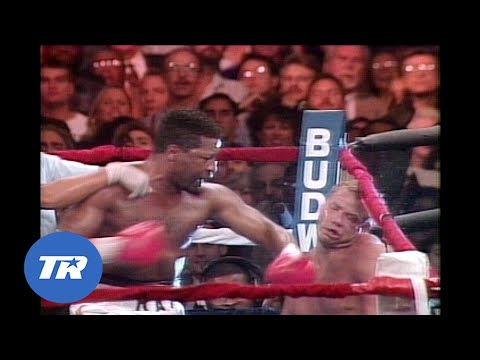