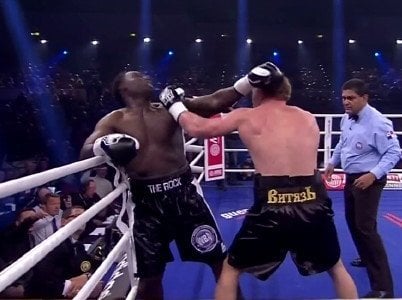 I just don’t understand how Rahman could be dehydrated before the fight. I could understand it if he was trying to make weight, but that doesn’t make sense because heavyweight don’t need to make weight and the whole of weigh-ins for heavyweights seems kind of ridiculous and totally unneeded.

Rahman was hurt early in the fight after getting hit with a hard right hand from Povetkin in the 1st round. Rahman’s legs turned to rubber for a brief instant before he was able to continue fighting without showing any additional signs of being hurt. In the 2nd, Rahman threw a few pawing jabs but was hit with a hard left hand by Povetkin that staggered Rahman’s legs causing him to back up to the ropes.

Povetkin then went after Rahman, landing combinations to the head, causing Rahman to grab onto the ropes for support. It looked like Rahman needed to hold onto the ropes in order to keep from going down. With Povetkin not letting up on Rahman, referee Gustavo Padilla stepped in and stopped the fight at 1:46 of the round.