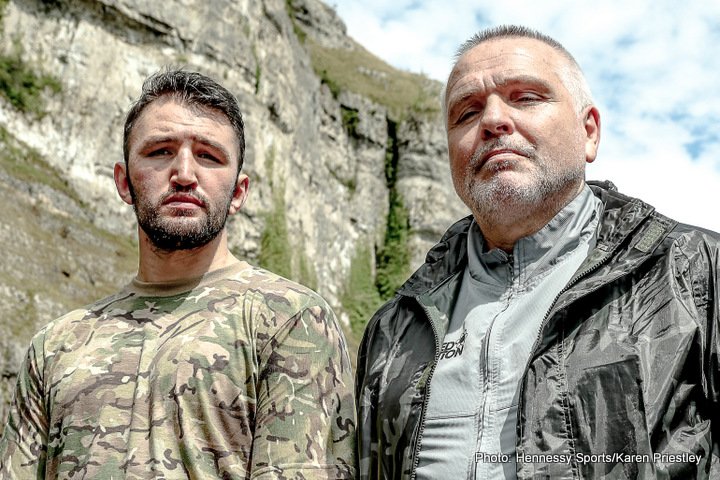 Peter Fury believes son Hughie Fury has not only “skills to burn” but growing power to bring new fans behind his charge towards a world title.

The Furys are in Bulgaria preparing for tonight’s IBF world heavyweight title eliminator against Kubrat Pulev with a lucrative shot at Anthony Joshua the dangling carrot.

Hughie’s technical skills have never been in doubt with many feeling he deserved to seize the WBO world title against Joseph Parker last year – but Peter Fury is now keen to highlight the attacking instinct shown in his emphatic British title stoppage of Sam Sexton last time out.

Peter Fury said: “He’s improved power-wise and his all-round game as well. He’s attacking a lot more than he used to do because he knows he can’t leave it to the judges.

“He knows it’s not just a simple case of just slipping and sliding and outboxing his opponent. He knows he’s got to do more than that and be please the crowd as well. He’s come on a lot.

“He’s hitting very hard now as well. His punch power has gone up. He’s maturing now – he’s still very young at 24. You can tell how much he’s developed over the last 12 months.

“He’s got skills to burn and he’s an elite heavyweight. He’s 6’6” and 17 stone. He trains hard and is totally dedicated. If he doesn’t know his way around a boxing ring, nobody does!

“It’s got a good jab and the thing is with Hughie now, if he hits you with the right hand, he’ll put you to sleep with it. It’s not easy to land punches on world-class opponents but I believe he’s got all the tools in the box to do very well.

“He won’t stop. He wants to win a world title. Even if and when the Pulev fight goes very well, he’ll be straight back in the gym wanting to know when the next fight is. He wants to keep fighting and taking on all obstacles.”

Gutsy British heavyweight champion Hughie Fury has described his decision to take on Kubrat Pulev in front of the hard-hitting Bulgarian’s home crowd as a “no brainer”.

The 23-year-old will travel more than 2,000 miles to fight Pulev in an IBF final eliminator match in the country’s capital Sofia, on Saturday 27 October. The pair are competing for the right to face the winner of the September 22 showdown between champion Anthony Joshua and challenger Alexander Povetkin.

Having come face-to-face with his opponent for the first time at the launch press conference in Bulgaria, Hughie Fury said: “People might look at me and ask ‘what is he thinking fighting over there? It’s such a risk’, but that’s not how I see it. For me this is a massive opportunity and I plan to make the most of it.

“A couple of guys in the division have ducked Pulev and that tells you that he’s a dangerous opponent. Listen, I’m prepared to fight anyone, anywhere in the world and these are the fights that I want. I want big fights and I want to take over the heavyweight division. That’s what I believe I can do.”

He added: “Fighting outside of the UK doesn’t bother me. At the end of the day there are only two people in the ring, so it doesn’t matter where the fight is taking place. There’s no pressure on my side. If anything, there’s more pressure for him to perform in his own back yard.

“He is a good boxer and has lots of experience, but he has to bring it all when he faces me. I’m looking forward to the challenge.

“In my last fight against (Sam) Sexton I didn’t get out of second gear. This time fans will see a different Hughie Fury. To all my fans who have supported me from day one, on October 27th you are going to see a spectacular performance and it will be a brilliant night to remember.”

Peter Fury, Hughie’s father and trainer, said: “We’ve been working on Hughie’s strengths in training rather than worrying to much about Pulev.

“We know what we are facing, Pulev is dangerous. He is an experienced fighter, but this is fight we all wanted. It’s been a good camp so far and the closer we get, Hughie will only improve and get better.

“Hughie has the tools to beat him and as soon as the bell goes, he will be ready!”

Tickets to Fire & Fury: Pulev vs. Fury are on sale now via Eventim (eventim.bg)

Fire & Fury: Pulev vs. Fury will be presented by Ivaylo Gotzev and John Wirt’s Epic Sports and Entertainment, together with Fury’s promoter, Hennessy Sports, and will be broadcast live in the UK on Channel 5.