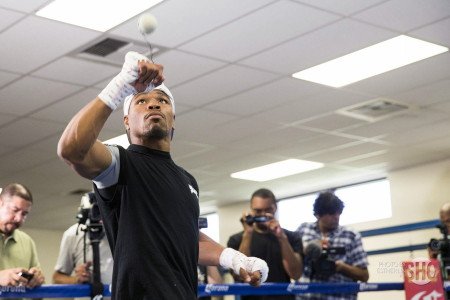 It’s certainly one of the more anticipated fights that Al Haymon’s Premier Boxing Champions brand has delivered thus far, and ahead of Saturday’s clash with Adrien Broner from the MGM Grand in Las Vegas, “Showtime” Shawn Porter has spoken via Sky Sports to criticise his opponent for seemingly refusing to discuss the contracted catch-weight stipulation and rehydration clause, that essentially tip the scales in favour of the physically smaller Broner.

Porter, who has boxed up at 154 lb in the past and who comes in as a genuine welter, blowing up to 155-160 on fight night, is angry that Broner is refusing to talk to the media about the catch weight – something “The Problem” insisted on if the fight was to be made.

Maintaining his professionalism, yet venting his frustration, Porter said;

“And the more we talk about it the more the resentment sets in because I’m a professional doing what I do at this high level for so long and my weight (has been) 147 for so long.”

With a message for fellow Ohioan and certified motor mouth Broner, Showtime said;

“You wanna move up into my weight then move up. Don’t be scared, don’t be worried. Don’t be afraid. Put your skill on the line along with your record. Put it all on the line at 147. Don’t put it at 144 and then decide not to talk about it.”

With all this kind of talk one has to wonder how badly the cut is affecting Porter both physically and mentally? The reality is that is why it’s there in the contract, and despite Porter’s father Kenny insisting there will be no problems making the 144, I can’t help but think otherwise.

We will get a first look on Friday at the weigh in and after that bell rings on Saturday. But they knew this a long time ago.

I just hope Team Porter are not attempting to lay a defence in the event they lose the fight?

Time will tell, I guess.