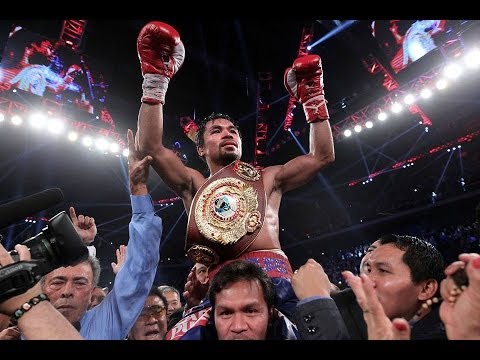 Looking at the score cards wouldn’t tell you the whole story of Manny’s victory of Brandon “Bam Bam” Rios. If that was all you had to find out what happen Sunday (Saturday night here) at the Cotai Arena, Venetian Resort in Macau, China, then you would probably think Brandon Rios didn’t put up much of a fight. However, if you asked Manny Pacquiao, he would change your opinion, explaining that Rios was dangerous right up until the final bell.

In fact, Manny told HBO’s Max Kellerman in the post-fight interview that Bam Bam hurt him in the fifth round. Manny appeared very tired, and speaking softly gave an honest response when admitting Rios hurt him. He thought it might have been in the fifth round. Regardless, Manny added that Rios was very strong and tough. Manny said it was a hard fight for him; although, he knew he was winning, so in the twelfth round, he backed off, giving up any possible chance he might have had for a stoppage. He wasn’t about to make the mistake of getting careless again.

Speed was the difference in the fight. Manny used both foot and hand speed to foil most of Brandon’s attempts to get any kind of attack started. He also mixed things up, going up and down with his combinations. He changed angles too, both on offense and defense. He did have some moments when he remained stationary long enough for Rios to throw some bombs. He also seemed to take unnecessary punishment in close. It was during, for lack of a better name, what can be called near clinches. In those instances, Manny would have Bam Bam’s left tied up, but not the right. Rios took those opportunities to work Manny over with his right, clubbing him to the body and head or back of the head. Why Manny didn’t push Rios away, or tie up both arms is a mystery? A couple of times, Manny made matters worse when he seemed to look to the referee as if to complain? Maybe he thought referee Genaro Rodriquez was going to warn Rios about the rabbit punches?

Rios is one tough son of a gun. When Manny would nail him with single or multiple shots, Rios would smile and shake his head that he wasn’t hurt. A lot of fighters do that, but often times it is false bravado, and they’re really hurt. With Rios it was true, he wasn’t hurt. He still remained strong, and he kept throwing bombs that for the most part were just missing their target. In between rounds, Robert Garcia knew his man was losing the fight in the judges’s eyes, but they knew they weren’t going to win on points again a speed demon like Manny. They wanted to put his lights out, and they believed they still had a chance to do so right up to the final bell.

Manny was fast enough, and threw enough punches to keep Rios occupied with trying to block them. That’s always a good way to keep the guy from throwing any punches himself. In other words, there’s no a best defense is a good offense, because you don’t get a chance to play offense. In situations like that, it’s always good corner advice to tell your man to “punch with him”. But, that’s usually easier said than done. When you’re getting cut up and puffed up around the eyes, you tend to think about self-preservation. It’s instinct.

Two things come out of this fight. The first is Manny’s back in the sense that he now has that win that’s eluded him for two years. Secondly, Rios put up a good fight with one of the best fighters in the world. Manny’s accomplishment might mean more to him and his fans that it does to the boxing audience in general. Specifically, Manny might have won every round, but he still didn’t look like the Manny of old, and no wonder. He’s older and has been through a lot of wars. He also has greater and greater responsibilities that can way on a man. Can he still beat the top fighters, including Floyd Mayweather, Jr.? Maybe, maybe not. He seems much more subdued now. That old jittery fire seems to have a smaller flame now. It’s no longer a roaring blaze. Maybe he should go out with a victory? Fans would hate to think Manny wasn’t around to create his kind of excitement anymore, but maybe he should think of himself and his family. He’s got enough money, and the level of love and admiration by his countrymen couldn’t be any greater. He’s already idolized. Another victory or two couldn’t change that.

What about Rios? He lost, yes, but as previously mentioned, he fought a good strong fight. He might have been on the losing end of a point total, but he knows that he hurt Manny. There’s a good chance it was more than just once, as Manny mentioned. That’s not because Manny wasn’t admitting they’re were multiple, times, it was probably because the hurt from the first time never left him. More hurt is kind of an after thought. Rios’ swollen eye’s and small cut will heal fast, and he will be on a tear again with some poor unfortunate welterweight who thinks he might be able to out point him. Brandon said it best when explaining he had fast sparring partners, but they weren’t as fast as Manny. There isn’t anyone in the welterweight division Manny’s king of speed and power, so Brandon’s probably safe. He’s going to be able to land his big shots, and when he does, the painful grimaces will follow if they’re still standing.