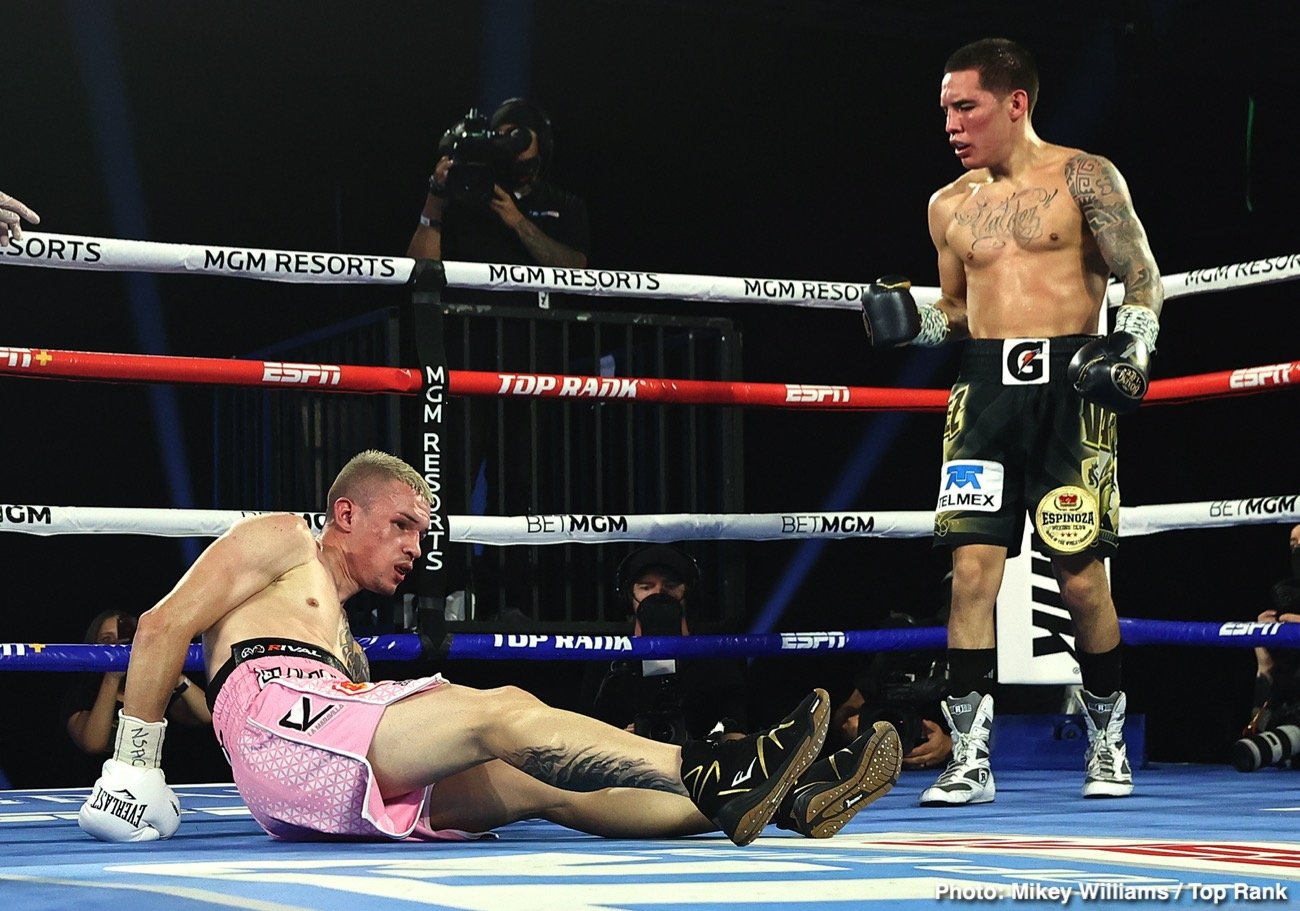 Oscar Valdez sealed his victory with a 10th round knockout win over Jayson Velez, and Isaac Dogboe and Edgar Berlanga also won on the undercard on Tuesday night at the MGM Grand in Las Vegas, Nevada.

Valdez put Velez down three times in the fight, dropping him in round five and twice in the tenth round.

Referee Tony Weeks decided he’d seen enough and chose to stop the fight after the second knockdown of Velez by Valdez.

The first knockdown was brutal, with Valdez catching the unsuspecting Velez with a hard left hook to the head that put him down.

It appeared that Velez, never saw the shot coming, and he had no defense for it. But even if Velez had spotted the punch coming, he would have had a hard time taking it.

After getting back up, Velez was met with a big right to the head by Valdez, and the Puerto Rican fighter immediately went down. Referee Tony Weeks wisely stopped the fight.

That wasn’t the first time that Velez didn’t spot Valdez throwing one of his left hooks.

Velez, 32, had done the same thing in round five, and he was knocked down in that round as well.

All in all, it was a shaky performance by Valdez, who needed an impressive performance to build momentum for his fight against WBC super featherweight champion Miguel Berchelt.

Had Valdez dominated Velez, that would have given his promoters at Top Rank a sign that he’s ready to take on Berchelt.

Valdez didn’t do that. He had problems with Velez throughout the fight, and he was lucky that his defense was so weak. If Velez’s defense was on point tonight, he might have won.

If you’re Top Rank, you need to sit Valdez down and let him know that it’s not a good idea for him to take on a talented guy like Berchelt.

In the co-feature bout, super middleweight prospect Edgar Berlanga (14-0, 14 KOs) took care of Eric Moon (11-3, 6 KOs) in stopping him in the first round. Berlanga backed Moon to the ropes and hit him with two big right hands to the head.

The second hit Moon cleanly on the side of his head and knocked him down. When Moon hit the deck he tumbled end over end and was severely hurt as he lay there on the canvas.

Moon obviously knew what he was getting himself into in the fight, as he came flying out of his corner at the bell, and immediately went after Berlanga, trying to knock him out.

That didn’t work well for Moon because he was met with several hard punches from Berlanga that made him think twice about wanting to continue to press the action.

Moon then retreated to the corner, and then just covered up on the ropes. In hindsight, that was probably the worst thing Moon could have done because he made it easy for Berlanga to pummel him.

Against a knockout artist like the 23-year-old Berlanga, you don’t want to fight with your back against the ropes, not even for an instant.

“We prepared to go rounds, but I got him hurt and got him out of there,” said Berlanga. “I still have so much room to grow as a fighter.

“The power is there, but I will show everyone that I am a well-rounded fighter. The knockout streak is cool, but there is more to me than first-round knockouts.”

The fight was competitive for the first six rounds, but then Dogboe increased the pressure and wore Avalos down. The fight stopped at 2:23 of round eight. Earlier in the fight, Dogboe was docked a point for a low blow in the fifth.