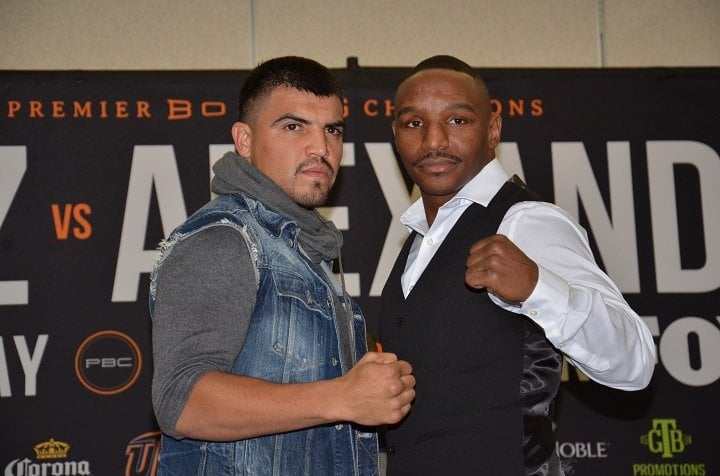 Also in attendance at Thursday’s press conference was former world champion Austin “No Doubt” Trout and women’s featherweight world champion Jennifer Han from El Paso, who will both compete in undercard attractions on Feb. 17.

Here is what the participants had to say Wednesday from the Wyndham El Paso Hotel:

“We’re warriors up here. Devon is not going to like me much come February 17 and I know I won’t like him much. This is business, because I’m here for the victory.

“I’ve been counted out many times in this sport. I’m not going to take any shortcuts in training, I’m just going to keep listening to what my coach wants me to do so I can be at my best.

“Being on this stage is very significant for me. Thankfully I have people who don’t stop believing in me. I’ve seen both sides and been in the middle. At this point, the only place I’m focused on going is up. It’s all in front of me.

“We have mutual respect for each other. He’s a tremendous fighter just like me. Everyone knows it will be two warriors stepping into the ring on February 17. We’re going to go all out. I’m going for a victory just like him.

“I’m going to keep coming forward until my hand is raised in victory. One day I will be the champion again and it starts February 17 in El Paso.”

“Both of us are very good, skillful boxers and that should make for a great matchup. Everyone knows we both come to fight and have been world champions so it’s going to be exciting on fight night.

“Boxing is what I love to do. This is what I was born to do. I’m so thankful to my coach, Kevin Cunningham, for sticking by me these last few years and helping get me back to this point.

“I’m excited about this fight and I know Victor is too. The fans in Texas are always fantastic and they should expect an action packed night. It’s an awesome feeling to be able to showcase my talent. This is what I’ve been working hard for.

“I’m an all-around good fighter and I think my speed and quickness will be the difference. No one can hit me when I’m at the top of my game.

“I don’t see this one going the distance. We’re both very hungry. We know that a loss puts us at the back of the line and neither of us can afford that.

“I’m really thankful to El Paso for hosting this fight. It’s going to be a great night and I’m happy to be the main event. Everyone should come out for a great show. It’s going to be lots of fire and fury. Victor and I are really coming to fight.”

“I’m looking forward to fighting close to home. Many of you know I was born here in El Paso and grew up right across the road in Las Cruces, New Mexico. To be here again is surreal and it’s even more special being on a great card like this.

“This is where it all started for me. I’m going back to the roots of where I won a championship. It feels good to bring everything full circle. I’m blessed to be a part of this event.

“I’m really proud to be part of this card and this great night of boxing. I can’t wait to fight next to “The El Paso Sweetheart” Jennifer Han. I’ll be the “Las Cruces Tough Guy” on fight night and give everyone a great show.”

“I’m so excited to be part of this card. There is so much talent and it’s going to be an amazing show. We’re going to make El Paso extremely proud on February 17.

“I’ve been training very hard to fight my mandatory. She’s coming from Argentina to take my title so I need everyone to come out and support me on fight night.

“I’m a professional fighter and I love what I do. This is what I was born to do. I’m so excited to do this in front of my friends and my family and peers. Without the support of the El Paso community, I wouldn’t be here.

“Women’s boxing is growing and growing and I’m proud to be a part of it. Come out and support us and we won’t let you down. It’s going to be a great show.”

“I know that there is a great boxing community here in El Paso. Boxing is a part of the culture here and we’re glad to be a part of it.

“One of these fighters is about to take a big step forward in their career, but it doesn’t happen without a win on February 17. We’ve been in camp training hard and Victor will be ready.

“Victor is never in a bad fight and I expect this will be another great one. We have some new things coming and Victor is going to show you something you’ve never seen before. We plan on being victorious on February 17.”

“The winner of this fight will go on to bigger and better things and the loser has to get back at the end of the line. That’s not the plan for Devon, and Victor is in the way right now. Devon is going to be well prepared and I expect it will be an action packed fight.”

“It’s great to be back in El Paso with a big fight like this. It is truly a great fight town. I’m really looking forward to this card and I think the fans here are going to love it.

“Our main event is a true crossroads fight. Victor Ortiz and Devon Alexander are battle-tested in one of the toughest and deepest divisions in boxing. The winner of this fight will be back on the path to a world title.

“Victor Ortiz brings an exciting, aggressive style and he always comes to fight. That’s why he’s one of the most entertaining fighters in the sport today. Devon Alexander has overcome some health issues and is back in the ring with one thing on his mind, to regain a world title.”