Former heavyweight king Mike Tyson has uploaded another quite incredible video of himself undergoing what looks to be an intense workout session. Tyson just might be the most impressive-looking 55-year-old fighter out there; Tyson certainly appears to be the best-conditioned 55-year-old marijuana smoker out there.

The word is Tyson will return to the ring sometime in September, yet there is no word yet on who his dance partner will be.

There are, as fight fans know, plenty of people willing to get in there with Tyson (and pick up a big payday) – with big names such as James Toney, Evander Holyfield, and Shannon Briggs (who now seems set to get it on with “Rampage” Jackson) calling Tyson’s name; with Kevin McBride, the last man to defeat Tyson, also stating how he is interested in a return meeting with the man he shockingly made quit way back in 2005.

Tyson, not too long ago, mentioned Lennox Lewis’ name as his next foe, with Lewis saying how, if there were sufficient fan interest, he would consider it.

But right now, Tyson is working hard for somebody, he is pushing his body hard as he whips himself into shape once again. Tyson looked good in last year’s exhibition bout with Roy Jones, and of course, the bout did huge numbers on P-P-V. There’s no real reason to think Tyson’s next bout will not be a success also.

Tyson’s trainer, Rafael Cordeiro, spoke with MMA Fighting, and he said “Iron Mike” will be fighting someone in September. 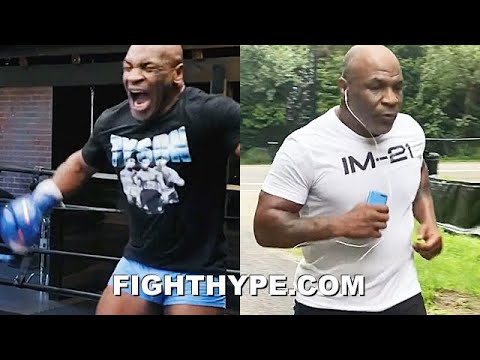 “We continue training. He’s an athlete and is always training, hitting pads there in the gym,” Cordeiro said. “I think we’re going to have something in September. I don’t know who because his company Legends Only League is working on it and negotiating a TV deal so they can announce a schedule, but we’re training. We’ll be fighting in September.”

As fans know, the Tyson-Jones exhibition bout was televised by Triller. Tyson’s next bout will not be, the 55-year-old having had a falling out with the folks at Triller. Tyson recently posted the caption, “You aren’t owed s***. Fight like hell for everything” to his Instagram page, the message attached to footage of his workout.

Tyson is clearly still full of fire at age 55.

2 thoughts on “Mike Tyson Training Hard Again For Someone; Who Will He Fight In September?”