Mike Tyson, along with Roy Jones, started the currently all-consuming, polarizing big-fight exhibition trend, so it’s no real surprise “Iron Mike” is interested to see what will happen when Evander Holyfield attempts to step back in time as he fights Vitor Belfort in Miami, Florida. According to a tweet from Mike Coppinger, Tyson is fully expected to be there tomorrow, at The Hard Rock, watching what happens when his former foe, now aged 58 (59 next month) fights (or tries to fight) the MMA legend.

It’s no secret Holyfield wants another go at Tyson – who he is 2-0 over – and the folks at Triller are hoping to be able to stage Holyfield-Tyson III some time next year. We can moan and groan about these curiosity/celebrity/big-name exhibition bouts all we want, but the complaints seem destined to continue to fall on deaf ears. Nostalgia sells and there are plenty of fans (some people would call them suckers) out there who are willing to pay good money to see the likes of Tyson, Holyfield, James Toney (who is set to face Jeremy Williams next month), David Haye and others as they attempt to do what they once did so well.

And make no mistake: if Holyfield gets the win tomorrow, and then gets back in the ring with Tyson, it will be huge. As in pay-per-view huge. Tyson, like Holyfield, still has an incredible physique; both men looking much younger than they actually are. But what about what’s on the inside? Looking great does not equate to being able to fight great. Can Holyfield still take a good shot to the jaw at age 58 (59 next month)? Again, Holyfield should not be in a position where he is going to give us an answer, but tomorrow night’s fight, and the card in its entirety, has attracted a ton of attention.

Imagine the hype a Holyfield-Tyson III would generate. We may as well get used to it (you perhaps already have) – this current exhibition trend ain’t going anywhere, at least for the foreseeable future.

Now, let’s hope Tyson, along with the rest of us, doesn’t witness something truly disturbing tomorrow night. 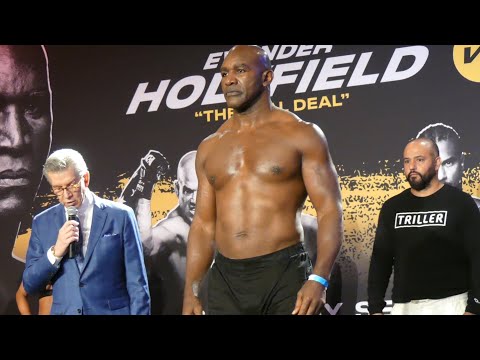