Manny Pacquiao says he wants to take back his WBA welterweight title from champion Yordenis Ugas on August 21st in their fight on FOX PPV. Ugas (26-4, 12 KOs) will be Pacquiao’s opponent after Errol Spence Jr had to cancel because of a torn retinal injury to his left eye that he suffered during a sparring session on Monday.

Ugas had been slated to defend his WBA title in the chief support bout against Fabian Maidana. However, during sparring, Maidana also suffered an eye injury on Monday, which briefly left Ugas without an opponent until getting the call to replace Spence in the main event.

The extent of the injury was too severe for IBF/WBC welterweight champion Spence (27-0, 21 KOs) to carry through with the fight, so he’s now out of the picture in favor of Ugas.

For Pacquiao (62-7-2, 39 KOs), he looked upset in reacting to the news of Spence pulling out. Pacquiao has been training for the last two months to prepare for Spence, and he’s forced to settle for a lesser fight against WBA 147-lb champion Ugas.

With Spence pulling out of the fight, Pacquiao has a chance to win back his WBA title from Ugas, and he’s looking forward to proving who the better fighter is between them.

Read:  Andre Ward discusses Spence vs. Crawford, doesn't want to give tips to either one

“I pray for him for a fast recovery, and I hope everything is fine with him,” said Pacquiao to Team Pacquiao in reacting to Spence pulling out of their August 21st fight due to an eye injury.

Spence had three different doctors examine his injured left eye, and each reached the same conclusion that he had suffered a retinal tear.

“I worked hard for this fight; I’m ready for this fight. I trained like when I was young,” Pacquiao continued. “I remember the fight with [Marco Antonio] Barrera. I’m so excited.

“Oh yeah, definitely,” said Pacquiao when asked if his and Ugas’ style of fighting will be entertaining for the fans on August 21st.

“Ugas is a fighter, and he claims he’s a champion. He took my belt, but we’ll settle it in the ring,” said Pacquiao.

One gets the sense that there’s a little bit of bad blood on Pacquiao’s part about losing his WBA title to Ugas. Thankfully, he’ll get a chance to regain his WBA belt on August 21st. 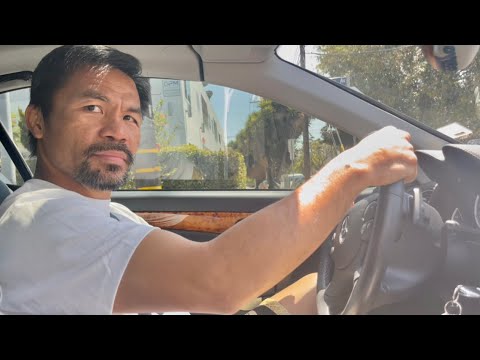 1 thought on “Manny Pacquiao: Yordenis claims he’s a champion, he has my belt”