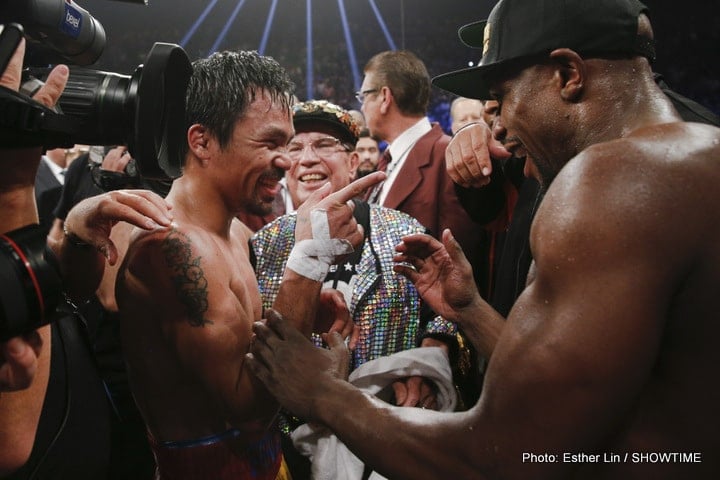 Superstar Manny Pacquiao is soon to face a young and very determined Jessie Vargas, in a fight that will contest the WBO welterweight title Pac-Man used to hold; but all everyone seems to talk about is who Pacquiao might fight after the Vargas fight (Vargas of course has other ideas and says he will defeat Pacquiao, by KO). It seems many fans and experts still wonder if Pacquiao will be able to entice Floyd Mayweather out of his own retirement for the purpose of engaging in a return fight.

On an appearance on Fox Sports’ Undisputed show earlier today, a smartly dressed Pacquiao was peppered with questions about the May 2015 “Fight of The Century” that he of course lost via wide 12-round decision (118-110 and 116-112, 116-112 for Floyd). Pacquiao said, in answer to whether or not he still believes he won the fight, that yes, he believes in his heart that he won the fight. Pac-Man was also asked about the shoulder injury he carried with him into the fight.

“I have had trouble with the shoulder since 2009,” Manny said. “Training for the Mayweather fight, we pushed hard. I felt like I had no [right] arm in the fight. I threw a lot more punches than him and I thought I did more than he did. But like I said, I know how to accept loss and I respect the decision of the judges. In my heart, if you ask me, of course I still believe I won the fight.”

Pacquiao went on to say how fans are not happy with the way the “controversial” decision of the fight was left at that, with no rematch. Pacquiao certainly wants a second go at Mayweather, but do fans really need to see it? Maybe, just maybe, if a Pacquiao with two strong and injury-free arms did fight Floyd again the fight would be more competitive. But would anyone really believe we would see anything other than another clear points win by Mayweather?

Mayweather, though, seems to be genuinely content in retirement and is bored whenever anyone asks him about a possible rematch. Pacquiao should be concentrating on his November 5 fight with Vargas, not on any other fight.