Has heavyweight contender Luis Ortiz been training the way he should have been doing over the holiday period? The Cuban came in at a career-heaviest weight of 243.4 pounds for tonight’s New Year’s Day showdown with former IBF heavyweight champ “Prince” Charles Martin. Martin came in heavier than his 42 year old foe (officially 42, plenty of folks say Ortiz is in fact plenty older), at 246.2, yet he is a fair bit taller than his fellow southpaw.

Judging by the physical appearance of the two veteran, cannot-afford-to-lose big men, Martin may have a real chance of winning tonight at The Hard Rock in Hollywood, Florida. In fact, 35 year old Martin, 28-2-1(25) has predicted a KO win. That would be quite a statement, as Ortiz has been stopped just twice; both times by Deontay Wilder. However, despite the flesh around his ample waist, plenty of fans – in fact most of them – think he will get the win tonight. Body types do not win fights, after all. 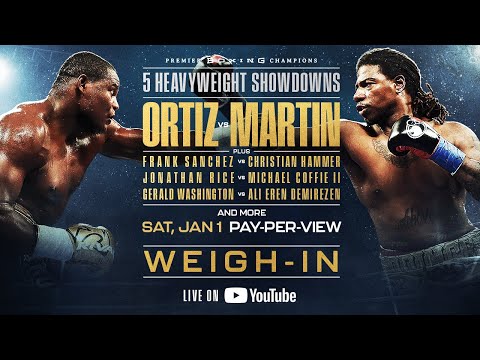 But Martin – who is perhaps destined to never be forgiven by fight fans for his truly awful showing against Anthony Joshua, when he lost/gave away his belt in 2016 – has at least worked hard for tonight’s interesting fight. Or it looks as though he has. Martin has sacrificed his Christmas, even if it looks as though Ortiz, 32-2(27) has not.

But forget who wins tonight; the big thing we fans want the most is a good fight, an exciting fight – not a slow-motion hug-a-thon. It’s rare to get a significant heavyweight match-up taking place on New Year’s Day and we hope Ortiz and Martin are both in the mood to make it a memorable occasion. Will we see a KO or stoppage tonight? Here’s hoping I’m wrong, but a typical Ortiz performance that sees him win a largely dull one on points is my pick.

Ortiz had better hope he doesn’t run out of gas, though. If he does, Martin might be able to start his planned comeback with a bang.

On tonight’s card, Jonnie Rice will fight his return fight with Michael Coffie; Rice having scored the upset back in July. Rice really raised eyebrows by weighing in at a whopping 283 pounds. Coffie, who came in at 278, will be gunning for revenge.

The unbeaten Frank Sanchez came in at 239 for his fight with late sub Christian Hammer, who tipped-in at 264.

We will be seeing some big, big men in action tonight.

1 thought on “Luis Ortiz Comes In Heavy For Charles Martin Fight Tonight; But Will It Matter?”