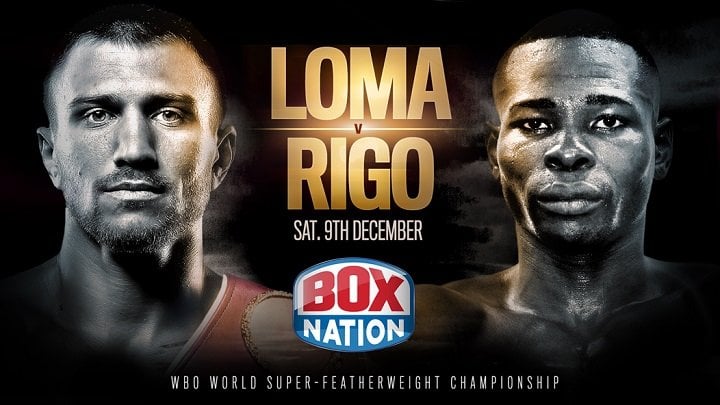 Promoted by Top Rank®, in association with Roc Nation Sports and Madison Square Garden, tickets to the Lomachenko vs. Rigondeaux world championship event sold out two months in advance! It is Lomachenko’s second advance sellout in his past three fights. His April 8 title defense against former world champion Jason Sosa sold out the MGM National Harbor one month in prior to the event.

“This is the Big Apple’s second-hottest ticket on the secondary market next to Bette Midler’s Broadway smash, Hello Dolly!” said Hall of Fame promoter Bob Arum, founder and CEO of Top Rank. “The Lomachenko vs Rigondeaux title fight is a signature event in the sport of boxing. It matches the two greatest fighters in Olympic boxing facing off against each other. Never before in boxing history have two boxers, each the winner of two Olympic gold medals, faced each other in a professional boxing match.”

“ESPN is excited to showcase this world championship event. For the first time ever, two-time Olympic gold medalists, Lomachenko and Rigondeaux, will go head-to-head and we are thrilled to have the opportunity to showcase the event to boxing fans across our platforms in English and Spanish,” said Burke Magnus, executive vice president of programming & scheduling, ESPN.

“It will be a big battle for boxing fans and boxing history,” said Lomachenko. “This battle will open our maximum potential. It will be the best New Years present for boxing fanatics. Trust me on this one!”

“I am excited about Vasiliy stepping back in the ring before the year is over. It is a great fight for all boxing lovers and the fans from around the world who asked for it,” said Egis Klimas, Lomachenko’s manager. “It is a historic bout for boxing where for the first time, two boxers, two world champions, each holding two Olympic Gold medals, will meet in the professional ring. I am looking forward to seeing it.”

“I’m thrilled to be part of this historic fight on ESPN because I’ve had my eye on fighting Vasyl Lomachenko for a long time,” said Rigondeaux. “I’m thankful that Roc Nation Sports and Top Rank made this fight happen and I can’t wait to make a statement on December 9 in New York City. Weight classes don’t win fights – fighters do – and I look forward to delivering the best performance of my career, beating a fellow legendary Olympian in Lomachenko and solidifying my place as one of the best pound-for-pound fighters of this era.”

“This fight against Vasyl Lomachenko is the marquee challenge that Guillermo has been coveting and we’re grateful for Roc Nation Sports’ hard work in making this a reality,” said Alex Bornote, Rigondeaux’s manager. “Throughout Guillermo’s career, he has never backed down from any fighter or weight class restriction, so we’re very excited to get to work. It’s going to be a battle, but Guillermo will make Cuba, Miami and all of his fans worldwide proud when he beats Lomachenko on December 9.”

“There has never been a fight between two, two-time Olympic gold medal winners until now and Roc Nation Sports is thrilled to announce this unprecedented event with ESPN and Top Rank,” said Roc Nation President & Chief of Branding and Strategy Michael R. Yormark. “Boxing fans will have the rare opportunity to watch two of the best Olympians in boxing history fight for supremacy and there’s no doubt this fight at the Theater at Madison Square Garden will be one for the ages. Regardless of weight class, Rigondeaux is ready to deliver an unforgettable performance.”

Lomachenko (9-1, 7 KOs), of Bilhorod-Dnistrovskyi, Ukraine, who has won his last six fights by stoppage, returns to the Mecca of Boxing ring for the first time since his one-punch fifth-round knockout victory of three-time WBO junior lightweight champion Roman “Rocky” Martinez on June 11, 2016 to claim Martinez’s title. This will be Lomachenko’s third defense of that title in 2017 and fourth overall. The Martinez victory not only made Lomachenko a two-division world champion, but he once again he broke a record doing it, winning world title No. 2 in a record least amount of fights — SEVEN. He followed that with his first defense of the WBO junior lightweight title, on Nov. 26, totally dominating Nicholas Walters. The previously undefeated former WBA featherweight world champion quit on his stool after the seventh round with his trainer and father Jobs Walters, telling referee Tony Weeks, ‘”No mas.” Not only was it a total domination but a boxing masterpiece painted on the canvas by Lomachenko. It concluded a year that had many media outlets declaring Lomachenko the “Fighter of the Year.” This year he stopped former WBA super featherweight world champion Jason “El Canito” Sosa in the ninth round and top-rated contender Miguel Marriaga in the seventh round, on April 8 and August 5, respectively. Lomachenko captured his first world title — the vacant WBO featherweight title — winning a scintillating majority decision over the previously unbeaten and future world champion Gary Russell Jr. on June 21, 2014. It remains the only blemish on Russell’s record. It was Lomachenko’s third professional bout, tying him with Thailand’s Saensak Muangsurin for fewest fights to win a world title. Muangsurin won a junior welterweight title in 1975, also in his third professional fight. Lomachenko successfully defend that title three times during his reign before vacating it to challenge Martinez in 2016. The greatest amateur boxer of his era and arguably of all time, Lomachenko first gained international renown by winning gold medals in the 2008 Beijing Olympics and the 2012 London Games as a featherweight and a lightweight, respectively. He retired from the amateurs with a 396-1 record.

Rigondeaux (17-0, 11 KOs), of Miami, Florida, one of boxing’s long-time elite, has reigned as world champion for seven years. He returns to the ring with three of his last four victories coming by way of knockout. A career highlight was when he unified the WBA and WBO 122-pound titles by defeating 2012 Fighter of the Year Nonito Donaire on April 13, 2013 at a sold-out Radio City Music Hall in New York. Rigondeaux thoroughly dominated Donaire via a unanimous decision victory, ending the Filipino Flash’s 12-year, 30-bout winning streak, as well as claiming his WBO junior featherweight title. Rigondeaux had a stellar amateur career, winning Olympic gold medals in 2004 and 2000, World Amateur Championship titles in 2005 and 2001, and Pan American Games gold medals in 2005 and 2003, all at 119 pounds, before leaving Cuba to embark on a professional career which began in Miami in 2009. In only his seventh professional fight where both fighters scored knockdowns, Rigondeaux captured the WBA interim super bantamweight title, winning a tough split decision over the vastly more experienced former world champion Ricardo Cordoba in 2010. After successfully defending the interim title in 2011 with a first-round knockout of previously undefeated former European super bantamweight champion Willie Casey, Rigondeaux won the WBA world super bantamweight championship with a sixth-round knockout of previously undefeated defending champion Rico Ramos, January 20, 2012. Rigondeaux successfully defended that title twice in 2012, blasting out once-beaten Teon Kennedy in the fifth round, which included Kennedy suffering five knockdowns en route to the loss, and winning a dominant unanimous decision over once-beaten contender Roberto Marroquin. After besting Donaire in their April 2013 title unification fight, he successfully defended the unified title three times via a unanimous decision against former two-time world champion Joseph Agbeko in 2013 and with knockout victories of Sod Looknongtantoy and Hisashi Amagasa in 2014. His reign as WBA super bantamweight champion has extended through this year, with a second-round stoppage of James Dickens last year and a no-contest against Moises Flores on June 17.