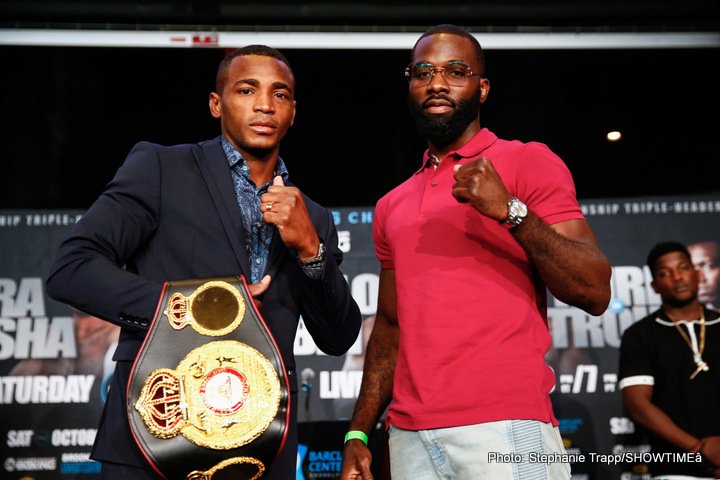 Here is how the fighters see the other the action going this Saturday night in Brooklyn:

“Charlo vs. Lubin is really a great title fight between two tremendous fighters. Charlo is going to have his hands full with Lubin. I think Jermell is going to come out on top with a close, split-decision win.

“Austin Trout is a great fighter, but I think that Jarrett Hurd is too young and too strong for him. That’s going to be another going to be a good fight but I’m picking Hurd by a unanimous decision.”

“It’s really hard for me to predict these fights. All six of us are going to leave everything in the ring to seize this opportunity. May the best man win.

“No matter who wins this fight, I want the other winners next. I’m extremely confident and my goal is to prove I’m the best in this division. That means I’m going to have to go through whoever else wins on this night.”

“Experience is going to be the key on October 14. The fighters who use their experiences to their advantage will prevail.

“If Jarrett Hurd gets by Austin Trout, I definitely would fight him next. Unification is on my mind and I think that would be a fight a lot of people would want to see. We’ll see who is able to come out on top when we’re all in the ring.”

“I really think Hurd vs. Trout is a 50-50 fight. If Trout can box for 12-rounds and not get tired the way Tony Harrison did, I think he’ll win the fight. But if he slows down in the later rounds, I think Hurd will probably take over and stop him.

“I’m expecting Lara to get the win. No disrespect to Gausha, I know he’s going to come hungry and try to take the title. But the skills and experience of Lara I think will make the difference.”

“Gausha is going to have to keep a high pace and stay in Lara’s face all night, because you know that Lara is going to use the ring. In the end I think Lara is just on a different level than what Gausha has faced. I think Lara will win by decision.

“Charlo vs. Lubin is really a 50-50 fight. Lubin is the faster and sharper fighter, but Charlo is more mature. I would have to lean towards Charlo on this one because he’s been on this stage and been in title fights before. We don’t really know what Lubin can do yet so I give Charlo the slight edge but it’s really close.”

“This is really a great night of guys putting it all on the line in tough fights. I’m expecting these to be hard-fought and close bouts. You really can’t know who the winner is until the fight starts, so I think it’ll be exciting for the fans.

“My focus is full on Jarrett Hurd. Boxing has tried to write me off but I’m not going anywhere. I’m a true warrior. I’m ready and if I can get that belt, I’m ready to face any of the other winners as soon as possible to prove that I’m the best.”