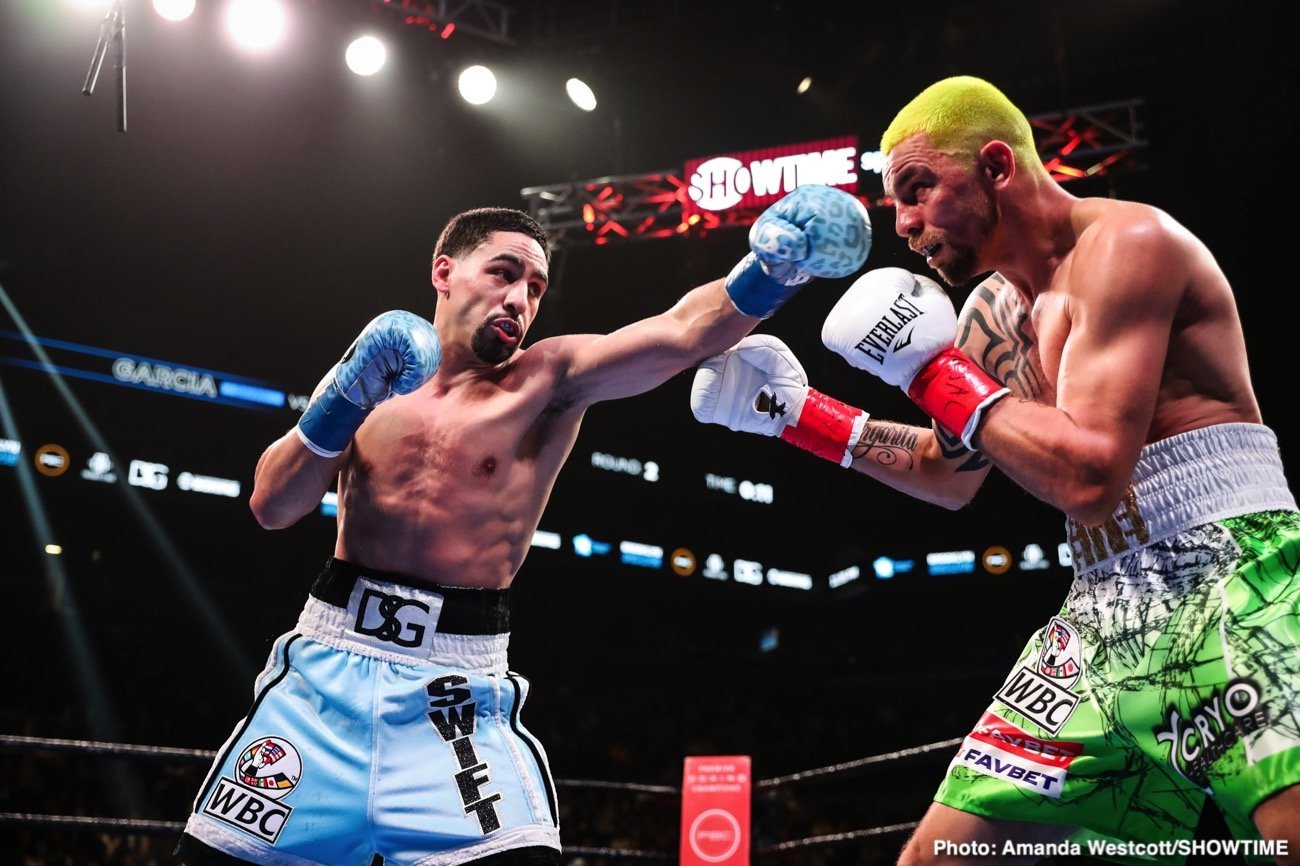 Danny “Swift” García (36-2, 21 KOs) was surprisingly taken the 12 round distance by the game but limited Ivan “El Terrible” Redkach (23-5-1, 18 KOs) in beating the Ukranian by a 12 round unanimous decision in a World Boxing Council welterweight title eliminator on Saturday night at the Barclays Center in Brooklyn, New York.

Redkach’s face was reddened badly from the many shots that he absorbed in this one-sided fight. Perhaps out of frustration, Redkach bit Garcia on the neck in the 8th.

The scores were 118-110, 117-111, 117-111. You can argue that Redkach maybe deserved one round, but you could also say he lost all 12 rounds. Of course, none of this was unexpected. Garcia’s management picked Redkach out for the simple reason that he can’t punch, and wouldn’t present a threat to beating him.

Garcia is now the WBC mandatory for welterweight champion Errol Spence Jr. However, what we saw tonight of Garcia, he won’t do well against Errol. The fight that Danny likely prefers is against Manny Pacquiao. However, Mikey Garcia has a good shot at getting the fight against Manny, as long as he beats Jessie Vargas next month in their fight on February 29.

Danny has got a good chance of getting Pacquiao or Spence. If he Garcia doesn’t get either of those fights, then look for him to find another stay busy fight against someone with similar talent as Redkach. Garcia is just looking for the big money fights, and he’ll stay busy in tune-up against lower level fighters until he gets one of the names to fight him.

He’s clearly not one of the best 147-pounders, which makes it odd that Garcia is saying he wants to move up to 154 after he fights for a world title one more time at 147. Garcia believes that guys like Spence, Pacquiao, Shawn Porter and Keith Thurman will come up to 154 to fight him, and he could be right.

Jarrett Hurd (25-1, 16 KOs) looked good in walking down Francisco “Chia” Santana (25-9-1, 12 KOs) in beating him by a 10 round unanimous decision in the co-feature bout on the card. hurd knocked Santana down in the 10th. That was the big excitement on the night in this fight.

The scores were 97-92, 99-90, 99-90 win. The former IBF/WBA junior middleweight world champion Hurd used his hulking size advantage to pound Santana in working him over to win a wide decision.

The fight wasn’t thrilling to watch, as Hurd played it safe, and didn’t fight with the same aggression that we’d seen from him in the past. You can’t blame Hurd for not wanting to slug with Santana, because he’s taken vicious punishment in his fights against these guys:

“We came out here and did what we wanted to do,” said Hurd. “The crowd didn’t love it, but you gotta understand, I got the unanimous decision and I did what I wanted to do.”