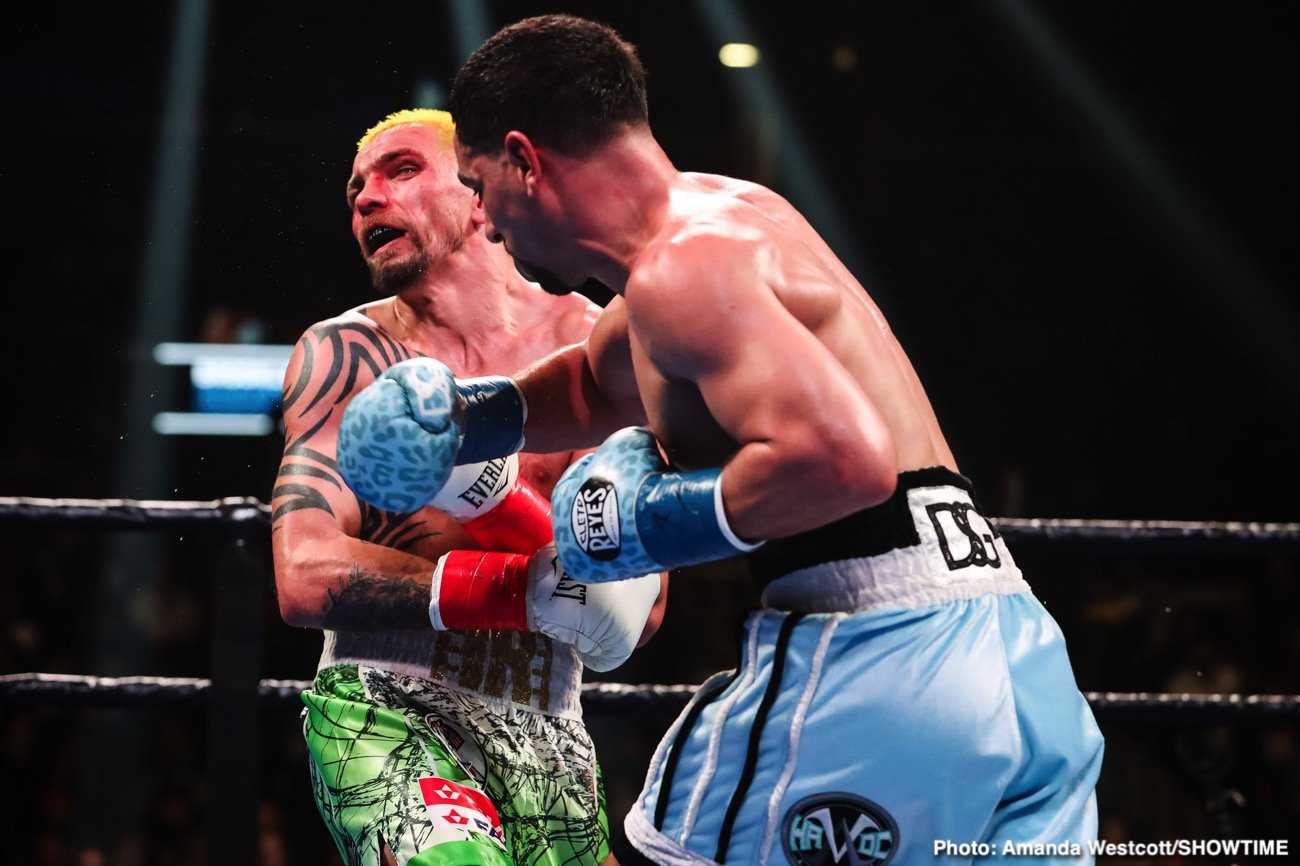 “I want to thank team Garcia and all my fans in Brooklyn who came out to see me fight,” said Garcia, after he was announced as the winner.

Garcia (36-2, 21 KOs) was sharp from the outset, finding a place for his right hand against the aggressive southpaw Redkach (23-5-1, 18 KOs). Garcia kept Redkach weary of his offense by punctuating his combinations with his signature left hook.

Redkach’s offense was centered around landing a straight left hand to the midsection of Garcia, which he was able to place effectively at times. As the fight wore on, Garcia found more holes in Redkach’s defense, stumbling Redkach with a left hook early in round four, and battering him with straight right hands late in round five.

Garcia continued his dominance in the seventh round, landing numerous power punches that caused blood to trickle from Redkach’s left eye. Garcia’s dominance continued to the final round, ending with advantages across the board according to CompuBox. Garcia landed 51% of his power punches, held Redkach to just 88 punches landed and out landed Redkach by over 100 punches.

“I thought the referee was going to stop it because I felt like I was punishing him,” said Garcia. “He’s a tough guy, he hung in there, I wanted to get the KO, but I didn’t get it. I feel like I boxed smart, and I feel like that’s what I needed after this layoff. I really wanted the knockout bad, but I’ll accept this.

“I’m not going to lie, I felt good, but I didn’t feel my best. I did lose a lot of weight for this fight, so maybe that played a factor. From a long layoff, and just losing so much weight. I lost about 25 pounds in eight weeks.”

“I promised myself that I’m going to stay in the gym now and stay in shape,” said Garcia. “I felt regular, but then when I got on the scale a few weeks ago, I was like ‘woah.’ So maybe that played a factor, maybe it didn’t. I make no excuses. I didn’t feel my best, but I felt good.”

“This was very good experience for me,” said Redkach. “He never had me hurt and I was able to learn a lot. I’m thankful to be in this position that my team put me in and I’m going to keep growing from here. I’m going to get back in the gym and get stronger and better. I’m thankful for the experience against Danny Garcia. I’m going to be back and be much better.”

After the fight, Garcia set his sights on the elite fighters in the welterweight division, including unified champion Errol Spence Jr. and WBA champion Manny Pacquiao.

“Either or (Spence or Pacquiao),” said Garcia. “Either of those fights I would like to have. My style looks great against both fighters.”

Fulton established his jab as his best weapon from the opening frame, snapping his left hand at Khegai consistently to force his hard charging opponent to hesitate on his way in. Fulton landed 25% of his jabs, connecting on 83, compared to Khegai’s 28.

“That’s what I do,” said Fulton. “I use my jab. I tried to utilize the jab all night and win the fight behind the jab. I showed that I’m ready for a world title next.”

Khegai looked to throw power shots early and often, targeting the body and trying to finish his combos with a left hook. While he was able to force Fulton to retreat to the corner often, he was unable to take advantage, as Fulton was able to hold strategically and slow Khegai’s offense.

As the fight went on, Fulton increased his activity, mixing in lead left hooks and body shots to make Khegai hesitate further. Khegai’s frustration appeared to grow as the fight went on, as his output decreased from chasing Fulton around the ring. While Khegai was the more active puncher over 12 rounds, throwing 649 to Fulton’s 535, Fulton landed 182 punches compared to 123 from Khegai.

“I felt great against a tough opponent,” said Fulton. “I stayed on my boxing, kept him off his game and pulled a victory out. I knew he was a rough and tumble customer, so I just had to keep my composure.”

While Khegai landed some powerful shots in the championship rounds, Fulton was too elusive and was never hurt by Khegai, on his way to earning the victory by scores of 116-112 and 117-111 twice.

“It feels good to get this win,” said Fulton. “We’ve been through tough times and fought tough opponents. I’m proud of my team for staying together. We’re Philly strong. I want that world title. I’m going to train even harder for my next performance so if I have to dog out it out even more, I’ll be ready.”

Prior to the main card, SHOWTIME CHAMPIONSHIP BOXING COUNTDOWN streamed live on the SHOWTIME Sports YouTube channel and SHOWTIME Boxing Facebook page and saw District Heights, Maryland based prospect Keeshawn Williams (19-0, 9 KOs) earn a hard fought unanimous decision over Japan’s Gaku Takahashi (16-11-1, 8 KOs) in their eight round welterweight affair. Williams, who is trained by Barry Hunter, triumphed on all three cards, by scores of 80-72, 79-73 and 78-74.