Heavyweight world champion Deontay Wilder and unbeaten contender Luis Ortiz participated in an open to the public media workout Wednesday as they near their main event showdown this Saturday, March 3 live on SHOWTIME from Barclays Center, the home of BROOKLYN BOXING™, and presented by Premier Boxing Champions.

Also participating in Wednesday’s workout and opening the SHOWTIME CHAMPIONSHIP BOXING telecast at 9 p.m. ET/6 p.m. PT were super middleweight contenders Andre Dirrell and Jose Uzcategui, who meet in a rematch for an interim 168-pound world title in the co-feature.

Undercard fighters participating in Wednesday’s workout were Long Island’s Alicia Napoleon, who fights for a women’s super middleweight world title on Saturday night, and Brooklyn’s Richardson Hitchins, who enters the ring for a welterweight fight.

Wilder was joined for his portion of the workout by “The Young Jamaican Trainer” Demarjay Smith, known for his motivational Instagram videos and appearances on “The Ellen Degeneres Show”. Smith had some words of inspiration for Wilder before he began his workout.

“You are the real deal,” said Smith. “You are strength no weakness. You are the shark of the ocean. You believed every day, you achieved and you became it.”

The event also featured unbeaten star Marcus Browne from Staten Island, who gave a boxing tutorial for local children from Gleason’s Give a Kid a Dream, BOXER Inc., Children of Promise and the Atlas Cops and Kids Foundation.

Here is what the fighters had to say Wednesday from Barclays Center: 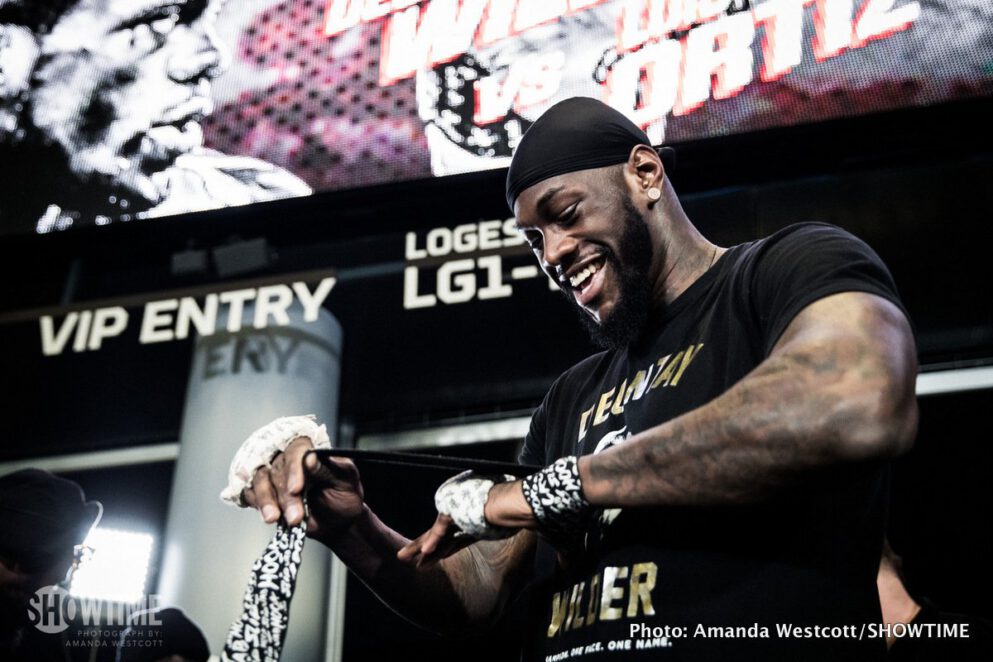 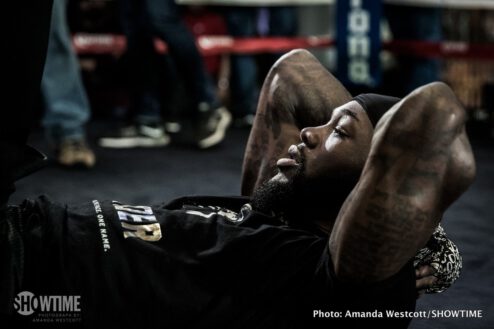 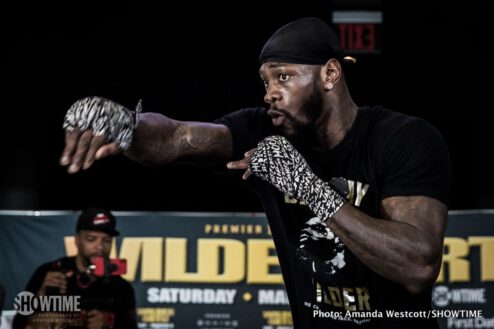 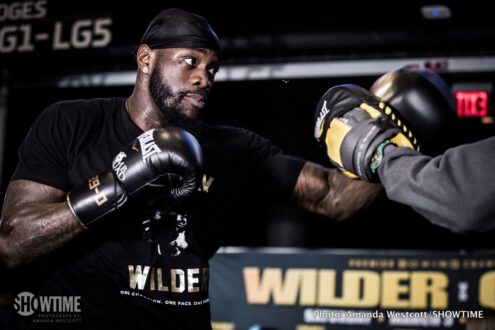 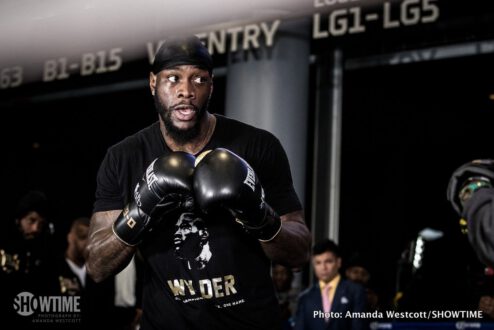 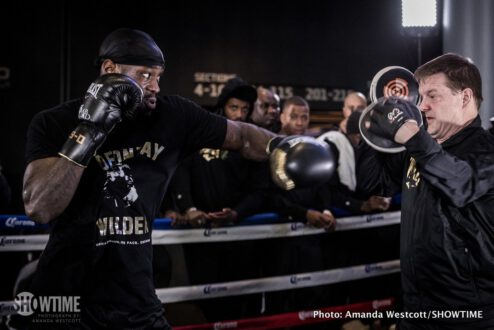 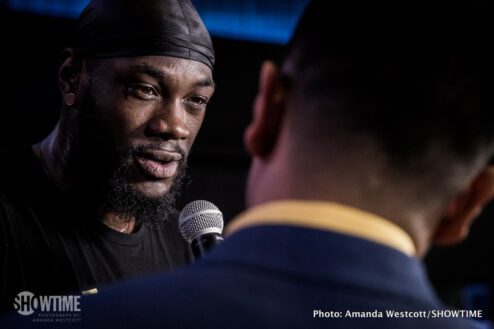 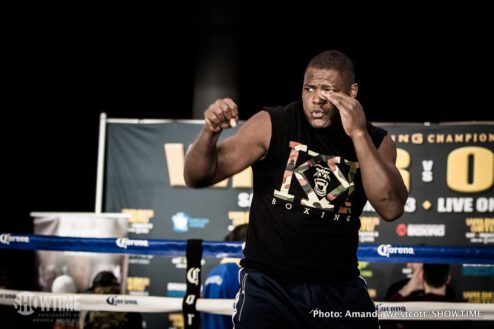 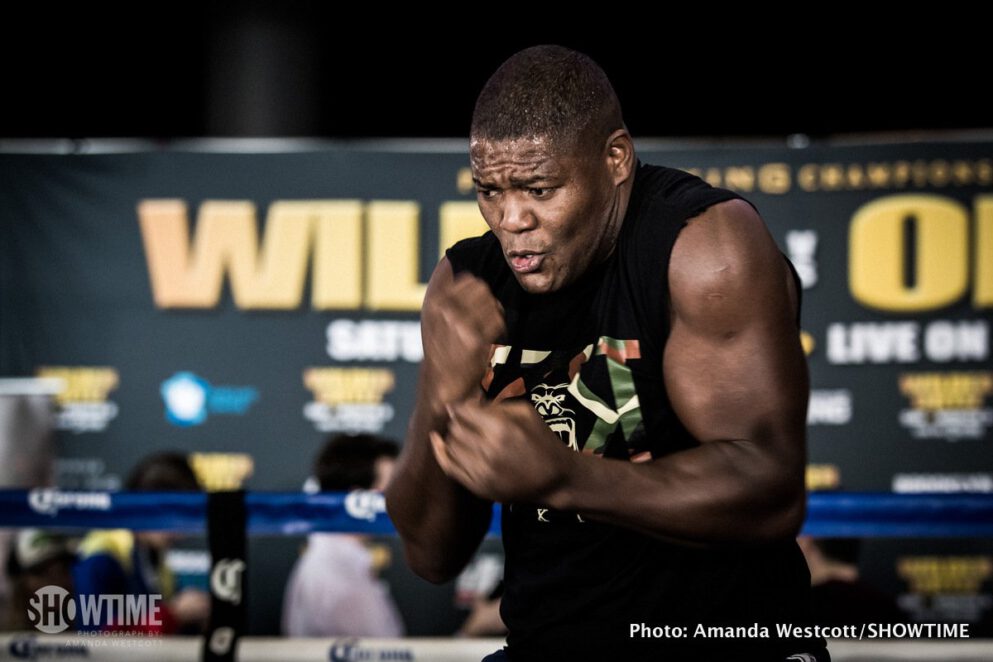 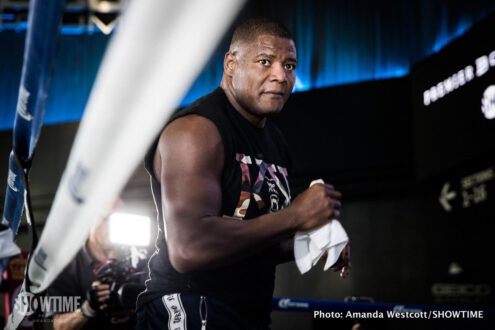 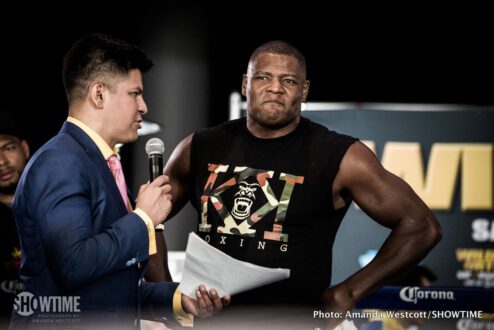 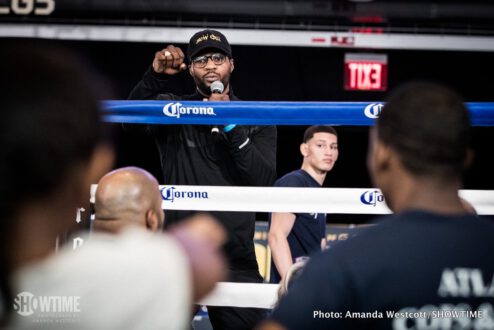 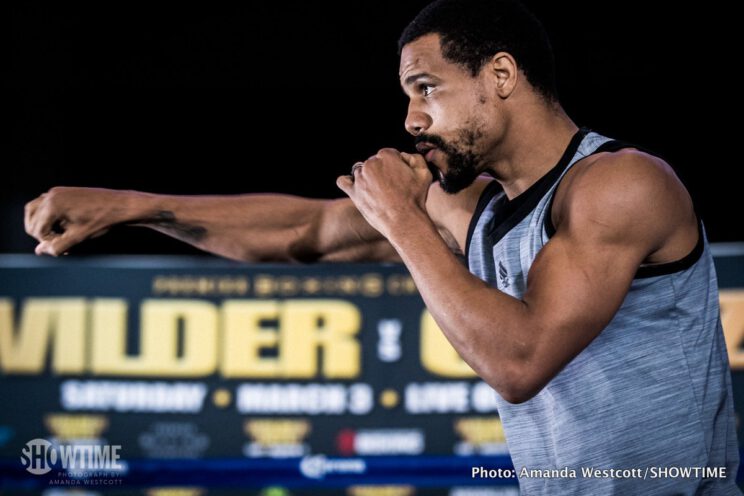 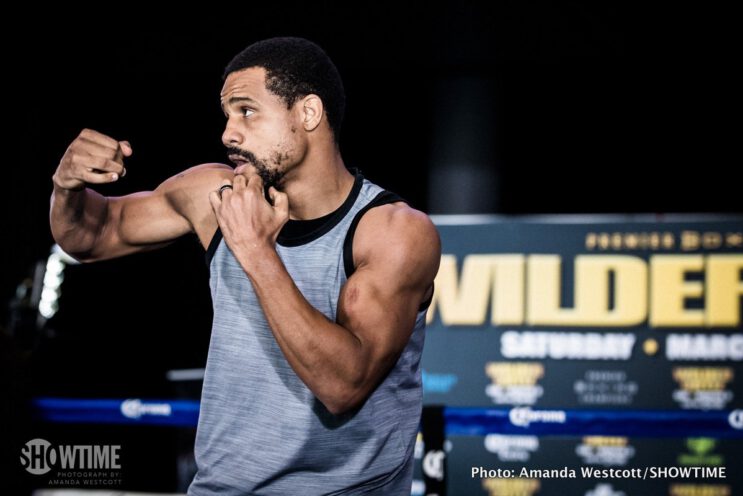 “I’ve prepared myself for this moment for a long time now. I’m going to prove it to the world that I’m the best. That’s why I gave this opportunity to Ortiz again. He says he’s the ‘Real King Kong’, but ‘King Kong’ knows what happens when he comes to New York.

“I am the best in the world. I’ve been saying it for years. Here is a big test. This is the fight that the fans have been waiting for. I’m going to pass this test with flying colors.

“I don’t have any worries about Ortiz at all. When I look at Ortiz, he doesn’t look powerful. I know he has nice skills like all Cuban fighters. That’s nothing to me. It’s going to be up to him to prove me wrong.

Read:  Where Does Fury vs Wilder 3 Rank Amongst The Greatest Heavyweight Battles?

“This is the fight game and everybody knows that you need to have confidence to be in it. I’ve had to fight all of my life because people said I wouldn’t amount to anything. Here I am standing tall, because of that confidence I have in myself and my abilities. I don’t believe any man can beat me.

“When I think about Luis Ortiz, I see threes. It’s a magical number. I see a third round knockout. I’ve done what I’ve said so far, and I haven’t let anybody down. I will knock him out and then I will unify the division. I’m on a mission. There will be one champion, one face and one name. Deontay Wilder.”

“I’m psyched and I’m ready for Saturday night. I have no worries at all about being the underdog. I will knock Deontay Wilder out.

“I’m anxious. I’m ready to get in the ring. It’s been a long wait but it is almost time to fight and I just can’t wait.

“I’m here for my world title. I’m here to win the heavyweight championship of the world. Winning the belt is the only thing on my mind.

“It’s going to be big for me to get this win on Saturday for myself and for Cuban boxing. This is what makes me happy and gives me thrills. It will all be worth it on Saturday night.

“I am the champ. Saturday night, I show everyone why.”

“What happened last fight is in the past. I’m ready to move forward with Virgil Hunter and get this win on Saturday night. Virgil is a tough coach who gives you exactly what you need in the gym.

“Efficiency has been our thing throughout camp. If I execute on fight night, I’ll walk out of there with the victory I’ve been working for.

“He’s a tough fighter but at the end of the day he’s there for me. It’s all about my execution so I just need to be as sharp as possible on Saturday.

“I was a B- last fight at best. I was really closer to a C+. I was starting to come on later in the fight. I’ve watched the fight a million times and I know what I need to do to improve on the performance.

“I’ve worked hard enough box at my best for 12 or more rounds if I needed to. I’ve been through a lot and I believe we’re going to steal the show and be the fight of the night on Saturday.

“My biggest improvements have been mental. Virgil Hunter is a coach who really helps you with that side of the sport. He always stayed on me to make sure I’m ready and focused on the task at hand.

“I’m very excited for this fight. Everyone knows it’s going to be a great fight. I know this won’t be easy and I’ve never wanted it easy. We’re going to put on a great show.”

“I’m very focused on this rematch and thankful to be in this position. I thought that the win was taken from me the first time, but now is the time to move forward and get the victory on Saturday night.

“This time I really want to prove my skills and show off my power. Andre Dirrell better be ready because I’m coming to knock him out.

“This time I feel faster, stronger and ready to make this outcome more decisive and more clear in my favor. I have everything it takes.

“I’m not going to give the judges any opportunity in this fight. They won’t have an impact on this fight whatsoever because I’m going to knock him out earlier rather than later.

“The only thing that matters to me is having Andre Dirrell in front of me on Saturday night and knocking him out to prove I’m the better man.

“Last time I threw a combination and everyone saw it was before the bell. I’ll just have to go prove it again on Saturday.

“I’m in the best shape possible right now. I’m happy to be here doing what I love. There have been no struggled in camp and I can’t wait for Saturday.”

“I’m grateful to have this opportunity fighting on this big card. It’s amazing to have this new challenge in my professional career. I’m going to set the tone Saturday night.

“I’m a big believer in making dreams come true and doing whatever it takes to get to the top. I have a great team that I’m so grateful for and they’ve elevated my skill to get to this level.

“At the end of the day I have to be the best that I can be. Camp was gruesome. It was a lot of hard work. I’m going to be ready for anyone on Saturday night.

“I’m definitely ready to fight Claressa Shields. That’s something I want. She’s not the only fighter with skills, there are a lot of us out there and it takes all of us to create an empire for women’s boxing.

“I’m ready for whatever my opponent has. She has a respectable record but no matter what, I’m going to prepare myself to be at my very best on fight night.”

“I expect my opponent to be real aggressive. I definitely hope he comes to fight and give the fans a good show. I haven’t studied him too much but I’ll be ready for anything he brings.

“I’m going to show all of the improvements that I’ve made in the gym. I’m becoming more of a professional fighter. I’m going to be sharper, smarter and more patient than I have in the past.

“This is another day in the office for me. I’m ready to go out there and perform and give my hometown fans the show they deserve.

“It feels good to be on a great card like this that’s really meaningful for the sport. I can’t wait to go in and do my thing then watch Deontay and Luis on Saturday.”

WBC HEAVYWEIGHT WORLD CHAMPIONSHIP
March 3, 2018 / Brooklyn, New York / Barclays Center
This will be the 1,997th world championship fight sanctioned by the WBC in its 55-year history.

23 heavyweight world champions have been recognized by the WBC, of whom five have regained the title: Muhammad Ali (US), Mike Tyson (US), Lennox Lewis two times (GB), Hasim Rahman (US), Vitali Klitschko (Ukraine).

142 heavyweight world championship fights have been held in WBC history.