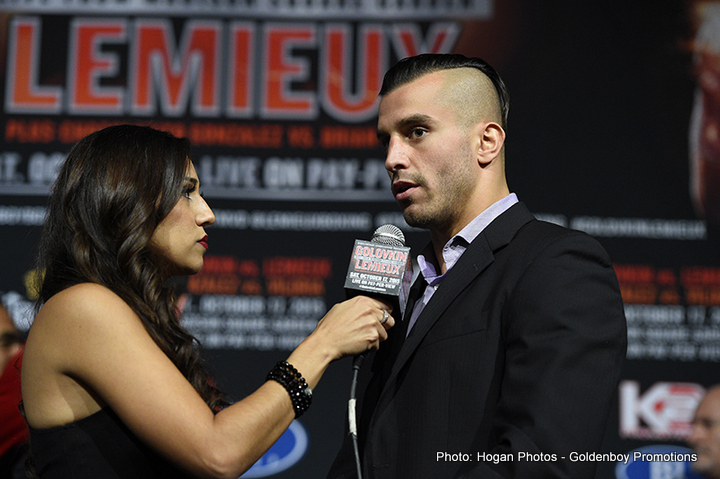 LOS ANGELES (March 21, 2016) – Before WBC, Ring Magazine and Lineal Middleweight World Champion, Canelo Alvarez (46-1-1, 32 KOs) and former two-time world champion Amir “King” Khan (31-3, 19 KOs) step into the ring at the new T-Mobile Arena in Las Vegas on Saturday, May 7 for the biggest fight of 2016 thus far, three hard-hitting bouts have been confirmed to get fight fans ready for the main event.

Canada’s biggest boxing star and former IBF Middleweight World Champion David Lemieux (34-3, 31 KOs) will be looking to make an impression and use his power against the swift contender from Passaic, New Jersey, Glen “Jersey Boy” Tapia (23-2, 15 KOs) in a 10-round middleweight co-main event.

The live mega event, which matches some of boxing’s most popular and recognizable fighters against each other in exciting matchups will be produced and distributed by HBO Pay-Per-View beginning at 9:00 p.m. ET/6:00 p.m. PT.

“I am back,” said David Lemieux. “I am coming back strong and ready to be on top of the middleweight division where I belong.”

“This is a make or break moment,” said Glen Tapia. “I can’t wait to show everyone what I am made of. People will see a new and improved Glen Tapia and this is the best place to show it; as part of a stellar undercard. I know David will be a tough opponent, but I am ready for this challenge to take on the best in the division and show the world a fully realized Glen Tapia.”

“We want to give back to the fans with this undercard and provide thrilling, action-packed bouts leading up to the main event with Canelo Alvarez vs. Amir Khan on May 7,” said Oscar De La Hoya. “We appreciate the fans support and wanted to give them the best bang for their buck with these televised undercard fights. To watch exciting, competitive undercard bouts leading up to the biggest boxing event so far of 2016 will help to create buzz by the time Canelo and Amir reach the ring and fans pay to feel a part of that electric atmosphere.”

“I am extremely happy for David to be on such a high profile card as the co-main event to Canelo Alvarez vs. Amir Khan,” said Camille Estephan, President of Eye of the Tiger Management. “David is motivated, now more than ever, to reconquer his status as a world champion and winning this fight will get him closer to his goal. I am confident David will put on a fight to remember on May 7.”

“This is a great opportunity for Glen, he knows he has to be at his best against a warrior like Lemeuix,” said Pat Lynch, Manager to Glen Tapia. “I know he is up for the challenge and will give everyone Mat 7a great fight to remember.”

“May 7 is the day I have to slaughter another young lion to prove myself again,” said Mauricio Herrera. “Frankie Gomez is a strong fighter that will bring the absolute best out of me. I will be in tip top shape for the mega-event.”

“This is the kind of fight I have been training for my entire career,” said Frankie Gomez. “Herrera is a recognized and ranked fighter, he has a lot of experience and it’s my chance to prove myself and show everyone who has doubted me, what I can do in the ring. I feel very excited to be part of a great undercard, fans can expect an exciting night, don’t miss it.”

“I am excited to be part of one of the biggest boxing events of the year,” said Patrick Teixeira. “I promise to go out to the ring fully prepared for the best Curtis Stevens and show that I am a fighter to be feared in the middleweight division. I want to thank my team and Golden Boy Promotions for this opportunity, and on May 7 fans can expected to see an exciting fight opening the televised event.”

“This guy is a zero and has got to go,” said Curtis Stevens. “I’m ready to start climbing up in the rankings again and am happy to be on this great HBO card with my man Canelo Alvarez.”

“This is a great crossroads match up for Curtis on a big platform,” said Kathy Duva, CEO of Main Events. “He needs to deliver on May 7th and I know he will!”

Currently ranked as one of the top middleweight fighters by the WBC and IBF, former IBF World Middleweight Champion David Lemieux is making his return to the ring on May 7 after a sell-out crowd at The Mecca of Boxing, Madison Square Garden in New York, when he faced Gennady Golovkin for the Unified Middleweight World Championship on October 17. Before his face off against Golovkin, Lemieux was coming off of his ninth consecutive victory over Hassan N’Dam in June 2015 and seventh consecutive knockout against Gabriel “King” Rosado last December 2014. The 27-year-old Lemieux was victorious in dominant fashion capturing the vacant IBF Middleweight Title against Hassan N’Dam on June 20 in his hometown of Montreal, Canada. Dropping N’Dam four times, the hard-hitting Canadian won a wide, 12-round unanimous decision. Lemieux made his HBO and United States debut in headline fashion with a fantastic performance stopping top contender Gabriel Rosado in the tenth round on December, 2014 in Brooklyn, New York. Now, Lemieux is ready to fight Glen Tapia in a memorable mega event in Las Vegas.

Known as one of the most exciting fighters to watch in the sport, Glen “Jersey Boy” Tapia will be looking for an opportunity to start off 2016 with a victory when he faces power-puncher David Lemieux on May 7. A professional since 2008, the 26-year-old is a tough fighter who has taken on some of the fiercest opposition in the sport, including match-ups against James “Mandingo Warrior” Kirkland, Daniel “The Rock” Dawson, and Michel Soro. One of the most decorated amateur fighters of his time, Tapia has competed for the NABO and USBA super welterweight titles. Now, Tapia has set his sights on becoming a world champion as he prepares for his fight on May 7.

Fan favorite Mauricio “El Maestro” Herrera has established his reputation over the years with an old school approach that has seen him show off the technical aspects of the sweet science like few others. Throw in a warrior’s heart and the 35-year-old from Riverside, California is a must-see for all followers of the sport. Owner of wins over former world champions Ruslan “The Siberian Rocky” Provodnikov, Johan “El Terrible” Perez and, most recently, “Hammerin” Hank Lundy, Herrera’s only defeats over the last two years have been controversial decision losses to current world champions Danny “Swift” Garcia and Jose Benavidez. Now moving up to 147 pounds, he expects to be better than ever.

East LA’s Frankie “Pitbull” Gomez is known for his exciting style and powerful punches. He is the owner of 13 knockouts in three rounds or fewer and can also box, as shown in his near-shutout victories over longtime contenders Vernon “Ice Man” Paris in July of 2014 and Jorge “Pantera” Silva in October of 2015. A decorated amateur who won the 2009 United States Championship and earned a Silver medal in the 2009 World Championships, Gomez is ready to face the top opposition and chase his dreams of a world championship in 2016.

From Sombrio, Santa Catarina, Brazil and residing in Sao Paulo, southpaw Patrick Teixeira has paid his dues on the way up the middleweight ladder and after putting together a perfect record, the Brazilian star will take on his biggest test to date in former world title challenger Curtis “Showtime” Stevens. An active fighter who has competed around the world since turning professional in 2009, the 25-year-old will make his Las Vegas debut this May after scoring big knockout wins over Patrick Allotey and Don Mouton in 2015.

One of the most exciting knockout artists in boxing, Curtis “Showtime” Stevens hails from the same Brownsville, Brooklyn neighborhood that produced the legendary Mike Tyson, and Stevens, like “Iron Mike,” enjoys nothing more than a fast finish on fight night. Winner of two of his last three, with knockouts of Patrick “The Machine” Majewski and current number one IBF Middleweight contender Tureano Johnson, the 31-year-old former NABF middleweight champ can make his case for another world title shot with a win over Teixeira on May 7.