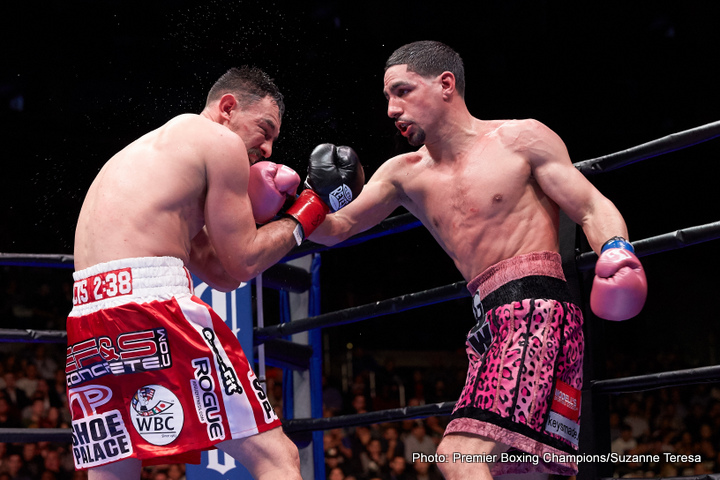 David G. (Albany, NY): How do you rate Danny Garcia overall at this stage in his career?

Vivek W. (B247): I think the career of Danny Garcia leaves room for both, great praise, and great criticism. More often than not, I’ve been openly critical of him, for the simple fact that I think his stock has dropped tremendously after the Matthysse bout due to uneven performances and poor choice of opponents. That said, I think he’s right on par for where he needs to be at this stage in his career. On 32 nights spanning 9 years, he has faced a variety of opposition and found a way to win, even if some weren’t as pretty as most would like.

I think for me personally, the thing that I dislike the most is his choice of opponents; along with the fact that he was once in position to really elevate to a different level but he stalled. That stall has created a reverse momentum that has in turn created heavy criticism. When you compare the careers of Garcia and Miguel Cotto, they’re actually more similar than many think. The key difference is that Garcia decided to take a detour at a point in which Cotto decided to rise up! Consider this:

They both started facing (what I refer to as) ‘path prospects’ during approximately the same time of their respective careers. ‘Path Prospects’ are opponents designed to give a rising fighter solid rounds, yet in the mind of a matchmaker, also men that they’re supposed to be able to defeat at that given stage en route to a signature victory. In the case of Cotto, slightly beyond his 20th bout, he faced the rugged, powerful Randall Bailey. At the same point in his career, Garcia was tasked with overcoming an also rugged and powerful Nate Campbell. Cotto would follow the Bailey victory by facing the likes of ‘Chop Chop’ Corely, Torres, Malignaggi, and Quintana, which setup the true test in Mosley.

Garcia would follow up the Campbell bout with Kendall Holt, Morales (twice), Amir Khan, Zab Judah, and Lucas Matthysse. Garcia’s string of opponents after his initial ‘path prospect’ was in many ways comparable to the men Cotto faced during that stretch. What separated the two is that after Cotto faced those ‘path prospects’, he took the signature victory bout in facing Shane Mosley. After that signature victory, he was certified elite status from there on out. In the case of Garcia, the closest thing he has to a signature victory was a guy we’ve learned isn’t as good as initially advertised (Matthysse). He followed that bout with a string of uneven performances against men that aren’t quite elite level.

There’s no denying Garcia’s ability. Whatever doubt one has in his ability was hopefully put to rest down the stretch of the Guerrero fight when he landed shots at will, and took the fight to the rugged warrior. The task for Garcia is to perform at that level, and not a notch below for three minutes of every fight and every round. Right now, his inability to do that is the only thing separates him from the next level. History has seen many men become arrested developments at this very stage. What Garcia does next will tell us where history ultimately places him. Stay tuned.

Jeff H. (Atlanta, GA): Now that Thurman vs Porter is officially signed, can you give us your thoughts on how you see that one playing out when it happens in March?

Vivek W. (B247): Personally, I think the fight is a total toss up. I can see paths to victory for both men. I’m not a betting man, but even if I were, this is just not the fight I’d consider putting money on. I think the power, aggression, and reckless style of Porter make him very dangerous. He’s a tough fighter who we know can get up off the deck and make you sweat! So, a few powershots from Thurman won’t be enough, which makes me question whether or not this could be the bout that it all goes wrong for him. The flipside of that angle is the fact that Thurman is the better, more composed boxer. A few new wrinkles and improvement on those of the past could be enough to get it done.

I really see this as a 50/50 fight. I don’t think there’s any more pressure on one man over the other. If anything, maybe Thurman feels the pressure a bit more as a result of him still being undefeated. But once the bell rings, I just see a very even fight all the way around. Although I think Thurman is the more polished fighter, I’d be the first to say that we’ve never really seen him buzzed or hurt to the point of being dropped. If Porter muscles him around and hurts him, unlike the one or two times Thurman was hurt before, Porter is strong enough to finish him.

Thurman is the bona fide power puncher here, but if anyone gets stopped, I’d put my money on Porter stopping Thurman. I really think the difference in the fight will be intense body work. Thurman doesn’t take it well to the body, and once Porter lands there, Thurman will have his hands dropped just enough to be caught up high. I love this fight for both men at this stage in their careers. But if I just had to make a pick, right now, I’d have to go Porter by a slight edge.

Mark B. (Lake Mary, FL): Do you think Floyd Mayweather and Manny Pacquiao are truly done at this stage? I have a hard time believing it and I’m curious to here you weigh in on the subject.

Vivek W. (B247): My money says neither man is truly done. As I look at the recent wave of interviews and media play from Mayweather, this string of events is an absolute parallel to what we’ve always seen. Over the past couple years Mayweather has taken his victory tour after a September clash, stayed away from the media during most of that time, and suddenly resurfaced closer to Super Bowl Sunday, right when it’s time to generate new buzz for a Spring showdown. The recent interviews about race and politics, as well as the recent showing at the Garcia/Guerrero fight were all by design. I think we definitely see the ‘Money’ man bless the new T-Mobile Arena sometime this spring.

Few even know, but MGM/AEG will open the state-of-the-art arena in roughly 70 days from now (April). A ton of acts are already booked to showcase their talents. Although Janet Jackson will hold court on May 14th, Mayweather’s patented Cinco de Mayo weekend remains closed as an option to potential suitors, yet circled on the calendar. This can only mean one thing! Nothing is guaranteed, but here’s something to chew on: The number “50” is set to reign supreme this year. In the NFL, we now stand roughly two weeks away from the 50th showcase of the worlds biggest stage in the world of sports.

In Las Vegas Floyd Mayweather now has his own stage set to do the unprecedented as well, by allowing Oscar and Canelo to have their wish at utilizing the Cinco de Mayo, but only as a dancing partner en route to a middleweight clash at 160. Canelo would have the option to hydrate heavier, (unlike the initial fight); Mayweather would stay true to form and enter in the low 150’s. Right up the street from the new T-Mobile Arena, legendary recording artist BoyzIIMen hold permanent residency at the Mirage Hotel. In fitting fashion, the name of one of their hit singles couldn’t be more appropriate, as come this spring, “50 Candles” will definitely burn bright!

Relative to Pacquiao’s future, a month ago he was quoted in his country as saying he could see himself fighting until the end of the year to satisfy his Top Rank contract (December 2016). Now that the Bradley fight is signed, we’re hearing him say to fans “don’t miss me, this will be the final time you see me”. I think that’s more marketing/promotional talk than anything. The Bradley fight could be as ugly as the initial two. On the strength of that alone they need to sell this one to the public to avoid another set of weak PPV numbers. Beyond this bout, I think we definitely see him at least one more time. He could actually leave. Although possible….I see it as very improbable. Stay tuned.

(Vivek “Vito” Wallace can be reached at 754.307.7747. He can also be heard on “Left Hook Lounge Radio” Wednesday nights, or followed on Twitter (@lefthooklounge1), Facebook, and InstaGram).