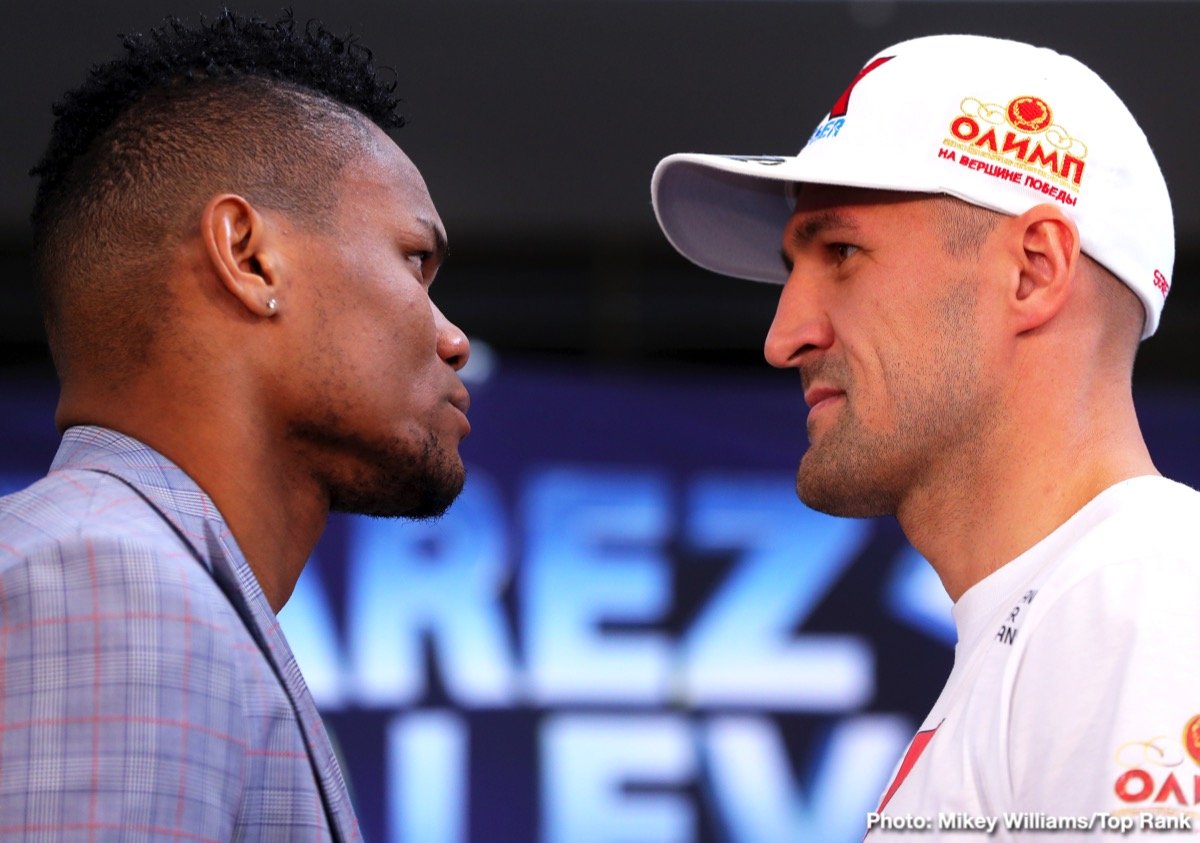 Super Saturday is almost here. Three world title fights, including one of the most anticipated rematches in recent memory, will take place Saturday at Ford Center at the Star, the practice home of the Dallas Cowboys.

At midnight ET on ESPN+, Eleider “Storm” Alvarez will attempt to repeat the deed when he defends his WBO light heavyweight world title against former two-time light heavyweight champion Sergey “Krusher” Kovalev. Back in August, Alvarez came from behind to starch Kovalev with three knockdowns in the seventh round. And, in the ESPN+ co-feature, 2018 Prospect of the Year Teofimo Lopez (11-0, 9 KOs) takes on former world title challenger Diego Magdaleno (31-2, 13 KOs) in a 10-round lightweight fight.

In the ESPN main event (10 p.m. ET), Oscar Valdez (24-0, 19 KOs) defends his WBO featherweight title for the fifth time against Carmine “Mr. Wolf” Tommasone (19-0, 5 KOs). In the ESPN co-feature, Richard Commey and Isa Chaniev will duke it out for the vacant IBF lightweight title with the winner set to fight unified champion Vasiliy Lomachenko later this year.

Here is what the fighters had to say Thursday from Ford Center at the Star.

“Things have changed a lot for me. This is my first time being a main event {defending my world title}. What has changed is my popularity, but I’m still the same guy.”

On Kovalev saying he was overtrained for the first fight

“I believe that’s a lot of excuses he’s making. When you lose, you have a lot of excuses. I had a great game plan with my team. If he says that was an accident, then he needs to get ready for another accident.” 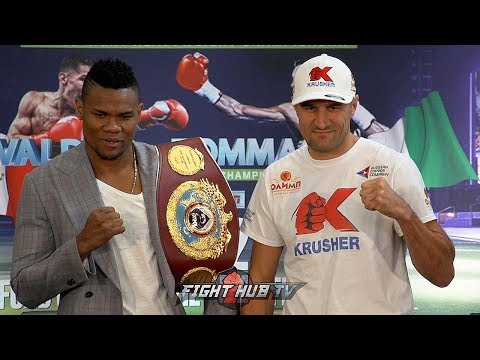 “I want to say a big thanks to Top Rank and my team at Main Events to make this rematch and get my belt back. This is the most important {fight} for me because I couldn’t stop my boxing career as a loser. It’s not in my character. First of all, this is my goal, to get back my belt that I dropped on the way to my big goals. I made a mistake last time {against Alvarez}, but this time I will fix it. This Saturday, I will fix this situation and be on top again. If not, I am not the Sergey ‘Krusher’ Kovalev. Believe me, this Saturday will be the best version of me because I turned everything on to get in the best shape of my boxing career.”

“My goal is to collect all four belts, but I dropped this belt on my way to my huge goal. After {the Alvarez loss}, a lot of people thought I should stop my boxing career. No, that’s not in my character to stop my career by losing. When I win, I will think, stop or not to stop? But when I lose, it was 100 percent no.”

“It was one of the most difficult times of my life. Having my jaw wired shut for two months was the hardest thing I’ve ever dealt with. That’s in the past now. I’m ready to focus on this fight. I’m 100 percent healed from that injury. That’s not going to bother me no more. I’m just excited to get back in the ring. It’s been almost a year since my last fight. I’ve been training hard with my new trainer, Eddy Reynoso. It’s been a great training camp, and I just can’t wait to get in there and start again where I left off.”

“We had a great training camp, me and Eddy Reynoso. I never take no fighter lightly. There was a point where no one knew who Manny Pacquiao was when he came to the United States and had his first fight. And he became a star. So, we don’t know what Tommasone can bring. I will be 100 percent ready for him, or for any fighter, because I don’t take no fighter lightly. I have the same respect for all fighters inside the ring, and I’m going to do whatever I have to do come out victorious. One thing in my mind is to not take him lightly and just try to get the job done and keep on improving my career. I’m definitely focused on this fight and start where I left off.”

“Working with a world champion and an athlete that works as hard as Oscar does is a proud moment for me to be part of that team.” 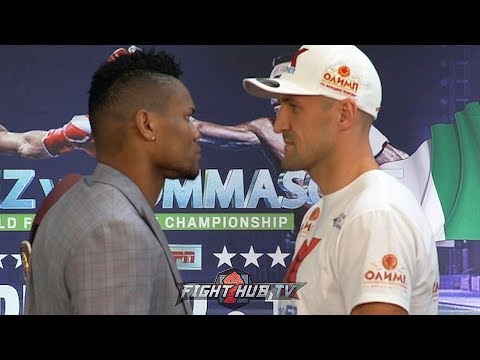 “I fought in America as an amateur. This is my first time as a professional. When I got the call {to fight Valdez}, it was like an early Christmas present because it was early December. I prepared well for this opportunity.”

“Winning a title in the United States is every boxer’s dream. It would be a great opportunity.”

On people calling this a “tune-up fight” for Valdez

“It doesn’t bother me. I’m confident in my skills, and this is an opportunity to show my skills.”

“I’m taking over the show, and it’s with all due respect to these fighters out here. What we came out to do, and what we plan to do, is take over and exceed everybody’s expectations. People are talking very highly of me, so I have to back it up. I’m used to it through my father, who is my coach, who talks very highly of me already. Come Saturday night, you will see something bigger and better. As the opponents get tougher, we’re going to get better.”

“I believe the fight with Mason Menard on Dec. 8 (a 44-second KO) proved to everyone at that point that we are contenders. To me, I already feel like I’m a world champion. To me, the only thing {missing} is a world title.”

“Top Rank, they built my whole entire career. You’ve been there to watch it. Some of the best people in boxing are with Top Rank. Brad Goodman is matchmaker of the year for a reason. I just have to use my personal experience and thank Top Rank for building me and putting me in this position. I thank you guys because everything leading up is going to win me this fight. Everything I’ve been through is gonna {help me}. Even the losses I’ve had or whatever only made me stronger. I am here with fuego, and I will bring everything I need to. I’ve been in the ring, but you haven’t been seeing me. My last two fights were in Mexico, but what you haven’t seen is who I’ve been in the ring with. Pedraza, I got him ready for Lomachenko. Linares, I got him ready for two fights.”

“It’s nothing but fire. We are ready to do this.”

“After my fight with Robert Easter Jr. (split decision loss in 2016), I felt like I won that fight. I kept working. I’ve got good management and I met {trainer} Andre {Rozier}. I feel like everything is working for me. I’ve got to do this. I kept working, and here I am today.”

On the fighting tradition of Ghana

“I am very pleased that I have a chance to showcase myself, showcase my skills here in a big arena on ESPN. I’m ready for whatever, and I am here to win.”

“I never lost a fight. The loss I have on my record, I didn’t really lose that fight. I am ready for this fight. This is the most important fight of my life. My team trusts in me, and I trust in myself. Other things don’t matter to me.”

Promoted by Top Rank, Main Events and Krusher Promotions, in association with Groupe Yvon Michel, tickets priced at $225, $165, $85, $55, and $25 (including facility fees) are on sale now and can be purchased at SeatGeek.com.