Ken Norton engaged in many big fights, he faced many big names, and of course, he was (briefly) heavyweight champion. But Norton is by far and away best known for his three closer than close battles with Muhammad Ali. Norton famously broke Ali’s jaw in fight-one, with Norton, then an almost complete unknown, rising to fame with his upset split decision win. Today marks the anniversary of the Ali-Norton rematch, this a fight that saw Norton push Ali to the wire again, this time losing a split decision himself.

Norton fought during a golden era.

It was indeed a special time for the big men of the sport when Norton was fighting; yet the level of sheer greatness that seemed to be everywhere made it tough for Norton to rise to the very top. Indeed, had Norton been fighting in any other era, chances are he would have been a long-reigning champion. As it is, Norton ruled as WBC heavyweight champion for just three months. Still, there is no doubting Norton’s brilliance, nor is there any way we can count out the immense effort “The Fighting Marine” gave during his long career.

Having served his country in the Marines, which is where the 20-something Norton began boxing, Kenny went on to win a number of amateur tournaments. Going pro in November of 1967, Norton attracted attention due to his impressively muscled physique and he soon acquired a fine, fine trainer in Eddie Futch. A sparring partner for “Smokin’ Joe,” who he said he would never fight as the two were good friends, Norton compiled an unbeaten record of 16-0, before he ran into a guy named Jose Luis Garcia.

The unknown Venezuelan ruined Norton’s perfect record, stopping The Ring Magazine Prospect of the Year via 8th round stoppage. The claim that Norton could not stand up to a big puncher would never leave him. Norton regrouped, beating 13 guys in a row, a couple of them reasonably big names (Jack O’Halloran, who like Norton, would find movie fame, and Henry Clark) – before the 29 year old Norton was given the Ali fight.

The upset Norton scored over the former heavyweight king who was campaigning for a second fight with Frazier having lost “The Fight of the Century,” was huge. “I was on cloud ten after that win,” Norton later said of the March 1973 win. “Nine wasn’t high enough.”

Norton gave Ali quite a beating, busting his jaw (Norton always insisted the injury came late on in the fight, Ali biographers say the break came as early as round two). Ali, great as he was, was unable to get to grips with Norton’s “awkward” style (Norton disliked the “awkward” term). With his cross-armed style and his excellent jab (along with Futch’s mastermind game-plan), Norton was one step ahead of Ali for almost all the 12 rounds. The fact that the fight was scored a split decision only in Norton’s favour shows how much influence the larger-than-life Ali held over the judges.

Norton pushed Ali hard in the return fight, coming close to repeating his win (if not the jaw break). Norton lost the split verdict this time, yet he was still one of the top-three or four heavyweights in the world. Norton got himself a shot at recently crowned heavyweight boss George Foreman. Despite Ali shouting words of encouragement from the ringside in Caracas, “Big George” was too much for Norton, wiping him out in just two rounds.

Seven wins followed the Foreman hammering, including a revenge win over Garcia and a stoppage win over Jerry Quarry. And then Norton proceeded to be a thorn in Ali’s side for a third time. The trilogy fight, with the world title on the line, was the most agonising of the three fights for Norton. Sure he had done enough over the 15 rounds at Yankee Stadium, Norton broke down in tears when Ali was awarded the unanimous decision. Norton later said he was never the same after this “loss,” that he didn’t trust the boxing judges ever again.

Still, Norton had one great, great fight left in him.

The June 1978 battle Norton had with Larry Holmes tops many a list as far as the greatest world heavyweight title fight goes; the 15th round being a genuine classic three minutes. Norton, having been awarded the WBC title that had been stripped from Ali for refusing to fight Norton a fourth time (instead boxing Leon Spinks in a revenge rematch), gave it everything he had in an effort at keeping the belt he’d been given. And Holmes gave it everything he had. The result was a sensational fight.

Once again, though, Norton fell short on the cards, losing this one via split decision. Norton was in many ways one of the unluckiest heavyweights ever. The Holmes fight pretty much signalled the end for Norton, although he did fight on for a while, having five fights. But the KO losses to Shavers and then, in 1981 in his final fight, to Gerry Cooney showed Norton it was time to go.

Norton’s final record reads 42-7-1(33). You could argue how three of these losses should not be on Norton’s record. In terms of greatness, Norton inevitably falls a little bit behind Ali, Frazier, Foreman and Holmes, but he was the fifth greatest heavyweight of the 1970s. This is no small distinction considering the vast number of fine heavyweights who were at the top of their game during that talent-rich decade. 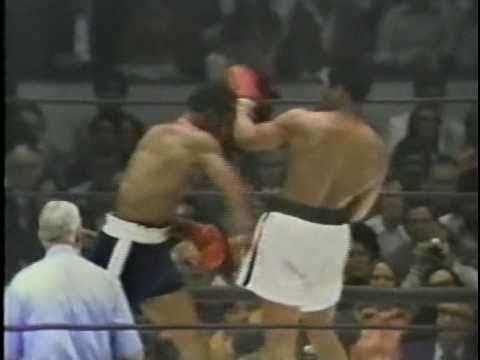