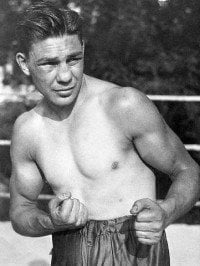 How truly special the sport of boxing was back in the “Roaring Twenties,” a time when, without hesitation, without any slick demands, the two best in the world regularly fought one another – Why? To show, to prove – to themselves mostly – who really was the best. Case in point, the absolute epic that took place today at a swiftly sold-out Polo Grounds in New York, between complete and utter legends (today the word is so grossly overused) Harry Greb and Mickey Walker.

If such a majestically mind-boggling battle of greats, of tough guys, of men literally willing to die in the ring in the search of victory, took place today, we fans would gladly, proudly, part with anything from $150 to $250 dollars to watch the war live in the comfort of our armchairs. And we’d have paid such money without flinching; flinching being a term totally foreign to both Greb and Walker.

The term, ‘born tough,’ or as boxing historian Mike Tyson might say, ‘authentically tough men,’ is the only adequate description one can use when talking about Greb – who finished with a truly incomprehensible 261-17-19(48) ledger, this compiled by the occasion of his untimely death at age 32, and Walker, who exited with a little less frightening but still bewildering 131-25-2(60) record. And the fact that they fought each other, with neither hesitation nor the need for coercion on the part of either born fighter, makes their brutal and unforgettable 15-round dust-up all the more special; all the more magical.

Greb, at the time the world middleweight king (at a time when EVERYONE knew who the champ was, in each division), met Walker, the reigning welterweight king. By this stage in his 12-year pro career, Greb had engaged in no less than five torrid fights with light-heavyweight (and future heavyweight champ) Gene Tunney. Walker had won the welterweight crown and he had defended it numerous times, but “The Toy Bulldog” wanted the middleweight title. What followed was brutal, savage, sensational and a whole lot more.

Walker attacked the body in the early going, with Greb pacing himself. The battle of attrition was on and those fans who were lucky enough to have been in attendance settled in for a classic.

It was a close fight all the way, until Greb poured it on in the championship rounds. Here, legendary writer Damon Runyan describes the end of the showdown:

“One tremendous splurge of wild fighting in the 14th round, during which he had Mickey Walker tipsy and teetering from his smashing punches, probably saved the title of middleweight champion for Harry Greb, the “Pittsburgh Windmill” here tonight. Walker made a determined attack on the the “Windmill’s” body, round after round, and frequently hurt him with left hooks to the stomach and under the heart. Greb took a lead in the early rounds, loafed a bit and had been lagging along a bit behind up to the 14th when he suddenly clipped Walker on the chin with a swinging right that dazed the fighting Irishman from New Jersey. Walker backed into his own corner as Greb emptied every punch in his locker on him. Walker outfought Greb in the 15th and last round but Greb had offset anything Walker might now do. There was little demonstration as Joe Murphy, the veteran announcer, raised Greb’s soaking glove.” -Universal Service (reported by Damon Runyon)

But there was more to come, and a legend was born.

According to varying reports of the time, Greb and Walker later ran into each other, quite by chance, at a nightclub. Both men were partial to a good, well earned drink after a fight (or even just before a fight if some stories are to be believed) and hours after their exhausting rumble the two still had energy to burn. Some reports say the two slugged it out, in an unplanned rematch, in the nightclub, with Greb winning again. Yet other reports, perhaps fanciful, say Walker cracked Greb with a sucker-shot and knocked him out cold.

Whatever the case (and there is surely more than enough material here to make one fine movie) both men enjoy a special place in boxing history today. Greb and Walker were unimaginably hard men, and though we still love the watered down version of the sport we have today, it is men like these two who make us look back with wonder on how untouchable the sport of boxing once was.

Greb died in October of 1926, suffering heart failure whilst undergoing surgery on his nose. Walker lived into old age, passing away at age 79 in 1981.