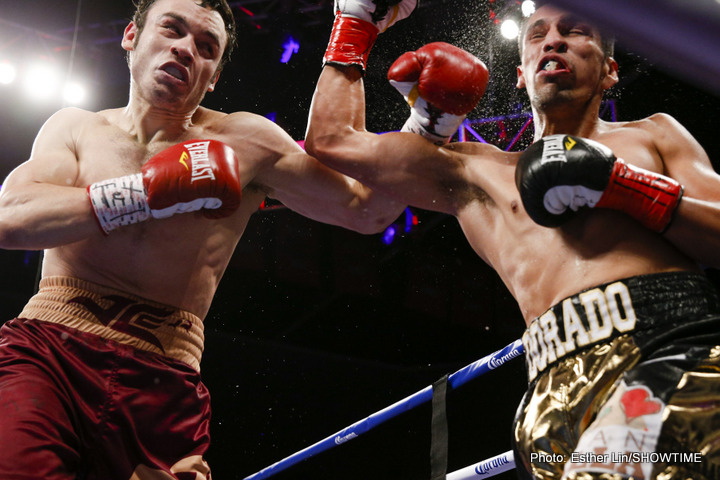 Mexican living legend Julio Cesar Chavez maintained an incredible work ethic throughout his great career and it was this discipline and hard work that was a big factor in his success. Julio Chavez Junior has inherited some of his father’s skills and toughness yet, as fans are well aware, Junior has had his share of problems when it comes to retaining both focus and discipline; what with the 30-year-old’s notorious problems making weight.

And today, when speaking on ESPN Deportes radio show, A Los Golpes, Chavez senior had some harsh words for his son after he found out Junior had broken training camp at Big Bear, where Chavez Jr. is training for as supposed shot at WBC middleweight champ Badou Jack.

“I’m going to come right out and say it because I can’t keep covering up,” Chavez senior said. “if this young man, who is my son, keeps with this lack of discipline ..this irresponsibility that he has, I just recommend that he retire and doesn’t fight anymore – with all due respect, the truth is I’m worried because this kid wants to do things his own way, train when he wants, do what he wants, and that’s not how it works. I can’t deal with this kid anymore, I’m disappointed with his apathy and his lack of discipline and honestly, I don’t know what to do.”

For his part, Junior, said he had left Big Bear merely to visit his doctor in Los Angeles, to have his previous heel injury checked out. Chavez Jr also claimed training is going very well for the planned April 30th challenge of Jack.

“I don’t know why he said that,” Junior said to ESPN Deportes. “Maybe he’s mad because I don’t do things like he wants. But I’m not a little boy, I’m 30 years old and I know what’s good for me. I’m not dumb, we’re two months away [from the Jack fight], but we’re on time and in shape. I know that this fight can change the history I have made for myself…all of the negativity is in the past.”

It would be interesting to know what poundage Chavez Junior is tipping in at right now, as well as to hear what his trainer Robert Garcia makes of things. The Jack fight, if it goes ahead, will likely be the last chance for Junior to live up to his initial promise. It’s obvious his father has given up on him and who knows how “The Son of The Legend” will be able to perform without his father’s backing and support. The Jack fight will be very much a case of win or bust.