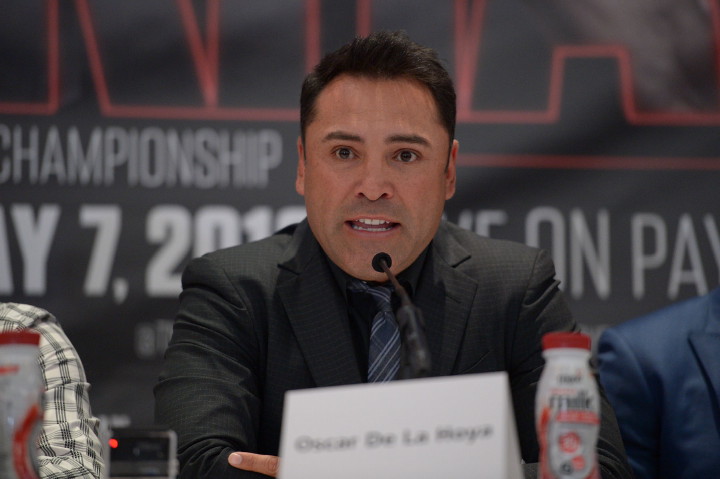 If Britain’s Amir Khan, who has never boxed above the welterweight limit before, manages to upset middleweight champion Saul “Canelo” Alvarez in May, the former 140-pound champ will have to do it all over again. The Mexican’s promoter Oscar De La Hoya, perhaps edging too far on the side of caution, insisted on a rematch clause just in case Khan pulls off the upset of the year on May 7th.

A Khan win would be great – at least it would be great for Khan himself, for British boxing and for all fight fans if the first fight between he and Canelo is a great one, but a Khan victory would further delay the middleweight showdown the entire world wants to see: Alvarez against Gennady Golovkin. As to how a Khan win over Canelo would diminish the marketability of a Canelo-GGG clash, that’s another issue. But Khan, if he does score the upset in May – and he is not without his backers, David Haye for one – will surely never agree to fight Golovkin; and why on earth should he! Khan taking on a 155-pounder he is actually a little bit bigger than is one thing, but to be expected to fight the unbeaten terror from Kazakhstan? Forget it.

Despite his caution in insisting on the rematch clause, De La Hoya, speaking at yesterday’s big press conference in London, said he is confident a Canelo-Golovkin fight will happen soon; even if his man does have to fight Khan a second time beforehand.

“If Amir Khan beats Canelo, we’ll obviously do the rematch,” Oscar said yesterday, as quoted by The Guardian. “But I’m very confident. I like Golovkin, he has a great style, he’s a real fighter and he’s created a mystique that I love. It’s just a matter of time. Believe me it will happen very soon.”

Golovkin is managing to remain focused on his April defence against Dominic Wade, an even greater underdog than Khan is against Alvarez, but he is sure to be thinking about Canelo, and probably hoping he gets the win in May and then agrees to face him later this year. But if Khan can pull the rug from under Canelo, if the Bolton star who has always gone after the big fights can score THE win of his career, that middleweight unification showdown will have to wait.

Who will you be rooting for come May 7th?