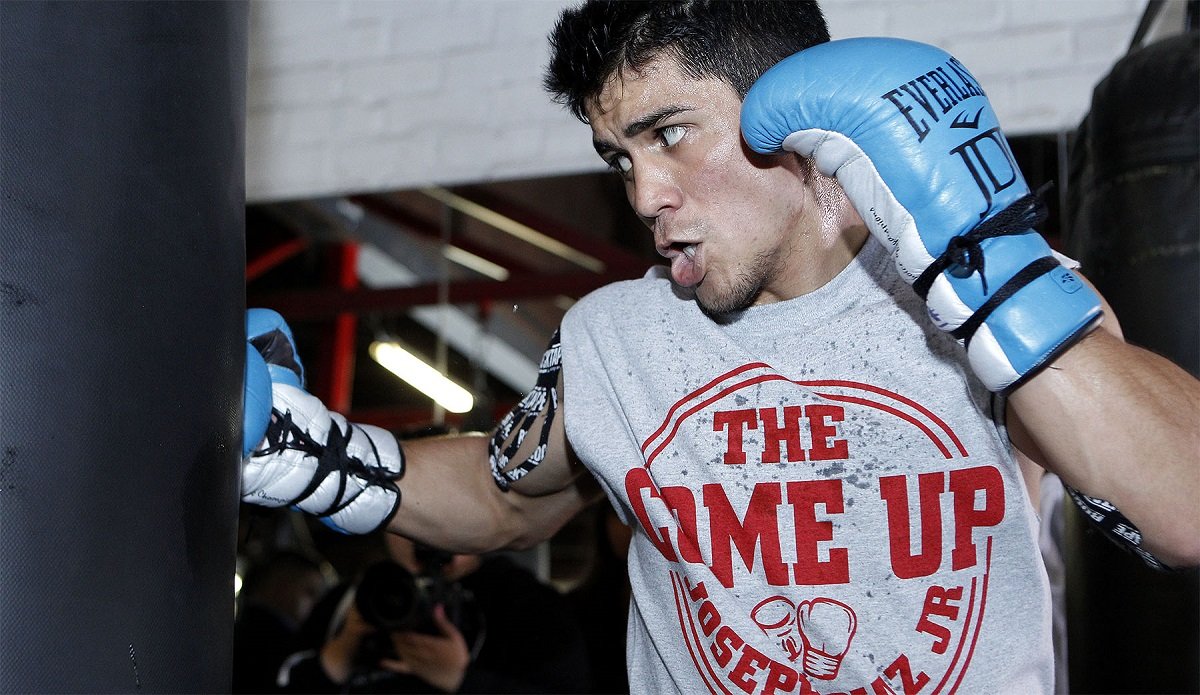 Here’s what Joseph Diaz, Jr. had to say at today’s workout:

“I have no hostility toward Gary Russell Jr. I respect Gary Russell Jr., and I know what he brings to the table. Ever since I was brought up as a professional fighter I was always humble and I was always down to earth. Now that I have the opportunity to become the champion that I know I can be I feel like I’m more outspoken because I know that the opportunity is finally here, and I know what I’m capable of doing.

“I want to fight the best at 126 pounds and I want to show all the fans that I’m the real deal. By fighting and bringing on the toughest 126 pounders like Gary Russell Jr., and defeating him, that’s going to showcase to the whole boxing world that I am the real deal and I will be the king at 126 pounds.

“He’s been inactive and used to fighting just once a year now. But what makes him so dangerous is he’s very, very speedy and has great hand speed. And not only that but he knows how to use his hand speed and counter when guys are opening up. My father and I know what we are bringing to the table, and I’m fast, as well. I have a very high boxing IQ and I’m very powerful in there. I know how to land sneaky body shots and I’m a big 126-pound fighter, and that will be the key to victory. He will try and land his power shots, but they’re not going to be effective because I’m the bigger fighter.

“I need to bring this WBC belt back to L.A. and to South El Monte. I’ll be the first champion coming out of there and I’m a role model to a lot of youth. That’s what makes me hungry and I’m one hundred percent confident I’ll be the champion and we will have a big parade in South El Monte, and you’re all invited!

“This is an opportunity of a lifetime, fighting for a world title against Gary Russell Jr., is a dream come true. I feel like I’m so much better a fighter now than I was at the Olympics. If feel like if I fought that kid who was in the Olympics now I’d stop him in the first round. My management and trainers have groomed me for this fight on May 19. I fought some undefeated fighters, some experienced fighters and some real live dogs. I just feel like all the experience I’ve gained in the past will serve me well.”

(ABOVE: Oscar Duarte, Romero Duno and Raymond Muratalla pose for the media ahead of their fights on the May 17 edition of Golden Boy Boxing on ESPN at Fantasy Springs Resort Casino)

Fighters from the May 17 edition of Golden Boy Boxing on ESPN also participated in the workout. In the main event, Romero “Ruthless” Duno (16-1, 14 KOs) of General Santos City, Philippines will take on Mexico City’s Gilberto “Flaco” Gonzalez (27-4, 22 KOs) in a 10-round lightweight fight. The co-main event will feature Oscar Duarte (13-0-1, 9 KOs) of Parral, Chihuahua, Mexico against Rey Perez (22-9, 6 KOs) in a lightweight bout scheduled for 10 rounds of action. Raymond Muratalla will make his professional debut in a four-round lightweight battle.

“I want this victory to prove to Golden Boy Promotions that they made no mistake in putting me in the main event. In 2016, no one knew who I was. But then I jumped at the opportunity and now I’m in the biggest fight of my career. I’m ready to impress everyone and give a great victory.”

“I feel really motivated. I get to be co-main event on an ESPN card! I’m ready to go out there and win without a doubt. I know after this, only good things wait for me. I love training in the Coachella desert with Joel Diaz — making weight is so easy when it’s so hot out there! I’m excited for the next door to open after this.”

“I’m making my pro debut. I hope I impress the boxing fans and let them know that I’m someone to watch. I have a really good amateur record with 74 wins and only six losses. I’m currently training with Joel Diaz in Indio and it’s been a great experience. I’m ready to leave an impression.”

(ABOVE: Rafael Gramajo, Javier Molina and Jessie Roman pose for the media ahead of the June 1 edition of LA FIGHT CLUB at Belasco Theater and televised on EstrellaTV)

“We had a really tough camp this time around because I wanted to be ready. At the end of the day it’s just business, but we’re still friends.

“We were in the amateurs together and even though he was a couple years older and a little heavier, we still had the opportunity to spar against each other for a couple rounds. I’m fully aware of what I’m facing. This is my opportunity to show everyone what I’ve got.”

“Unfortunately, things didn’t work out with my opponent [Pablo Rubio Jr.], but I was ready catch some sharks. I’m ready to face whoever and wherever. I’ve been training hard, so I’m ready to fight anyone that night.”

Russell, Jr. vs. Diaz, Jr.is a 12-round World Championship fight for Russell, Jr.’s WBC’s Featherweight Belt presented by TGB Promotions in association with Golden Boy Promotions. The fight will take place on Saturday, May 19 in a clash live on SHOWTIME (10 p.m. ET/PT) from MGM National Harbor in Maryland.

Tickets for the MGM National Harbor show, which is promoted by TGB Promotions in association with Golden Boy Promotions, are on sale now and are available by visiting http://mgmnationalharbor.com/.

Tickets for the event are on sale and start at $25. Tickets will be available at the Fantasy Springs Resort Casino box office, by calling 1-800-827-2946, or by purchasing online at www.fantasyspringsresort.com.

Molina vs. Roman is an eight-round super lightweight fight presented by Golden Boy Promotions. The event is sponsored by Tecate “THE OFFICIAL BEER OF BOXING” and Casa Mexico Tequila. The Boxeo Estelar broadcast will air live on EstrellaTV at 10:00 p.m. ET/7:00 p.m. PT. The card will also stream live on EstrellaTV.com and on YouTube via LBI Media, Inc.’s Fenomeno Studios. Mark your calendars and buy your tickets for the upcoming shows on July 6, Aug. 10, and Oct. 12.

Tickets for LA FIGHT CLUB start at the fan-friendly price of $25 and are available for purchase now at www.goldenboytickets.com and the Golden Boy Promotions Facebook page.