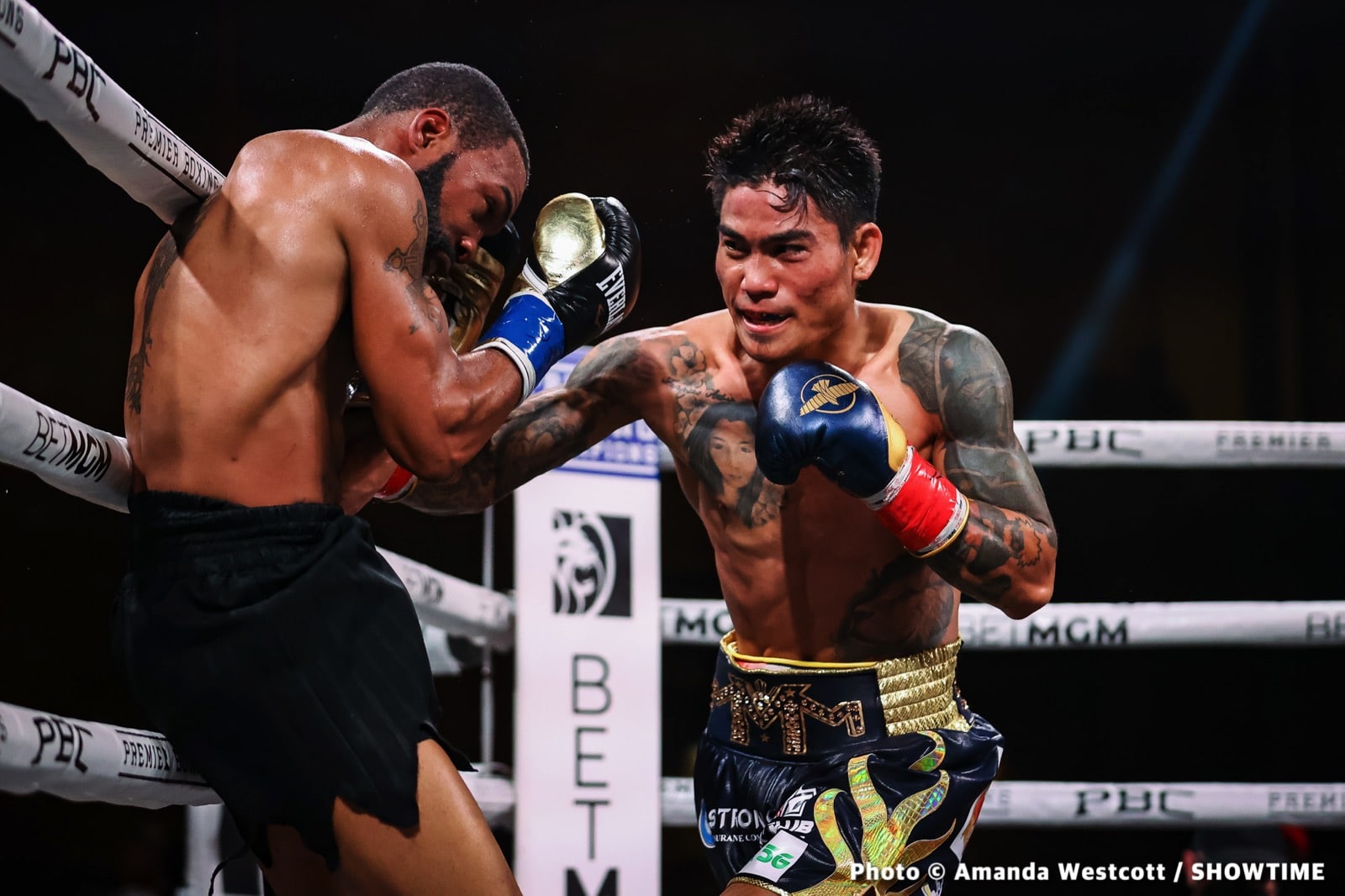 Russell came into the fight with an injured right shoulder, and he was unable to use that arm following the fourth round.

Surprisingly, Magsayo didn’t press hard for a knockout, which he should have done given that he was fighting a one-armed Russell for the last eight rounds of the contest.

Magsayo fought well during the early portion of the fight and then faded in the middle rounds. In the last part of the fight, the 26-year-old Magsayo got his second wind and retook control over the fight.

Afterward, Russell Jr, 33, was in denial about his loss, believing that he’d done enough to deserve the win. He said he wants a rematch with Magsayo. We’ll see if that happens or not, Russell Jr. can’t force the rematch because this was a mandatory defense, not a voluntary one.

But given how poor Magsayo looked tonight, it’s possible that he might give Russell a rematch because his chances of holding onto the WBC 126 are slim  & none based on his poor showing tonight.

Magsayo has good power, but he has serious gas tank issues, and he showed no real ring IQ in there despite having a great coach in his corner.

Gary Russell Jr. says he should have won

“I believe I have a torn tendon in my right shoulder,” said Russell Jr after the fight. “I haven’t competed in almost two years. This is what true champions do.

“I wanted to step into the ring and display my superiority regardless of the injury and whatnot. We did that and I gave him a boxing lesson.

“I gave him a boxing lesson the whole way through. I landed clean whenever I wanted to. I couldn’t use my right arm, but I was still able to throw effective shots and touch him at will

“I felt like I still won the fight. He had his hands full with a fighter with one arm and the whole fight I gave him a boxing lesson!”

It’s shocking that Russell Jr. knowingly went into his important fight with Magsayo with his shoulder injury.

It was a senseless move on Russell’s part for him to fight with an injury like that. Russell Jr. should have learned from Vasily Lomachenko that it doesn’t pay to fight with a bad shoulder injury.

Lomachenko lost his four titles to Teofimo Lopez in 2020 when he made the decision to defend against him while dealing with a shoulder problem.

Not only did Teofimo beat Lomachenko, but he walked away with his titles, choosing not to give him a rematch. If Russell’s lucky, his management at PBC might be able to get him a rematch with Magsayo.

“Hell yeah! Will he want a rematch?” said Russell Jr. when asked if he wants a rematch with Magsayo.

With Russell’s shoulder injury, it could be a while before he’s ready to return to the ring. It would be a good idea for Magsayo to go in a different direction for his next right rather than waiting for Russell Jr. to come back in a year or two.

He doesn’t fight very over, and it’s a waste for Mayayo to wait for Russell to come back in 12 to 24 months.

Better options for Magsayo’s next fight would be to face the winner of the Leigh Wood vs. Michael Conlan fight. Other excellent choices for Magsayo: Emanuel Navarrete, Rey Vargas, Stephen Fulton, or Murodjon Akhmadaliev.

In the chief support bout, light welterweight contender Subriel Matias (18-1, 18 KOs) stopped Petros Ananyan (16-3-2, 7 KOs) in the ninth round in a war from start to finish.

The hard-hitting Puerto Rican Matias dropped Ananyan in the ninth round, resulting in the fight being stopped.

Matias and Ananyan traded bombs for the first eight rounds before the powerful Puerto Rican KO artist ended matters in the ninth round.

Two years ago, Ananyan defeated Matias by a 10 round unanimous decision.