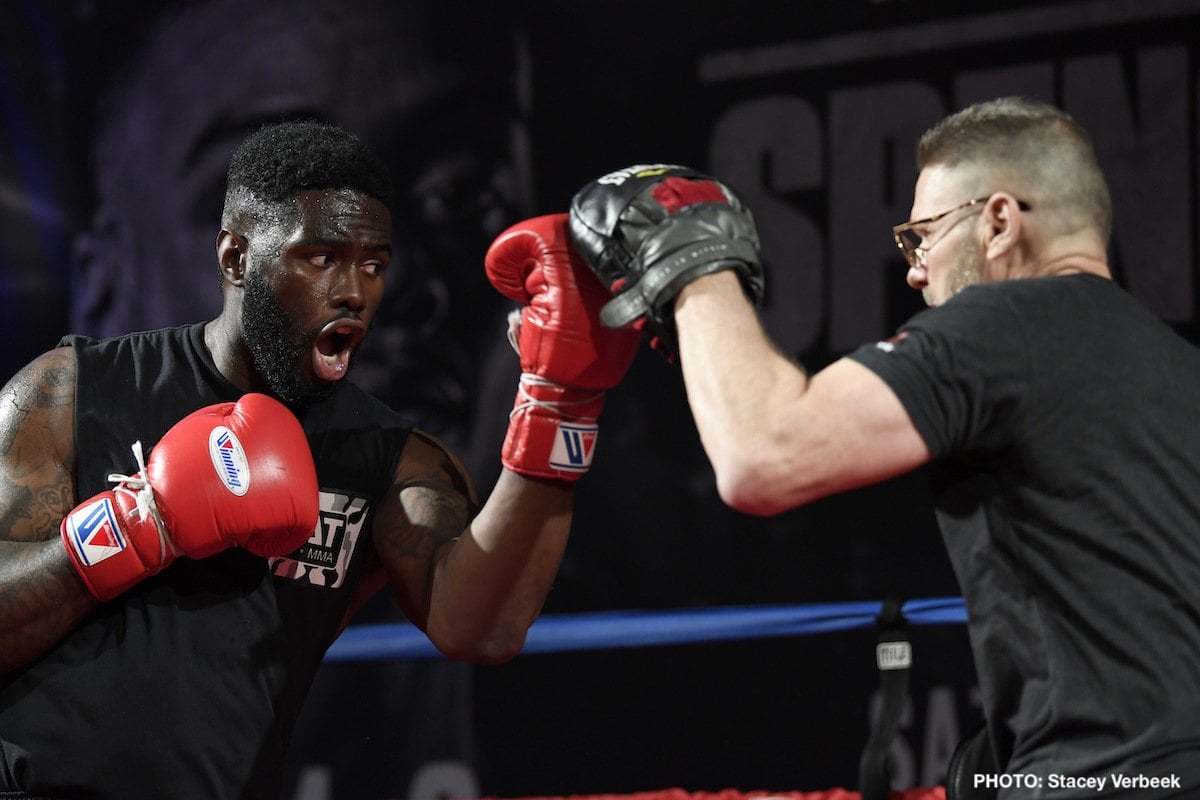 Exclusive interview by James Slater – 31 year old Jean Pierre Augustin says he will deliver a “big surprise” in his March 16th fight with established heavyweight contender Chris Arreola. The Haitian-born southpaw who lives in Boston has a good-looking 17-0-1(12) pro record but, as he says himself, Augustin – who may be familiar to film fans, as he has appeared in three movies – is an “unknown” fighter.

This, he insists in speaking exclusively with ESB, will change later this month as he boxes his “breakout fight” on the big Errol Spence/Mikey Garcia card:

Q: Do you see the March fight with Arreola as your breakout fight, your coming out party so to speak?

Jean Pierre Augustin: “Absolutely. Chris is an established name, he’s a veteran who has seen it all pretty much and this is a big step-up for me of course. But those people who are saying he will beat me, of course they’re saying that. Chris is the name and they all know him and no-one knows me, I’m an unknown. But this is my time now, Chris has had his time. It’s a changing of the guard, that’s what I’m looking at. People are in for a big surprise in this fight, a very big surprise.”

J.P.A: “I was finishing off a film I was acting in, and I was also looking for a new promotional deal with my boxing career. Now I’m signed with Al [Haymon] and PBC and this will be my first fight with them. I’m not at all concerned with rust, Chris himself had over two years out, and then he had a little comeback fight (on December 1st, last year) so he himself has not been active. Basically, when the bell rings, everything like that goes out of the window anyway. As long as you can fight, that’s all that matters. And I love to fight. I would fight once a week if I could. I had ten fights in 2017 and it’s no problem to me to fight that often. Back in the old days of boxing, they did fight a multitude of fights a year, every year; and for me, fighting so often, it’s not that different to fighting at amateur level, where you fight five times a week.”

Q: For those who have not yet seen you fight, describe your style.

J.P.A: “I’d say I’m a boxer/puncher. I use my legs a lot. I’m not the biggest heavyweight (at 6’3”) so I do use my mobility a lot. A guy like Chris, who is bigger than me, I’ll use my movement to stop from getting caught on the inside and to stop him from working me up close. My speed and movement get me out of reach, out of harms way.”

Q: You were born in Haiti of course but you are listed as being based in Louisville?

J.P.A: “I’m actually from Boston, but yes, born in Haiti. My former manager is from Louisville so we were going to have me based there and me billed as fighting from there, but we separated and that didn’t work out. I’m fighting out of Boston.”

Q: What would a win over Arreola do for you?

J.P.A: “The heavyweight division is really flourishing right now and this is my fight to get in the mix. There are so many names out there – Joseph Parker, Dereck Chisora, Dillian Whyte, Bryant Jennings and [Oscar] Rivas, the guy who beat Jennings. It’s not if I win [against Arreola] it’s when I win. I look forward to doing a follow-up interview with you after the fight.”

Q: What do you think to the fact that the big three – Wilder, Joshua, Fury – are all aligned with different networks and platforms now?

J.P.A: “The Fury deal with ESPN, that shook everyone – nobody saw that coming. Like everyone else, I’m just waiting to see how it all pans out. I hope the fact that they’re all on rival platforms won’t prove problematic towards getting the big fights made, but we’ll have to wait and see. But for me to get to that level I have to beat Chris and I know I will. Right now I have no nerves at all. That may change come fight week, but I know in my mind what I’m going to do and I know what I can expect from him – he has no idea what to expect from me. I can’t allow him to dictate the pace and I know that as long as I stick to my game-plan, what we have worked on in the gym, I will get the win.”

Q: Has anyone hurt you in a pro fight yet? Or in sparring?

J.P.A: “I’ve definitely been cracked, buzzed. But we’re heavyweights and any man above 200 pounds can hit. But when I’ve been hurt, I’ve never shown it. Each and every heavyweight you talk to has been buzzed and hurt, whether they admit it or not.”

Q: Can I ask you about your acting career? You have been in films like ‘Bleed For This,’ about Vinny Paz.

J.P.A: “Yes, I played a 154 pounder in the Paz film, Gilbert Dele. And I’ve played Big John Tate in a film (‘Heart, Baby’) and a mobster film I’ve just completed, that comes out soon. It was tough getting down in weight to play Gilbert Dele, I got down to about 185 pounds for that. For the John Tate part, I was back up to my usual weight. It’s a fascinating story but I must tell you, the John Tate film is not told in his favour (laughs).”

Q: What do you say to those people who say you cannot juggle careers, that you have to focus on boxing alone if you have any shot at making it?