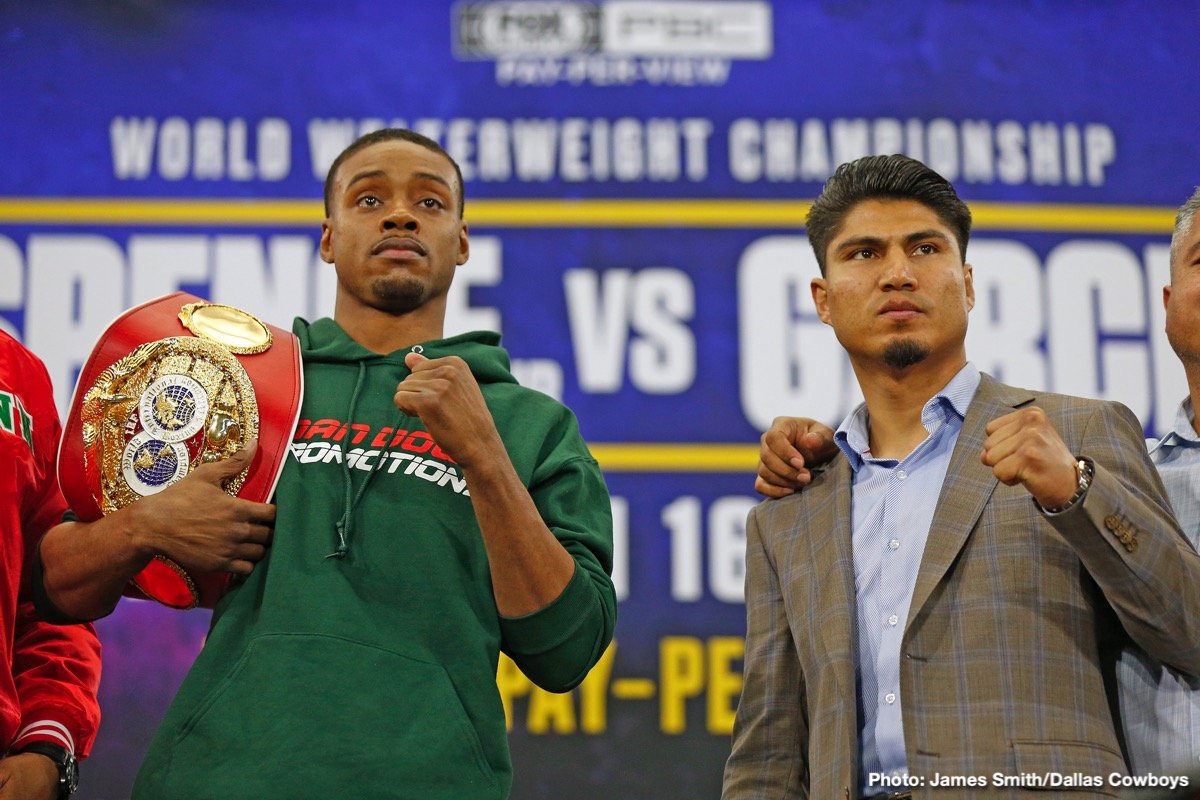 On Saturday March 16, 2019, just outside of Dallas, Texas, the AT&T Stadium in Arlington, Texas, will be transformed into an over sized boxing venue. The main event will feature a highly anticipated showdown between the reigning IBF welterweight champion, and hometown favorite, Errol Spence Jr. 24-0 (21 ko’s), versus challenger, four weight divisional champion, Mikey Garcia 39-0 (30 ko’s). Now that is as simple as the facts get, BUT, only if they were that simple…

The seemingly popular, and overly exaggerated, key point of interest in the main stream of pre fight discussion, surrounding this potentially ” fight of the year” match up, is the weight and size disparity between the reigning 147lb champion Spence Jr. ( 5′ 9 1/2″ – 72″ reach ) and challenger Garcia ( 5′ 6″.- 68″ reach ). There is no word as to what weight they both are training or walking around at, although, it is a known fact that Errol will be losing much more weight to defend his title against Mikey. The Garcia camp has reportedly added muscle mass and strength conditioning specifically for this match, which will be shredded down to maximize the 147lb weight limit. That said, there is a boxing adage which captures the true essence of this historical pairing; ” The good big man will always defeat the good little man.”…” Until he doesn’t!”

Throughout the history of our great sport of boxing, we have witnessed this attempted feat before. And the aforementioned boxing adage has been proven yet dis proven by many exceptional champions who had risen far above the state of mediocrity within the ranks of their weight divisions. By challenging the unexpected and overcoming insurmountable odds to be victorious, they have provided us with spectacular championship performances and have rightfully solidified their place within the boxing realm of greatness. Georges Carpentier, Ted “Kid” Lewis, Lew Jenkins, Henry Armstrong, Mickey Walker, Pernell Whitaker, Roberto Duran, Oscar De La Hoya, Sugar Shane Mosley, Floyd Mayweather Jr., and Manny Pacquiao. Just to name a few.

In a recent article by boxing journalist/author Thomas Hauser, which appears in “The Ring”, boxing trainer/ author/ commentator Teddy Atlas and Hall of Fame matchmaker Bruce Trampler discuss the importance of the proper evolution of a fighter. They collectively summarized ” When boxing was boxing, fighters had to go in tough and beat other equally talented fighters to be considered great. But boxing’s current business model deprives fighters of the opportunity to prove and improve upon their skills by fighting other great fighters. Now slick PR and marketing create the illusion of greatness.” Atlas further observed, ” No matter how good a trainer a fighter has, no matter how hard he works in the gym, a fighter learns what’s most important about the craft of boxing in fights.There’s no teacher like the fight itself. And the problem we have today is that the priorities aren’t centered around fighters learning the craft of boxing.They’re about navigating a fighter to a belt and getting him a name while traveling down the easiest path possible.” It was as if this article had been written to explore the two paths that have lead to the significance of this showdown on Saturday night March 16, 2019.

In one corner of the ring will be the hometown favorite, Errol Spence Jr., defending his IBF welterweight championship title. Not only will this be his third title defense since defeating former IBF champion Kell Brook for the title in 2017, it will only be his third title fight ever. Albeit, Brook was coming off a career ending defeat at the devastating hands of former middleweight champion GGG. Errol’s two title defenses have been against an unknown Carlos Ocampo ( June 16, 2018 ) and an aging warrior Lamont Peterson ( January 20,2018 ). Didn’t get much ring work in, both matches ended very early. The opposition leading up to Spence’s top ten ranking and title shot are void of any named ranked fighters rated by “The Ring”.

The champ has stated that this is his biggest fight. Furthermore, he will show something different, in spite of rumors coming from Garcia’s camp seeing holes in his style which has served him well the last 24 (21 ko’s) victories. Errol says that he can do much more than just move forward and press.

And coming out of the opposite corner of the ring, is the four weight divisional champion and challenger, Mikey Garcia. Of Garcia’s thirteen title fights, In the last two years Mikey has won four world titles in two weight divisions. On January 28,2017 ko’d Dejan Zlaticanin for the WBC lightweight title, July 29,2017 out boxed -12 round decision Adrien Broner for WBC junior welterweight Diamond title, March 10, 2018 destroyed – 12 round decision Sergey Lipinets for IBF junior welterweight and July 28,2018 out boxed – 12 round decision Robert Easter Jr. ( 5’11” -76″ reach) for IBF/WBC unification titles. Mikey has made it abundantly clear that he is on a mission to secure his place amongst the greats of boxing.

These days, outcomes in boxing are as unpredictable as the weather in Texas…Boxing is boxing, not black and white, lots of gray in between. Anything can happen, accidental head butt, a variety of unintentional or intentional fouls, tko, ko, poor judging, bad refereeing, we’ve seen it all!

Based on each determined and focused champion’s current position in their career, both in their competitive prime striving for that recognition of being the best, boxing fans just may be in for a special treat for a memorable evening.

And in closing, for what it’s worth…remember the last two main event boxing championship bouts that were hosted in 2010 at the AT&T Stadium in Arlington, Texas: