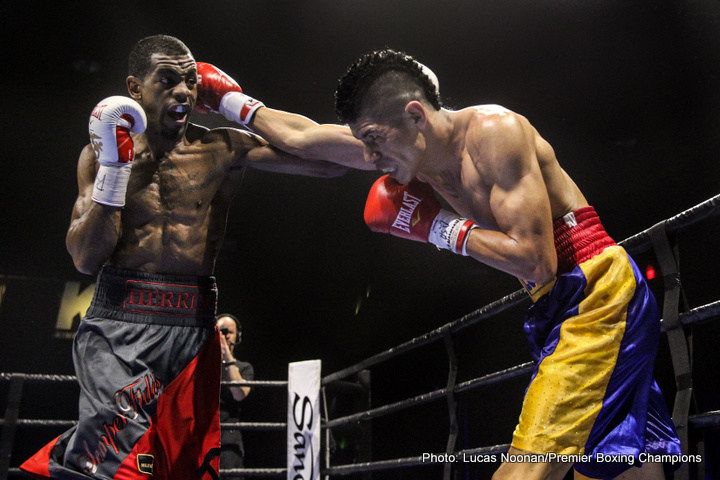 “I knew if I boxed smart it would show, but I didn’t think it would be that wide a margin,” said Herring. “He’s a very experienced fighter.”

Herring added, “I was trying to get rid of him early because he’s a dangerous guy. If you let a guy like that sit around too long there’s always the risk that you might get clipped with something and regret it.”

Herring, a U.S. Marine Corps veteran, hopes the win Tuesday night will launch him into world title contention in 2016.

Making his U.S. debut, the Magangue, Colombia native Flores put on a valiant effort, recovering from a flurry in the second round that would have sent most fighters packing.

In the fifth round, the 28-year-old Flores was ruled to have been knocked down twice, but disputes those calls by the ref. “Both times that the officials called it a knockdown and started counting were just slips. I didn’t actually get knocked down either time,” said Flores.

Flores added, “I know that (Herring) had the advantage tonight, and he outperformed me. But I’ll keep trying wherever my next opportunity comes.”

“I think getting a win like this over a fighter with Flores’ experience will help me gain a lot more respect. People seeing me win on my first PBC card on national TV on FS1 and FOX Deportes just helps raise my profile and I look forward to being back,” said Herring.

Martin, a 2012 National Golden Gloves Champion, controlled much of the fight from the outside using his superior footwork to evade Gomez.

The Harvey, IL native Martin said, “I could see his punches coming from a mile away, but I should have followed up a little more than I did tonight and let my hands go a bit more too.”

An owner of 340 amateur wins, Martin turned pro in 2013 and is yet to lose. That experience helped Martin keep his composure when Gomez taunted him repeatedly in the second round.

“We wanted to make Martin mad and get him to punch himself out if we could,” said the 29-year-old Gomez.

Martin responded to the talk of baiting saying, “I just stuck to my fundamentals, kept pumping my jab and setting him up for the next shot.

“I knew I hurt him with the uppercut. He walked right into it. And then when I threw the hook he couldn’t do anything,” said Martin.

Following the bout Gomez said, “I plan to retire after tonight. I care too much and fight too hard to be just another opponent.”

A member of the 2008 U.S. Olympic team, Cleveland’s Williams was able to establish himself early and get in a rhythm.

“The only time he was able to catch me with anything was when I got a little lazy,” said Williams.

Williams caught Tolmajyan with a big right hand in the fourth round, seemingly stunning Tolmajyan momentarily, but he kept his composure and didn’t allow himself to become overzealous.

“I was focused on boxing him and not so much worried about the knockout,” added Williams. “I knew I was winning the rounds.”

In the final frame, Tolmajyan, fighting out of Glendale, CA, caught Williams with a shot that nearly ended things.

Williams recalled, “It was an overhand left that he hit me with. And then he came after me again, but the ref and I made contact, so then the ref pushed me away because he didn’t want me to try holding on to him. But once I got my feet under me I was fine.”

However, Tolmajyan wasn’t impressed with Williams saying, “He wasn’t as good as we were expecting and I had him hurt with my left.

“I thought that I was winning the fight to be honest. I didn’t think I was going to lose the decision,” added Tolmajyan.

Williams concluded, “I hope to learn from my mistakes tonight. I got caught with a good punch in the last few seconds tonight, so I just need to work on consistency and fighting until the final bell.”