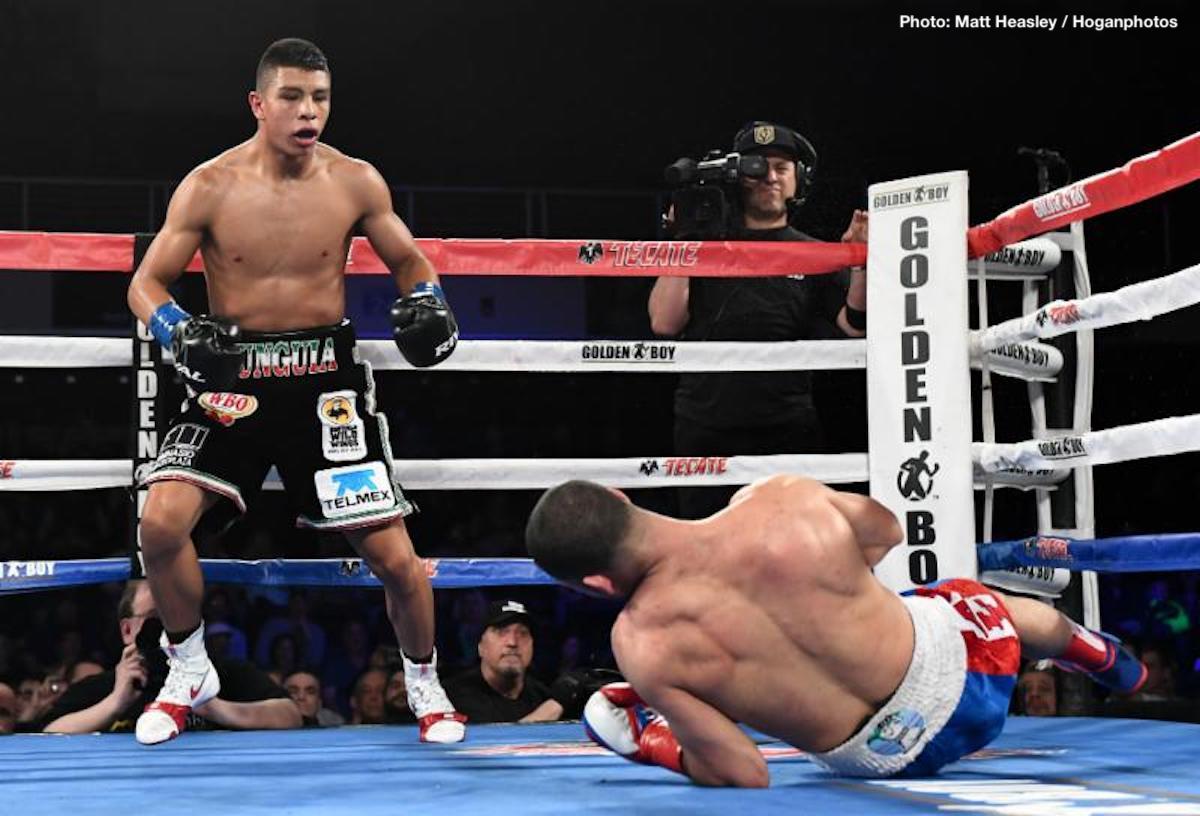 Jaime Munguia (29-0, 25 KOs), the newly-crowned WBO Junior Middleweight World Champion of Tijuana, Baja California, Mexico, will make the first defense of his title against former world champion Liam “Beefy” Smith (26-1-1, 14 KOs) in a 12-round main event Saturday, July 21 at The Joint at the Hard Rock Hotel & Casino, Las Vegas. The fight will be televised live on HBO Boxing After Dark beginning at 10:00 p.m. ET/PT.

Munguia is a dangerous 21-year-old puncher who has ended 25 of his fights by stunning knockout. Munguia has only fought twice in the United States, the second of which was for a last-minute title opportunity against Sadam “World Kid” Ali in May. Munguia used his enormous height and reach advantages to drop Ali several times before a thunderous left hook ended matters in the fourth round. The newly-crowned champion is excited to defend his new belt.

“I’m very excited and thankful with everyone that made this possible,” said Jaime Munguia.”I invite the fans to go and see me live or to tune in on HBO. I will defend my WBO title with pride and honor. See you in Vegas!”

Smith, the first of an impressive stable of brothers to win a world title, is a 29-year-old native of Liverpool, England. After scoring 20 impressive victories as a professional, Smith defeated John “Apollo Kidd” Thompson via seventh-round technical knockout to capture the WBO 154-pound title. Smith then lost the title against Canelo Alvarez in front of over 50,000 fans at AT&T Stadium in Arlington, Texas in an impressive show of heart. Smith has had three victories since, and after pulling out of his May 12 fight against Sadam Ali due to an illness, he is more than ready to regain the title that was once his.

“To go to Vegas and fight for a world title is every fighter’s dream,” said Liam Smith.”But it’s only an extra incentive to my main motivation – getting that WBO world junior middleweight title back around my waist.Munguia is obviously a dangerous puncher and I’ll have to be wary of him early on, but he’s never fought someone as good as me and a fully-fledged 154lb fighter. I can’t afford to look an inch past Munguia though. He’s world champion for a reason and with such a high knockout percentage, I’m going to have to be my best ever. Unfortunately for Munguia, that’s what I’ll be.”

In the co-main event, Alberto “Explosivo” Machado (19-0, 16 KOs) will put his WBA Super Featherweight World Title on the line as he faces undefeated No. 1 Contender Rafael “Sweet Pea” Mensah (31-0, 23 KOs) in a 12-round battle.

Machado, a 27-year-old of San Juan, Puerto Rico, is a big man for his division and boasts power in both hands. After unifying two regional titles with a dominant unanimous decision victory against Carlos “The Solution” Morales, Machado defeated Jezreel “El Invisible” Corrales by way of eighth-round knockout to capture WBA Super Featherweight Title in Oct. 2017. The hard-hitting southpaw promises to retain his title on July 21.

“One as a fighter knows the sacrifices that are made to become world champion,” said Alberto Machado. “Because of that, I will defend my title with blood and honor this July 21. Rafael Mensah is the mandatory challenger, and he possess great credentials, including an impressive record. That’s why I’m preparing more than ever to walk away with my hand raise in my first defense.”

Mensah is a 27-year-old contender of Accra, Ghana who made his professional debut in 2010. Since then he has steadily climbed up 130-pound rankings, earning his spot at the top of the WBA rankings and a shot at the title. Mensah is confident that he has the skills to outclass Machado.

“I know Machado and there is no doubt I can beat him,” said Rafael Mensah. “When I saw Machado, I said ‘Yes, I can beat you. You are not somebody that can beat me. You cannot beat Rafael Mensah. I will come and maybe not knock you out, but I will beat you in boxing and teach you a good boxing lesson.'”

“We’re excited to bring two world title fights to Las Vegas on July 21,” said Oscar De La Hoya, Chairman and CEO of Golden Boy Promotions. “Jaime Munguia exploded onto the championship scene last year in devastating fashion, and we’re delighted to showcase him once again on another HBO main event. The co-main event will also bring fireworks as Alberto Machado makes the first defense of what will be a very long reign.”

“I’m proud and excited that this Mexican Kid from Tijuana [Munguia], who’s the hottest fighter in boxing today, will once again fight on July 21 against the tough Liam Smith,” said Fernando Beltran, CEO of Zanfer Promotions. “I know he will prevail again in spectacular fashion like he always does.”

“Liam Smith was very confident of beating Sadam Ali, but unfortunately the allergic reaction he suffered temporarily sidelined his plans,” said Frank Warren.”Munguia looked impressive beating the former champion, but Liam actually feels he is a better stylistic match up for him than Ali would have been.I’m very confident Liam will be recapturing the WBO Junior Middleweight Title and bringing it back to the UK.”

“When Jaime Munguia made his HBO debut this past May, he put the division on notice with a spectacular knockout and captured a 154-pound title”, said Peter Nelson, Executive Vice President, HBO Sports. “He looks to keep the momentum going on July 21 as he takes on his mandatory challenger Liam Smith, who hopes to take the title back to his native UK.”

The rest of this undercard will be announced shortly.

Munguia vs. Smith is a 12-round fight for the WBO Junior Middleweight World Championship presented by Golden Boy Promotions in association with Zanfer Promotions and Frank Warren. Machado vs. Mensah is a 12-round fight for the WBA Super Featherweight World Title presented by Golden Boy Promotions and Miguel Cotto Promotions in association with Don King Productions. The event is sponsored by Tecate, “THE OFFICIAL BEER OF BOXING” and Casa Mexico Tequila.The event takes place Saturday, July 21, 2018 at The Joint at the Hard Rock Hotel & Casino, Las Vegas. The fight will be televised live on HBO Boxing After Dark beginning at 10:00 p.m. ET/PT.