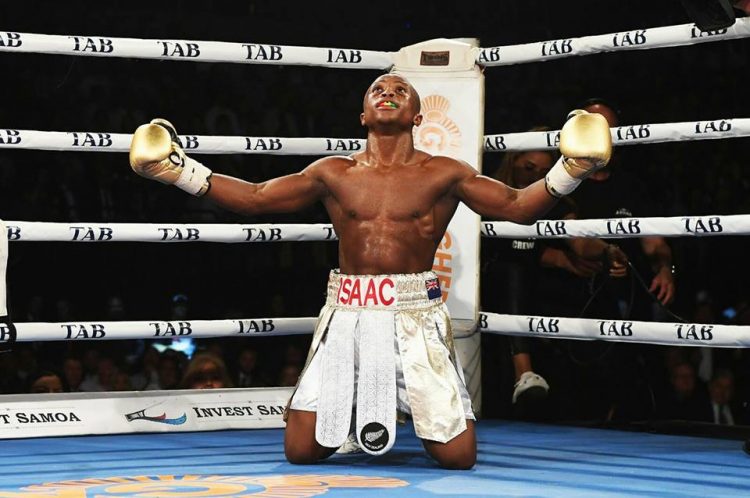 WBO junior featherweight champion, Isaac ‘Royal Storm’ Dogboe and his dad/trainer, Paul Dogboe are urging countryman, Rafael Mensah to believe in God, go all out and fight for what belongs to him to make himself, his family and Ghana proud on Saturday night when the man nicknamed ‘Sweet Pea’ steps into the ring against Alberto Machado of Puerto Rico for the WBA super featherweight title of the world.

Dogboe who defeated hitherto also undefeated Jessie Magdaleno in Philadelphia in April to become Ghana’s youngest ever world champion at 23 and his dad both believe there’s nothing that should stop the undefeated Mensah (31-0, 23 KOs) from adding his name to the legendary list of Ghana’s boxing world champions with revered names like Azumah Nelson, D.K. Poison, Ike Quartey, Joshua Clottey and others.

Mensah has been training with former Mike Tyson assistant trainer, Stacey McKinley in Florida since arriving in the US at the beginning of the year and faces the also undefeated Machado (19-0) as co-main event with Jaime Munguia’s WBO junior middleweight title defence against Liam Smith at the Hard Rock Hotel and Casino in Las Vegas promoted by Golden Boy and will be televised on HBO.

“I watched him fight once, he is very skilful and I know he is going to win it because he has been training for over six months for this fight. He has to win because he has to win it so Ralf we are supporting you with our prayers. Go and get him and bring the title home,” Dogboe Snr added.

Even more philosophical was the world champion, the highly religious Isaac Dogboe who turned into a preacher with his inspirational message to Rafael Mensah.

“Before I went to fight for the world title against Jessie Magdaleno, one thing that my grandfather, Torgbui Sri said to me was that I should hold on to my God dearly and that I should never ever forget that it’s God who is making everything possible for me,” said Dogboe who is back in Accra training before his departure to the US early next month to round off preparations for his next fight against Hidenori Otake.

“So what I can also say to Rafael Mensah is that he should hold unto God, the almighty creator dearly and everything will be well with him,” continued Isaac Dogboe who will face Otake in Glendale, Arizona on August 25.

READ:
Manuel Charr Aims To Defeat Trevor Bryan, Then Fight In The UK And Be “The Next Prince Naseem”

“Everyone is behind him, he should go out there and make himself proud, make his family proud, make the nation proud and in the end, everything he does, everything he puts his mind to, God will see him through,” Isaac Dogboe concluded.