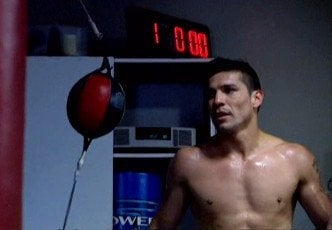 By Robert Jackson: Yesterday, I wrote a piece asking the question as to whether Julio Cesar Chavez Jr was just putting on an act for the cameras which showed him ‘slacking off’ while training for his September 15th fight against Sergio Martinez. HBO’s 24/7 docudrama featured Chavez Jr. deliberately missing scheduled training sessions, sleeping in, and not training at all in one case. In fact Chavez Jr’s body didn’t look as toned as it could be to engage in an upcoming professional fight.

To Chavez Jr’s credit his 7 day weigh-in had him weighing the same 167lbs as Sergio Martinez weighed in at. For a much bigger, heavier man that says that Chavez Jr IS preparing but playing mind games with us all.

All the while Chavez Jr was supposedly missing training sessions, Sergio Martinez was shown training like a machine with the intention as he put it to make Chavez Jr. “regret taking the fight”. Martinez was shown resting in a hyperbaric chamber to increase his blood-oxygen uptake. Maravilla has been shown executing different drills, conditioning, sparring and bag work to get him ready for battle. A lot of discipline and seriousness has been exercised on the Martinez side of things to be ready on fight night. Maybe a little too serious?

Sergio Martinez is today recognized as the #3 P4P fighter in the world and has expressed his goal to be #1. A couple years back the WBC (lineal) belt which Julio Cesar Chavez Jr now wears was his. Martinez has felt the slight of being stripped by the WBC for whatever reason, and walks around with a chip on his shoulder because of that slight. The stripped belt was then given to Sebastian Zbik and a championship fight was made between the new champion and Julio Cesar Chavez Jr; which Chavez Jr won. Since then Martinez has been calling out Chavez Jr in the hope of regaining his championship and only recently was that fight made which will be fought this coming Saturday. Martinez has always felt that Chavez Jr is a paper champion having had the WBC title basically given to him and now he wants to TAKE it away from him.

So all of the intensity, discipline and seriousness surrounding Martinez is for that purpose. Martinez knows at 37 he has more to lose than Chavez Jr and even being a P4P fighter which Chavez Jr is not, Martinez is having to take a $1.4M purse compared to his opponents $3M purse. This last insult added to injury would make anybody serious.