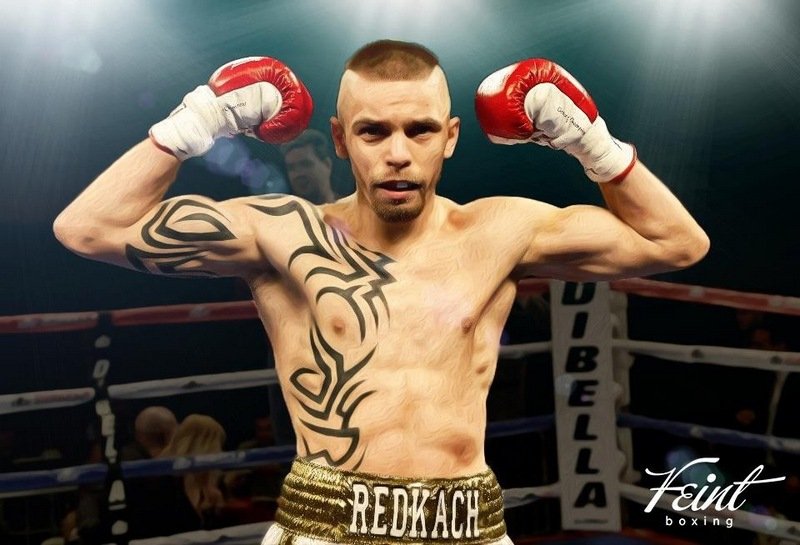 One of the best up and coming contenders of 2014 is undefeated Ukraine Lightweight, Ivan “The Terrible” Redkach (15-0, 13KOs, 1 NC) who has knockout 87 percent of his opponents and is ranked number 13 by the World Boxing Council.

Redkach is highly regarded by many boxing experts including ESPN`s Dan Rafael, Steve Kim of Maxboxing.com, Ring.TV’s Doug Fischer, among others, in large part due to his tremendous knockout power in both hands, going to the body really well and his all-out aggressive offensive style that overwhelms his opponents. The southpaw knockout sensation, looks to continue his destructive path up the lightweight divisional rankings in 2014 as he`s coming off two early knockouts in three fights last year with the other bout being a no-decision due to an accidental head-butt. He has stopped 12 opponents inside three rounds, six of which were in the first round.

The 27 year old pugilist from Los Angeles, California by way of the Ukraine, is back in the ring on Friday, January 17th as he elevates his level of opposition against Canada`s Tony “The Lighting” Luis (17-1, 7KOs) in a battle of two extremely good prospects, with the winner taking a step closer to becoming a contender in the lightweight division.

Luis fought in over 100 amateur bouts and captured seven Provincial Titles and three National Silver Mittens Belts. He has won two in row since an upset stoppage loss to Jose Hernandez. Their bout will take place on ShoBox: The Next Generation at the Cook Convention Center in Memphis, Tennessee in a ten round fight.

Redkach had a stellar amateur career were he amassed an incredible 260-40 record and was a 2008 Ukraine Olympic Boxing Team Alternate. He`s promoted by DiBella Entertainment, managed by Larry Army`s Elite Management and trained by Mario Morales. Here is an in-depth look at Redkach as he discussed his upcoming fight with Luis, the lightweight division and what his plans are for 2014.

James Stillerman: How is training going for your fight against Luis?

Ivan Redkach: Training for my bout against Luis has been great.  My manager, Army has brought in the best boxing team for me with my trainer, Morales, my strength and conditioning coach, Danny Garcia and my nutritional advisor, Vic Conte. I`m surrounded by a fantastic team that is made up of great individuals who make training fun and educational, but more importantly, they get me into unbelievable shape and ready to prevail over my opponent.

James Stillerman: How do you see this fight playing out?

Ivan Redkach: I see Luis getting hit by me often and running around the ring trying to get away from me.  I`ve spent some time perfecting my skill on cutting off the ring.  Make no mistake about it, he can run but he can`t hide, especially in a 22×22 foot ring.  I`ll catch him and I`ll defeat him because he has never felt power like mine.

James Stillerman: How significant of a step up bout is this for you?

Ivan Redkach: Luis is the best professional boxer I`ve faced in my professional career, so it`s a nice step up fight for me; however, I regularly spar with world champions in my weight class like Miguel Vazquez, so I`m more than ready for this bout.

James Stillerman: What is the biggest reason for almost all of your fights ending with knockouts?

Ivan Redkach: My fights end in knockouts because I`ve great power and accuracy.  It’s really that simple.
James Stillerman: What do you think of the lightweight division and where do you see yourself ranked in this weight class?

Ivan Redkach: I think I`m one of the better fighters in my weight class and I intend on proving it this January 17th on Showtime against Luis.

James Stillerman: What are your plans for 2014 and is there anyone you want to fight?

Ivan Redkach: I want to fight four or five times this year with my last fight being for a world title. Ultimately, this is a decision for my promoter, DiBella and manager, Army to make and I trust their judgment.

James Stillerman: What are your thoughts that some people including Dan Rafael of ESPN are considering you a significant prospect in the lightweight division?

Ivan Redkach: I`m happy to be recognized as a top prospect, nevertheless, I`m looking to transition myself into a contender this year and ultimately become a world champion.

James Stillerman: How would you asset how your career has gone thus far and is there anything you want to improve upon as you move forward?

Ivan Redkach: My career was given a significant boost this year when I hired Army to manage me because he has assembled a top team for me.  At this time, my goal is to improve and perfect my boxing skills, continue to win fights and prepare for a world title bout in the near future.

James Stillerman: What is your biggest accomplishment as an amateur?

Ivan Redkach: My biggest accomplishment as an amateur was being named to the 2008 Ukraine Olympic Boxing Team which was a great honor for me to represent my country and it was something that I`ll never forget.

Ivan Redkach: I moved to the U.S. because it`s the land of opportunity and it was the best decision for myself and for my boxing career to take off. I do miss my family and friends and I can’t wait to see them again soon.

James Stillerman: What is something that the public doesn`t know about you that you want to share?

Ivan Redkach: I`m the proud father of a beautiful girl. I`m a Dad first and a fighter second.

James Stillerman: How did you get the nickname “The Terrible”?

Ivan Redkach: My nickname comes from the Russian Ruler, Ivan “The Terrible”.  He was a ruthless leader and I`m ruthless in the ring.

James Stillerman: Is there anything else you want to talk about that I didn`t discuss?

Ivan Redkach: Tune in on January 17th on Showtime because it`s going to be a great fight. I want to thank all of my fans and I`ll not let them down this Friday night.