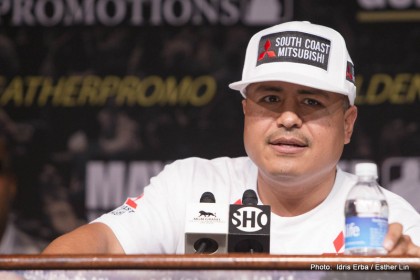 Oxnard-based multi time trainer of the year, Robert Garcia, has weighed in on the issue of female MMA fighter Ronda Rousey being set to appear on legendary boxing publication “The Ring’s,” January 2016 front cover, sarcastically suggesting that if she can make an appearance, then so can WWE’s ‘The Undertaker.’

The Golden Boy owned publication has provoked widespread furore among many serious fans, who see the inclusion of Rousey on the cover – a figurehead of a completely different sport – as a travesty and final nail in the coffin of what those same fans see as the magazine’s long and painful decline.

“I’m not upset [about it],” Garcia said to fighthubtv. “It’s got nothing to do with me. [Golden Boy CEO] Oscar De La Hoya wants it right? He has got so many young prospects and young fighters who are really doing good. Unless he’s gonna start promoting Ronda Rousey?

READ:
The Greatest, The Most Unappreciated: The Case For Ezzard Charles

“The way it looks, next edition we probably gonna have Triple-H or The Rock, or Undertaker! You know what I mean? Maybe a soccer player? I don’t know.”

Speaking to the same channel, De La Hoya readily conceded that Rousey’s inclusion was in part a flagrant attempt to draw widespread attention back to the magazine and boxing generally, attempting to capitalise on the enormous transatlantic popularity of the UFC champion and Judo/submission specialist.

“I think [her cover feature] is wonderful. I think she deserves it, and obviously it opens the doors for the women in boxing,” he said. “We’ve created so much attention with it worldwide, Ring magazine is getting attention it’s never, ever had in the history of it’s existence.

It was also not beyond an enthusiastic De La Hoya to say that if Rousey were ever to make the transition full time to the squared circle, then both he, and crucially Golden Boy, would be there to support and promote her.

“It’s created a big buzz in the boxing industry, so mission accomplished,” he added.