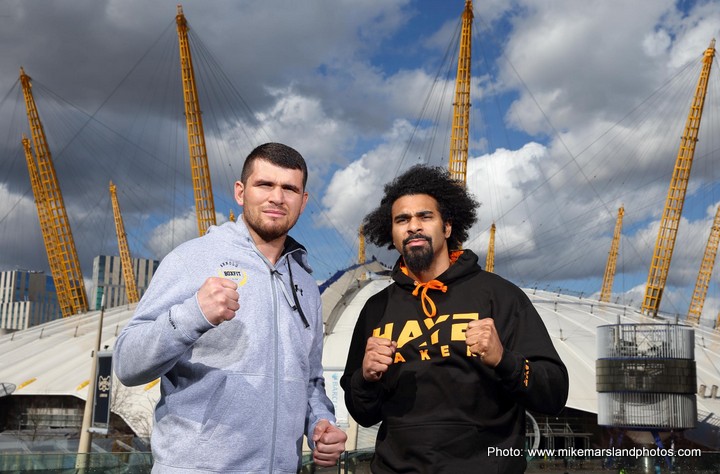 David Haye, the former undisputed cruiserweight ruler and a former WBA heavyweight champ, continues his comeback this Saturday, against unbeaten but little-known Arnold Gjergjaj in a scheduled 10-rounder at The O2 in London. Gjergjaj is young at age 31 and he has a good-looking 29-0(21) record. However, the critics have, well, criticised Haye’s choice of opponent, some even saying Gjergjaj represents a step down from Haye’s first comeback foe, Mark de Mori.

As fans know, Haye blew De Mori away inside a round back in January, and many experts feel a similar result will take place on Saturday. But Haye, in speaking with ESPN.com, defends his choice of opposition, stating how De More and Gjergjaj are “of the right standard” for a fighter who had been inactive for three and-a-half years as he had been after his 2012 win over Dereck Chisora.

“I think my opponents are the right standard,” the 35-year-old said. “I’ve only had one round in the ring in four years so the next guy is unbeaten, young, big at 6’5” and has long arms. He’s not fought any big names but that doesn’t mean he wouldn’t have beaten a big name. I don’t really like to listen to the naysayers. I’m fighting an unbeaten guy, he’s confident and he’s perfect preparation and then I will look into a big fight with Shannon Briggs in September.”

Haye claims a fight between he and 44-year-old Briggs is “the biggest non-title fight out there,” and that he will give the paying public what they want in shutting up the big mouth who has been taunting him with his relentless “Let’s go, Champ” mantra. That statement is open to debate, but Haye-Briggs will likely result in a sold-out O2 Arena. In fact, this Saturday’s Haye-Gjegjaj is close to sold-out. If Haye can pack in the fans whilst fighting, in the eyes of his critics, “safe” opposition, then of course he’s going to do just that. And Haye will almost certainly get a huge fight with IBF champ Anthony Joshua next year providing both men remain unbeaten.

Haye will likely blast Gjergjaj out quickly, and then do likewise to Briggs (if the fight actually happens, and Haye says he thinks Briggs needs to take “a couple more medical tests” first). If it’s competitive fights you want, don’t tune in to see Haye until he faces Joshua. But at least we can see Haye fight on free TV, with “Dave” channel once again showing the action on Saturday.