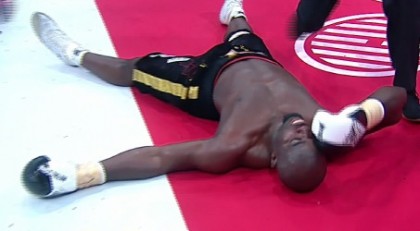 Has Alexander Povetkin’s reputation been forever ruined due to his coming up positive for a banned substance, causing the postponement, perhaps cancellation of his title fight with Deontay Wilder? Already, past Povetkin opponents are second-guessing their fights with the Russian star.

One of these fighters is Carlos Takam, who was KO’d in dramatic style by Povetkin in the 10th-round back in 2014. This loss marks the sole time the Cameroonian – who will fight unbeaten Joseph Parker in an IBF eliminator this Saturday in New Zealand – was knocked out in his pro career. Now, in light of Povetkin’s troubles, Team-Takam is wondering if anything untoward happened in their fight. Basically, did Povetkin take the substance ahead of that fight too, and did it aid his performance, enabling him to rally late and score that KO? This is what Takam’s promoter asked when speaking with The New Zealand Herald today.

“At the time of the fight [with Povetkin], when the medicine (Meldonium) was legal, maybe he was taking this medicine,” Christian Cherchi said. “It improves the blood, the stamina; in fact if you see the fight, what made the difference were the final rounds. My personal opinion, until the 7th-round, the fight was very close, maybe one point for Carlos ……It’s strange because in the last rounds he [Povetkin] was more fresh suddenly, I don’t know.”

Much as was the case when Mexican star Antonio Margarito was busted for using loaded wraps, fight fans and former opponents began wondering aloud if Margarito had maybe cheated in earlier, previous fights. This now looks like the unavoidable fate Povetkin faces. Povetkin deserves the benefit of the doubt at this time, however, and the WBC is in the process of investigating and uncovering as much evidence and facts as possible.

At the same time though, you cannot blame Takam and his team for wondering what might have been in their losing fight with the then unbeaten Russian