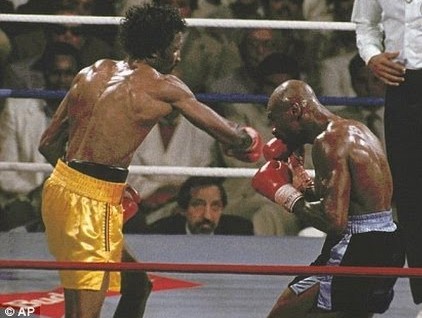 Once again, Marvellous Marvin Hagler and Thomas “Hitman” Hearns would box under the bright lights of Las Vegas, this time together, on the same night, against dangerous opposition. It was almost a full year after these two warriors had gone to hell and back against one other, and the grand plan for promoter Bob Arum was to set up a Hagler-Hearns II. Fans got two thrilling fights for their money this night in 1986 – one ending via violently quick KO, the other being an absolute war of attrition – as a rematch of the greatest fight in history was in the works.

Hearns, who has succumbed to the fists of a rampaging Hagler in those three mesmerising rounds of April of 1985 – but not before cracking Hagler with his trademark right hand, hurting him and also cutting him severely – boxed accomplished amateur, James “Black Gold” Schuler in the first of the two match-ups that saw the two stars go in against unbeaten opposition. And Tommy, looking as fast as ever and sporting a more muscled physique, utterly destroyed Schuler after just one minute and 13-seconds of action. A laser like right hand bomb to the chin sent Shuler down on his back and it was all over.

“Now we know Tommy Hearns can hit middleweights and knock them out,” exclaimed commentator and accomplished trainer, the late Gil Clancy. Hearns, who showed absolutely no ill effects from the Hagler loss, picked up the NABF middleweight title but what he really wanted was another go at the world ruler. Shuler, who lost his unbeaten record in falling to 22-1(16), sadly lost his life in a motorcycle accident just ten days after the fight.

Hagler, who like Hearns had taken 11-months off since the epic that took place the previous Spring, had a much, much tougher night’s work. The fearsome Mugabi had boxed a significant portion of his career as a light-middleweight, yet he was seen as a very serious threat to the middleweight king. With an intimidating 26-0(26) record, Mugabi was the betting underdog yet some experts felt he might spring the upset.

Hagler was making the 11th defence of his treasured crown and he was in no mood to let Mugabi ruin his goal of breaking Carlos Monzon’s then world record of 14 retentions. A punishing fight ensued, one that saw both men take punishment and have to dig deep. Mugabi displayed a fine chin, taking Hagler’s best shots, before the shaven headed warrior broke through and seriously his challenger in the 6th-round. It looked as though Hagler had seen off yet another challenger, yet the brave Mugabi sucked it up and fought back, with battle raging on for a further five torrid sessions.

The upper hand was largely with Hagler now though as, slowly but surely, the champion wore his man down; both mentally and physically. Finally, his will broken, Mugabi – who had been urged on by Britain’s Mickey Duff – went down in the 11th-round and sat out the count. Mugabi didn’t so much quit as have all his fighting spirit beaten out of him. But Hagler had paid a price for his victory.

Both men reportedly urinated blood after the fight and both men paid a visit to the hospital. Hagler didn’t know it at the time, but he had scored the final victory of his magnificent career. One man who felt strongly that Hagler had lost a step or two and was ready for the taking was none other than Sugar Ray Leonard. Sugar Ray liked what he saw and soon after the night of March 10th announced he was coming back to challenge Hagler.

The rest is history, and so too was any more serious talk of Hagler-Hearns II. But what would have happened if these two legends had fought again? Another great fight is a given, but could Hearns have changed tactics and gained revenge over the ageing Marvellous One? Or would Hagler have scored a second KO win over the former welterweight? Who knows. This sequel was never made and we fight fans are left to imagine what the storyline might have been had the two true greats rumbled once more.