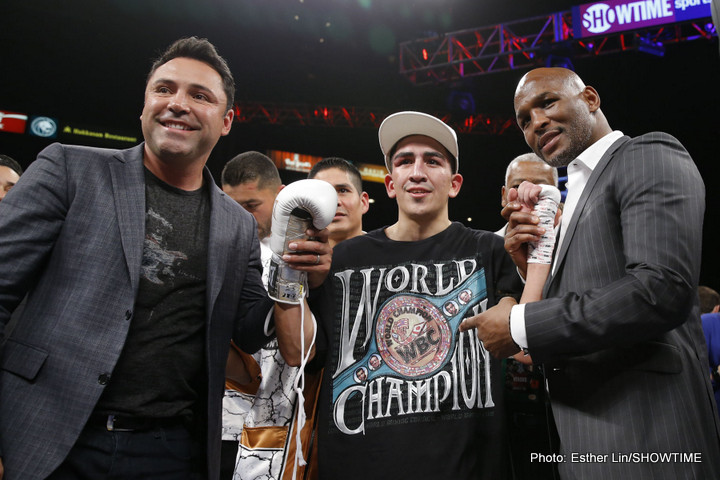 Oscar De La Hoya president of Golden Boy Promotions has come out and said that unification bout in the 122 pound decision have to happen as those are the bouts that the fans want to see. Both Santa Cruz and Rigondeaux have been in a few fights as of late with very underwhelming opponents. They have beaten some good fighters, but it’s the best vs. the best that gets the reaction from fans and that simply has not been happening.

Guillermo Rigondeaux was also mentioned at the post fight press conference of Santa Cruz last fight against Jesus Ruiz and it was said that if the fans did indeed want that fight, then that is the one that they would pursue. Now that Oscar De La Hoya has also mentioned something similar those comments may actually hold some weight.

The one thing, which has not been discussed by anyone thus far, is the influence of powerful adviser Al Haymon. Haymon manages Leo Santa Cruz and he has garnered a bit of a reputation for himself in recent years as a man who avoids extremely dangerous fights. Haymon tends to put his fighters in situations where they have good odds of coming out on top, and coming out on top in a Rigondeaux fight is far from a likely thing.

This is a great fight. As neither of the fighters are extremely well known to the casual fan this is the kind of fight that can sometimes slip under the radar, but this would certainly be one of the biggest fights of the year between two undefeated world champions in the peak of their careers. This is a star making performance which would certainly land the winner and spot in the top five pound for pound talents in the sport and could be a stepping stone to create a showdown with someone like a Scott Quigg or Carl Frampton later in the year to further unify the division.

If Leo Santa Cruz signs this contract he will get more respect than he would in winning another 5 fights against unknown fighters. Guillermo would certainly be the favourite in that fight and it is a testament to the fighters heart and spirit when they put themselves in situations where they are not expected to win and attempt to defy the odds and come up with a star making performance. Even in losing to Rigondeaux Santa Cruz can actually increase his stock if he puts on a good show and pressures Rigondeaux as Guillermo has hardly been touched in his time as a pro aside from the three knockdowns he has taken. With all this being said this a classic matchup of boxer vs. brawler and in the sport of boxing anything can happen.