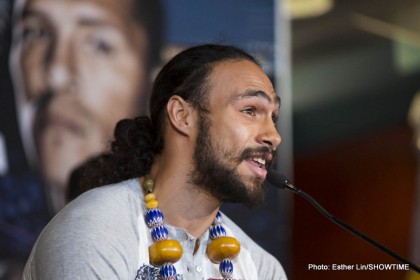 It`s official: Robert Guerrero will be facing Keith Thurman in the main event of the NBC Boxing premier set for March 7th. The undercard will feature Adrien Broner Vs. John Molina. Robert Guerrero has not fought since June of last year, where he earned a hard-fought victory over Yoshihiro Kamegai. Keith Thurman had an unimpressive win over Bundu but has kept himself more active than Guerrero. Thurman can punch and Guerrero can take a few to land his own. This should be a great fight and a big test for Thurman. We will see if Thurman’s power is too much for Guerrero or if he will he fold under Guerrero’s pressure.

As for the undercard fight, it looks good on paper for Broner because Molina is a warrior… but how much does he have left? He is coming off two consecutive losses against Mathysse and Soto. In the Mathysse fight he showed guts but took a beating that could have permanently changed him.

Broner turned down a $40 million dollar deal to be an undercard fighter on NBC. The $40 million deal would have guaranteed him $8 million per year for fights. That is too much for his status as a fighter regardless of how much he thinks that he deserves. Starting as an undercard fighter this year will definitely not bring him that kind of money for 2015 and another loss to his record will keep him on NBC and ESPN.